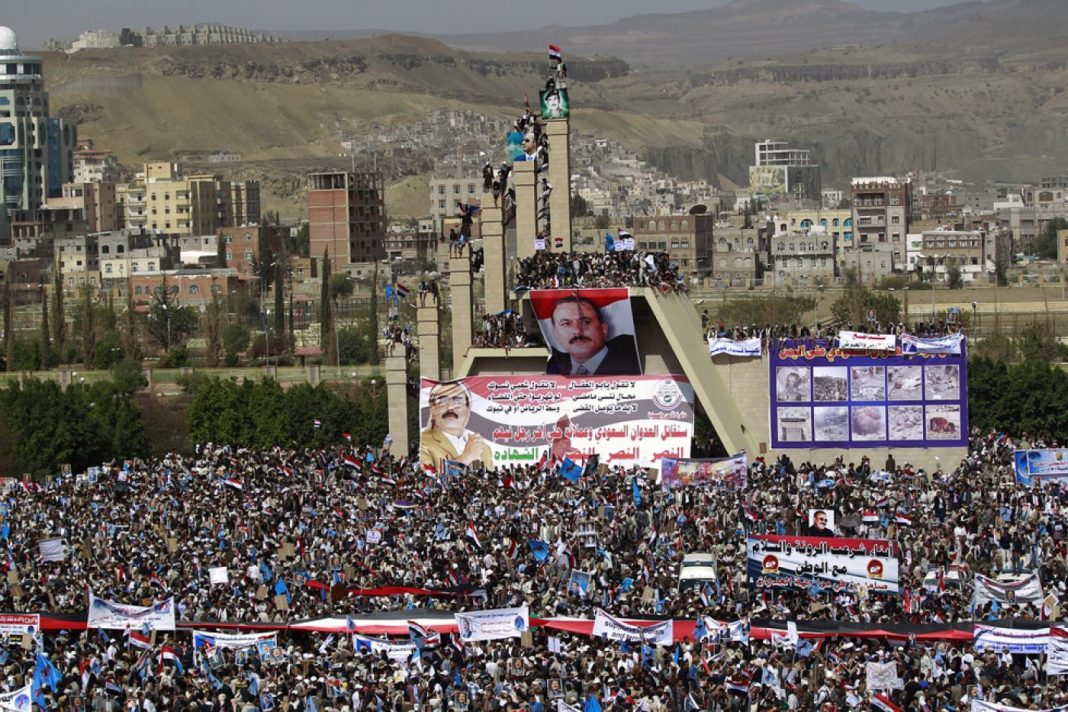 West News Wire: Thousands of people have gathered in Sana’a, Yemen’s capital city, and other parts of the conflict-torn country to denounce the Saudi-led military operation, as well as the debilitating all-out blockade, and to demonstrate their solid resolve in the face of the aggression.

Demonstrators flocked to the streets in Sana’a on the National Day of Resilience to reaffirm their fortitude in the eighth year of the Saudi-led onslaught, and to pledge that their sacrifices will continue until ultimate victory.

The attendees hoisted Yemeni national flags and conveyed their intense hatred of Saudi atrocities in Yemen.

The demonstrators also voiced their strong support for the latest drone strikes by Houthis against oil storage facilities in Saudi Arabia, stressing that such attacks will deter the Riyadh regime from its aggression and will break the cruel siege on Yemen.

“We call on invading countries to stop their aggression, lift the siege, and take lessons from losses suffered over the past seven years,” the statement also read.

“We reaffirm our firm adherence to our principled policies, especially the Palestinian cause. We are standing with our Palestinian brethren on the same path of resistance and struggle,” the protesters noted.

They chanted slogans against Saudi criminal acts, and voiced their determined resistance.

Sa’ada Governor Muhammad Jaber Awad said the Yemen war is engineered by the United States as he addressed the rally, noting that Saudi Arabia, the United Arab Emirates (UAE) and their allies are just playing out Washington’s scenarios.

“Massive rallies like this are actually referendums on the approval rating of Yemeni leaders and the resistance front after more than seven years of aggression,” he said.

Awad went on to condemn the ongoing crimes of the Saudi-led aggression, the brutal siege on Yemen, closure of Yemeni ports and airports, and airstrikes against vital infrastructure.

For his part, the director of the Human Rights Office in Sa’ada, Yahya al-Khatib, stated that at least 4,339 people, including 1,265 children and 767 women, have lost their lives as a result of seven years of Saudi-led strikes on various regions in the northwestern Yemeni province.

Similar rallies were held in other Yemeni cities, including Raymah, Hajjah and Mahweet, to mark the National Day of Resilience.

Saudi Arabia launched the devastating war against Yemen in March 2015 in collaboration with a number of its allies and with arms and logistics support from the United States and several Western states.

The objective was to bring back to power the former Riyadh-backed regime and crush the popular Houthis resistance movement, which has been running state affairs in the absence of an effective government in Yemen.

The war has stopped well short of all of its goals, despite killing hundreds of thousands of Yemenis and turning the entire country into the scene of the world’s worst humanitarian crisis.