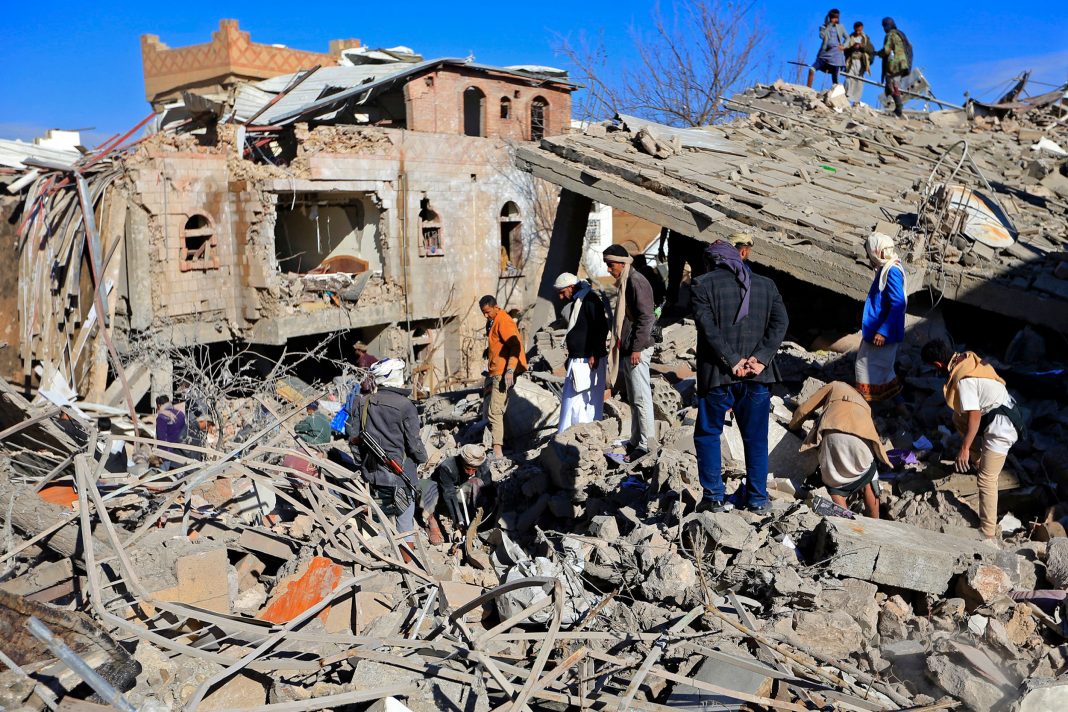 West News Wire: Due to the Saudi Arabia-led coalition intransigence in continuing to detain oil derivatives ships and prevent their entry into the port of Hodeida province, the health sector is facing difficult conditions, which has a negative impact on the services provided to patients and puts their lives in jeopardy.

Yemen’s seven-year-old war saw a significant escalation in January, resulting in additional bloodshed and misery for the country’s people.

Over North Yemen, the Saudi Arabian Air Force conducts a considerable number of air raids. The raids killed more civilians than military combatants, as they had in the past. The attack killed around 100 individuals, including women and children, according to the Red Cross. More than 200 people were critically injured in the incident, according to Medecins Sans Frontieres (MSF/Doctors Without Borders).

Another Saudi air assault on Hodeida’s port city hit a crucial telecommunications center, knocking out Internet connectivity for the majority of Yemen for weeks. There were also a number of civilians killed. At least three children were murdered in the Hodeida attack, according to Save the Children.

“Migrants seeking better life for themselves and their families, Yemeni children and civilians maimed by the hundreds, is an image we never hoped to wake up to in Yemen,” a representative for the Fund said. The air assaults spearheaded by Saudi Arabia were criticized by UN Secretary-General Antonio Guterres. He demanded that the event be investigated “quickly, effectively, and transparently.”

The new Saudi-led air attacks have been dubbed “an American escalation” by the Houthis. The majority of Yemenis feel that the war and the devastation it has inflicted are directly related to the United States’ support for Saudi Arabia’s military effort. The air raids, according to Jamal Benomar, a former United Nations special envoy to Yemen, are the latest in a series of war crimes committed by the military coalition led by Saudi Arabia.

“There has been no accountability since the beginning of the war,” he claimed. It is a failure on the part of not only the United States, but also the permanent members of the Security Council. Instead of cooperating to find a method to push the Saudis to halt the war and the Yemeni parties to enter the political process in good faith to end the conflict, the reality is that all five members have been competing for lucrative contracts from Saudi Arabia and the UAE.”

Yemen’s condition is being labeled as the world’s biggest humanitarian tragedy in recent memory.

Yemeni people “are not starving, they are being starved,” according to the humanitarian organization Oxfam. In the first three years of the conflict, at least 85,000 children under the age of five perished of malnutrition, according to the Save the Children Fund. Yemen also has the highest COVID-19 death rate (29%) in the world, which is five times higher than the global norm. The war has wreaked havoc on the country’s health care system. Yemen was already one of the poorest countries on the planet before the war broke out.

The fight began in the final years of Barack Obama’s presidency. From the start, the United States and its major European allies backed Saudi Arabia’s military operation in Yemen.

The Saudi-led coalition established an air, land, and sea embargo on Yemen with Washington’s permission, severely restricting the supply of food, medicine, gasoline, and other necessary items into the nation. Ships with United Nations-approved rescue supplies have had to wait months for authorization from the Saudis. The main airport in Sana, the capital, has been denied permission to open to commercial flights. The Saudi-led siege has been described as “an offensive military campaign that murders civilians” by Bruce Riedel of the Brookings Institute, a renowned American think tank.

Since late 2021, the Saudi-led alliance has upped the scale of its air raids in an effort to block the Houthi forces’ push towards the oil-rich Marib governorate.

According to the humanitarian charity Oxfam, Yemenis “are not starving, they are being starved.” According to the Save the Children Fund, at least 85,000 children under the age of five died of hunger in the first three years of the conflict. Yemen also has the world’s highest COVID-19 death rate (29 percent), which is five times the worldwide average. The war has wrecked havoc on the health-care system in the country. Before the war, Yemen was already one of the poorest countries on the planet.

The battle began during Barack Obama’s final years in office. The US and its major European allies have backed Saudi Arabia’s military intervention in Yemen from the start.

The Emiratis have their own agenda in the region and have been propping up a secessionist movement that wants South Yemen to once again become an independent entity. North and the South Yemen became one country only in 1990. The UAE military has taken control of Socotra Island. It is nominally administered by the Southern Transitional Council formed by southern secessionists. The island, famous for its biodiversity, is strategically located near major shipping routes connecting the Red Sea, the Gulf of Aden and East Africa.

The UAE is also in de facto control of many ports in the south of Yemen. Though the UAE officially withdrew its military contingent from Yemen in 2019, it continues to back militias, many of whom have a separatist agenda. According to reports, around 90,000 fighters are armed, trained and financed by the UAE. Said Farea al-Muslimi, a non-resident fellow at the policy institute Chatham House: “The UAE has surprised everyone, even themselves, on how well they have done militarily in Yemen. They have almost had a free rein as a result to control and have presence in whatever they want in the country, including Yemen’s ports, which is a prize for them.”

On the campaign trail, president Biden had promised to bring an end to the war. After taking office in January 2021, Biden said that ending the war was one of his priorities. He announced the curtailing of military aid to Saudi Arabia and the UAE, stating that only “defensive weaponry” would be sold to them. Biden had also said at the time that he wanted to “reset” relations with Saudi Arabia and that he would end “all American support for offensive operations in the war in Yemen, including relevant weapons sales”.

After seven years of fierce civil strife and foreign military intervention, the US dropped the terror designation only last year to make life a little easier for the common Yemeni. The removal of the Saudi blockade, which prohibits food and medical help from entering Yemen, is the major Houthi prerequisite for initiating peace negotiations. The addition of the Houthi-led government in Sana to the State Department’s terror list would exacerbate the country’s already dire humanitarian situation.