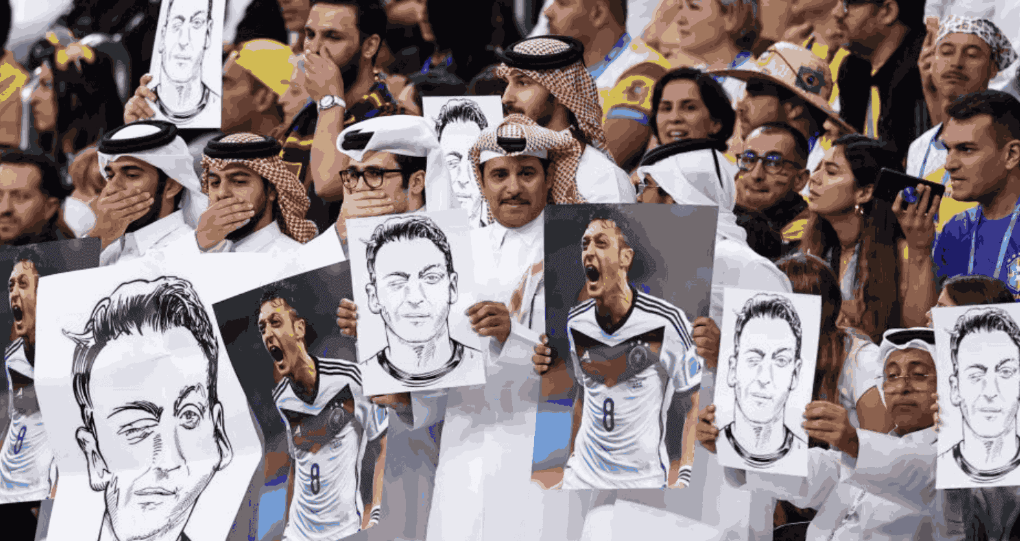 West News Wire: By carrying images of former German team member Mesut Ozil, who was the object of racial abuse in his native Germany, football supporters in Qatar have looked to respond to the German team’s World Cup protest against the ban on “One Love” armbands.

At the Spain vs. Germany game on Sunday, a group of supporters held prints of hand-drawn sketches of Ozil and images of him playing for Germany while covering their lips.

Ozil, a descendant of Turkish immigrants who was born in Germany, accused the German football association, its supporters, and the media of racism in their treatment of those with Turkish ancestry.

When Ozil left the German national team, he declared, “I am an immigrant when we lose, but I am German when we win.”

Ozil was considered one of the greatest midfielders of his generation and his surprise retirement from the German team in 2018 caused shockwaves.

“It is with a heavy heart and after much consideration that because of recent events, I will no longer be playing for Germany at international level whilst I have this feeling of racism and disrespect,” he wrote on Twitter at the time.

“I used to wear the German shirt with such pride and excitement, but now I don’t.  Racism should never, ever be accepted.”

Ozil also cited statements from German politicians, racist taunts from fans and hate mail as examples of the hostile climate he and his family faced leading up to his decision.

The abuse started before the 2018 World Cup when Ozil and Germany teammate Ilkay Gundogan posed for photographs with Turkish President Recep Tayyip Erdogan. Gundogan also has a Turkish family background. He was subsequently jeered by German supporters during a World Cup warmup game.

The abuse of Ozil, in particular, increased after the tournament, helped by incendiary statements from Germany team manager Oliver Bierhoff and the federation president at the time, Reinhard Grindel.Grindel later said he should have given Ozil more support.

After playing in Sunday’s game at Al Bayt Stadium, in which Germany and Spain drew 1-1, Gundogan said he just wanted to focus on football from now on.

“Honestly, my point of view is: now the politics are finished,” Gundogan said.

“The country of Qatar is very proud to host the World Cup, also the first Muslim country, and I come from a Muslim family. So the Muslim community is proud. So I think now it’s just about football.”