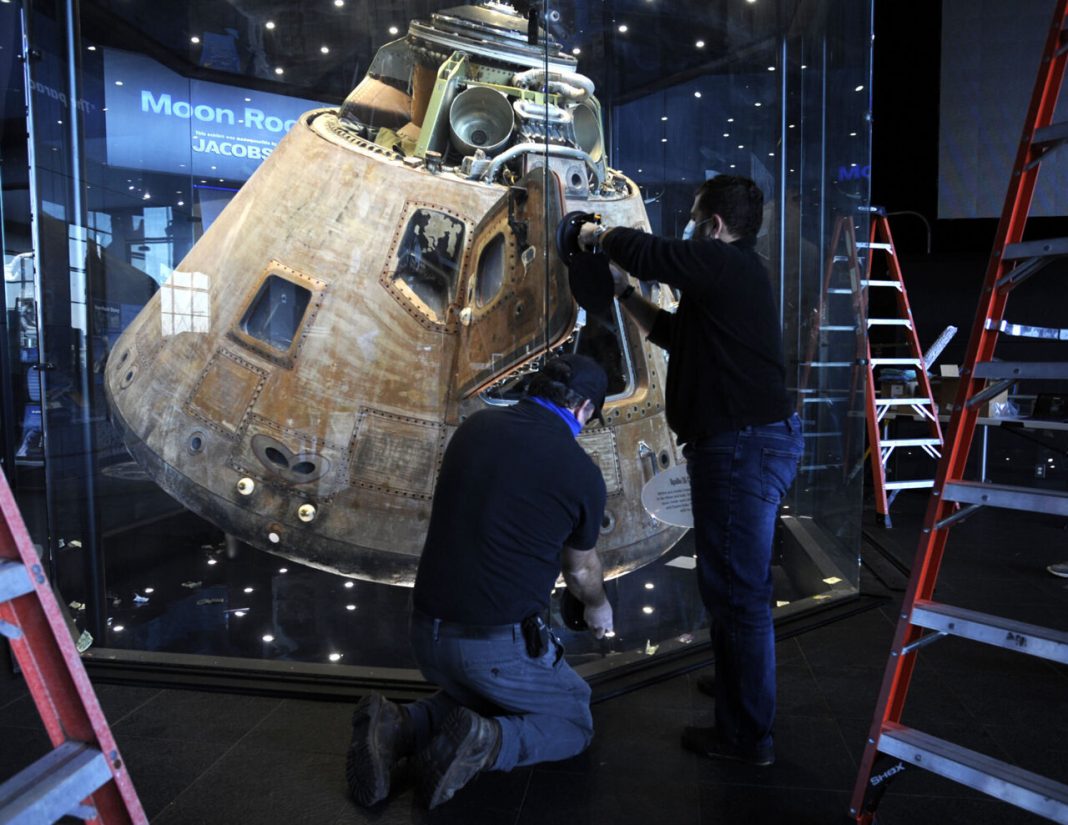 West News Wire: After carrying three astronauts to the moon for three decades, the Apollo 16 capsule has become dusty. The spacecraft is covered in cobwebs. The floor of the huge case that safeguards the space relic in a museum is littered with business cards, a pencil, money, a spoon, and even a container of lip balm.

Because of the COVID-19 outbreak, the cleaning of the ship’s display at the US Space and Rocket Center, which is near NASA’s Marshall Space Flight Center, was disrupted. However, workers are preparing the spacecraft for the 50th anniversary of its launch in April 1972.

Delicately using microfiber towels, extension poles, brushes, dust-catching wands and vacuums, a crew recently cleaned the 6.5-ton, nearly 11-foot-tall capsule and wiped down its glass enclosure, located beneath a massive Saturn V rocket suspended from the ceiling. They removed dozens of items that people had stuck through cracks in the case.

Aside from overseeing the cleaning, consulting curator Ed Stewart taught museum staff how to maintain the capsule, which is on loan from the Smithsonian Institution and has been displayed in the “rocket city” of Huntsville since the 1970s.

Brushing dust off the side of the capsule while dressed in protective clothing, Stewart said the command module was in “pretty good shape” considering its age and how long it had been since the last cleaning about three years ago.

“I’m pleased to see that there’s not heavy layers of dust. I’ve not seen a lot of insect debris or anything like that, so I take that as a very positive sign,” he said.

Richard Hoover, a retired NASA astrobiologist who serves as a docent at the museum, remembered a time decades ago when visitors could touch the spacecraft. Some even picked off pieces of the charred heat shield that protected the ship from burning up while reentering Earth’s atmosphere, he said.

“This is really quite a travesty because they don’t realize that this is a tremendously important piece of space history,” he said.

Conservation procedures changed as preservationists realized that a ship built to withstand the rigors of space travel didn’t hold up well under the constant touch of tourists, Stewart said. That’s why the case surrounding the capsule is sealed.

“Making it last for 1,000 years was not on the engineer’s list of requirements for developing these to get the astronauts to the moon and back safely,” he said.

Perched atop columns, the capsule  nicknamed “Casper” during the flight  is tilted so visitors can look inside the open hatch and see controls and the metal-framed seats where astronauts Ken Mattingly, John Young and Charlie Duke rode to the moon and back.

Duke, who walked on the moon with Young while Mattingly piloted the capsule, is expected to attend a celebration this spring marking the 50th anniversary of the flight’s liftoff on April 16, 1972.

The capsule was cleaned and any potentially hazardous materials were removed after the flight, but reminders of its trip to the moon remain inside. Leaning through the hatch to check for dust, Stewart pointed to a few dark spots over his head.

He explained, “That’s the crew’s fingerprints and handprints on there.”

Workers aim to further seal the capsule’s cover to prevent visitors from depositing anything inside, although they are taking care not to damage Apollo 16. While scrubbing the spaceship with elbow grease would be simple, Stewart believes that doing so would damage the patina that connects it to history.

“You don’t want to lose anything because it’s all part of the mission’s tale.” It’s gone if you clean it. “It’s that extra layer of history that just fades away if you make a mistake,” he explained.