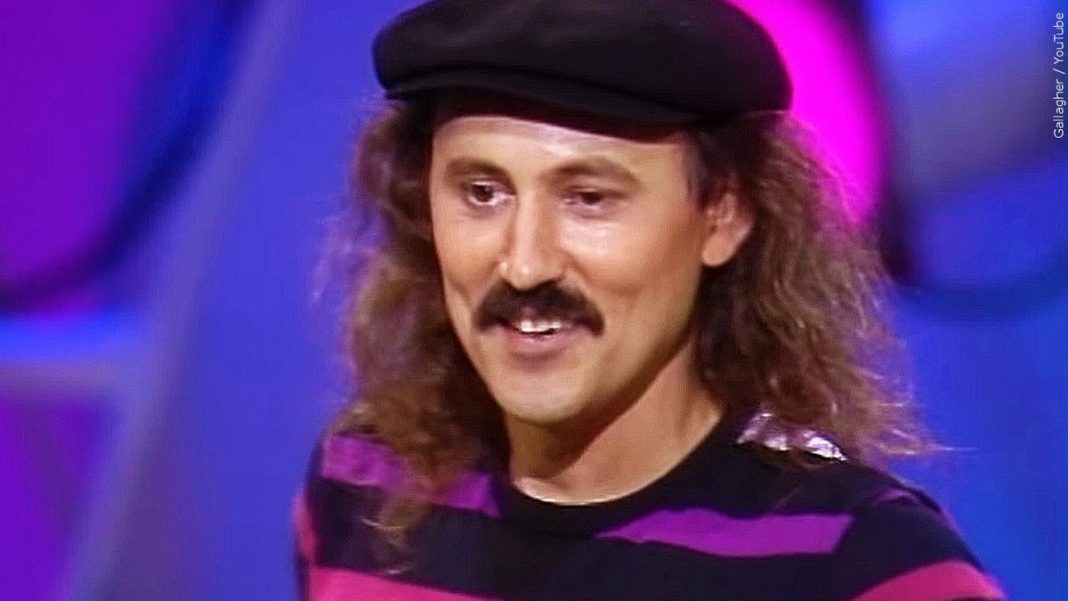 West News Wire: A path of laughter, rage, and shattered watermelons were left in the wake of the long-haired, smash-’em-up comedian Gallagher’s death at age 76.

In a statement, Craig Marquardo, who identified himself as Gallagher’s “longtime former manager,” claimed that the musician passed away on Friday at his Palm Springs, California, home following a brief illness. Over the years, Gallagher suffered many heart attacks, including one in 2012, just before a concert in Texas.

With a beret on his head and a few simple props, from a can of oil to a bull whip, the man born Leo Anthony Gallagher Jr. built a nationwide following in the 1970s and ’80s, appearing on the “Tonight” show with Johnny Carson and starring in numerous Showtime specials. His act included observational humor (“What about Easter? Whose idea was it to give eggs to an animal that hops”), political commentary (“They don’t call a tax a tax. They call it a revenue enhancer”), invented sports (synchronized Ping-Pong) and his trademark Sledge-O-Matic destruction.

“Ladies and gentlemen! I did not come here tonight just to make you laugh. I came here to sell you something, and I want you to pay particular attention!” he would call out in his best rapid-fire impersonation of a late-night television pitchman. “The amazing Master Tool Corporation, a subsidiary of Fly-By-Night Industries, has entrusted who? Me! To show you! The handiest and the dandiest kitchen tool you’ve ever seen.”

Sledgehammer in hand, he would then apply his full muscle to apples, grapes, lettuce and other produce, most famously the inevitable watermelon, with audience members in front showered in food bits.

Gallagher was a Fort Bragg, North Carolina, native who started out in 1960 as road manager for the comedian/musician Jim Stafford and soon began performing himself, honing his act at the Comedy Store and other clubs. He was not the only funnyman in the family: His younger brother Ron became a comedian, received Leo’s initial blessing and looked and acted enough like his better-known sibling that some audiences were unsure who they had come to see. Leo Gallagher eventually secured a court injunction barring his brother from using his routines.

The elder Gallagher became increasingly controversial in recent years, chastised for racist and homophobic remarks. Gallagher even cut short an interview in 2011 with Marc Maron after the WTF podcast host confronted him about his statements.

“I’m the problem?!” Gallagher said at one point. “Do you think when I’m dead, gays will finally have an opportunity in America? Have I really been holding them down?”

In 2003, Gallagher was among more than 100 candidates running in the recall election for California governor, won by Arnold Schwarzenegger. Over the past decade, Gallagher appeared in a Geico commercial and in the movie “The Book Of Daniel.”