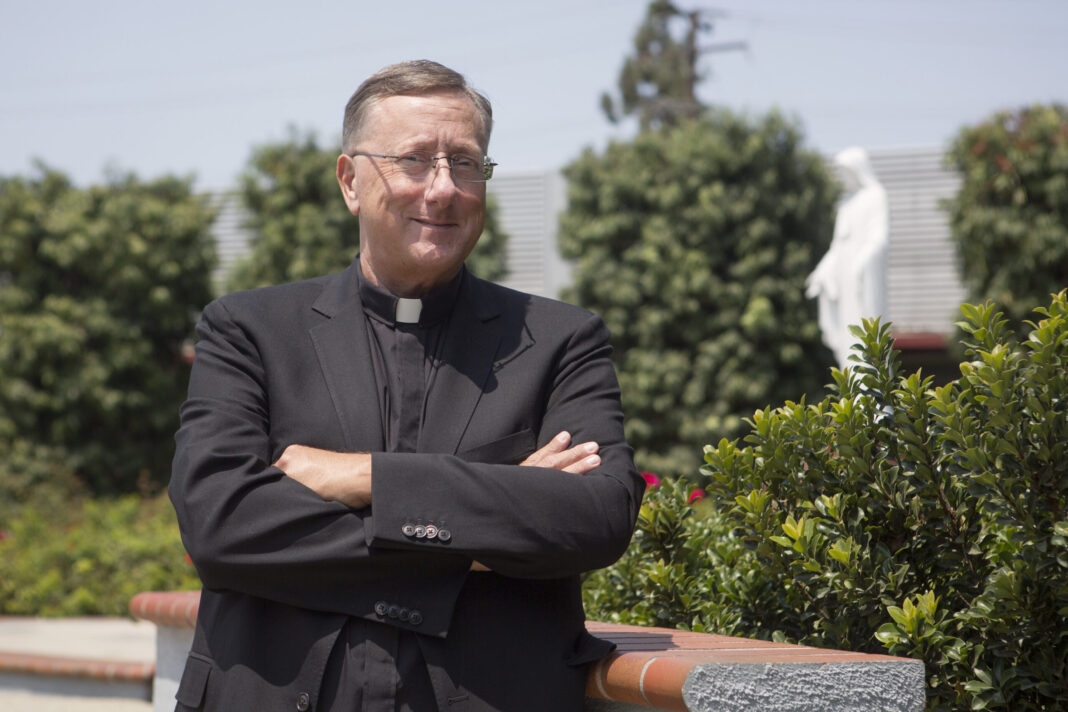 Jenkins’ retirement comes just days before a Sacramento law firm is set to begin questioning Mater Dei students and employees as part of an inquiry into the Monarch football and athletic programs’ culture. Jenkins ordered the probe in November in response to a series of Orange County Register allegations alleging three Monarch football players assaulted a teammate and a classmate.

Even as Mater Dei swept to a national title, the Register reports drew national attention, prompting calls for Rollinson and Mater Dei principal Frances Clare to be fired.

Jenkins’ departure was announced Saturday in a letter to the Mater Dei community by Erin C.O. Barisano, Diocese of Orange superintendent of schools.

Barisano said Jenkins has returned to Holy Cross order in South Bend, Indiana where he will “take on a new assignment.”

“As Superintendent Barisano noted in her letter to the Mater Dei family, Father Jenkins has been called back to his Order,” Mater Dei said in a statement. “There is no connection between the litigation and his departure from the school and to make such a connection is deeply unfair to Father Jenkins who served Mater Dei well during his tenure.”

Jenkins took over as Mater Dei’s top administrator in July. He had previously served as president of Holy Cross High School in Queens, N.Y.

Jenkins was hired in February, replacing Patrick Murphy, who resigned in January 2020 to join the NHL’s Arizona Coyotes. Murphy had served as president since 2002. Jenkins formally took over at Mater Dei on July 1. Jenkins had been on sabbatical from the Holy Cross order to take the Mater Dei position.

But less than six months later he found himself embroiled in a controversy that raised questions about the culture within one of the nation’s premier high school football programs and the largest coed Roman Catholic high school west of the Mississippi River.

Jenkins on November 30 said Mater Dei would commission an investigation into the safety practices of its athletic programs by a law firm. Jenkins also announced that he was also creating a task force to review “how athletics is engaged.”

The investigation will proceed as scheduled, a Mater Dei spokesperson said.

“Clearly sports are an important part of any high school experience, but they are not the sole mission of Mater Dei.” Jenkins wrote in a letter to Mater Dei parents and students at the time. “We must ensure balance.”

A Sacramento law firm hired by Mater Dei met with officials this week to map out an investigation into alleged misconduct and the culture within the school’s football and athletic programs. The discussions included agreeing on a timeline for the investigation and the different phases of the probe. The firm will start interviewing Mater Dei students Thursday, according to a school official.

Tension between Jenkins and Rollinson and his supporters was evident amid the post-game celebration following Mater Dei’s 44-7 victory against Serra in the CIF State championship game last month. A smiling Jenkins approached Rollinson’s family to congratulate them but was rebuffed by Rollinson’s wife. Jenkins and Clare were later involved in a heated discussion on the field as Mater Dei players, coaches and fans looked on.

“It looked like you and Clare were having a heated conversation,” Jenkins was asked as he left the stadium.

Jenkins replied, “We’ve had a lot of those these days.”

A Register report in November detailed how a current Mater Dei football player punched a teammate, 50 pounds lighter than him, three times in the face during an alleged hazing ritual called “Bodies” on Feb. 4 while other Monarchs players shouted racial epithets at the smaller player, according to two videos of the altercation obtained by the Register.

The Santa Ana Police Department recommended the larger player be prosecuted for felony battery, according to a police report. The Orange County District Attorney’s Office does not intend to file charges in the case. Orange County District Attorney Todd Spitzer said last week the altercation does not meet the legal standards for criminal “hazing” or felony assault, but he is willing to consider additional evidence.

“If I had a hundred dollars for every time these kids played Bodies or Slappies, I’d be a millionaire,” Rollinson told the injured player’s father the day after the altercation, according to a court filing.

Mater Dei officials initially declined to cooperate with Santa Ana Police Department investigators, according to police reports. Rollinson and Kevin Kiernan, the school’s athletic director, finally agreed to be interviewed by a Santa Ana Police Department investigator with Mater Dei assistant principal for student services Miguel Gutierrez present on April 21, more than two months after the altercation and when the Santa Ana PD first requested information from the school, according to police reports.

Rollinson during the police interview denied hazing existed in the Mater Dei program. He added that the interview was the first time he had heard of the Bodies game.

The Register also reported that Chase Hall, a Mater Dei basketball player, allegedly was attacked and beaten by two Mater Dei football players as he left a gathering in Irvine shortly after midnight on May 5, 2019, according to police reports.

Hall’s jaw was broken during the altercation and he will require additional surgery.

“I’ll never forget what the surgeon said,” Mary Hall, Chase’s mother told the Register while discussing the punch that broke her son’s jaw. “He said if it had been a quarter-inch higher.

“He would be dead.” The two Mater Dei athletes, along with a classmate who authorities claim planned the attack, should be prosecuted with aggravated violence and criminal conspiracy, according to an Irvine Police Department investigation. According to Mary Hall, the two players were placed on probation.

The Hall family filed a lawsuit in Orange County Superior Court on May 5 alleging assault, battery, negligence, civil conspiracy, intentional infliction of emotional distress, negligent infliction of emotional distress, and false imprisonment against an All-County linebacker for Mater Dei (Player 1), a senior Monarch lineman who had received a scholarship offer to play at a Pac-12 school (Player 2), and a classmate. The case is still pending in the courtroom.