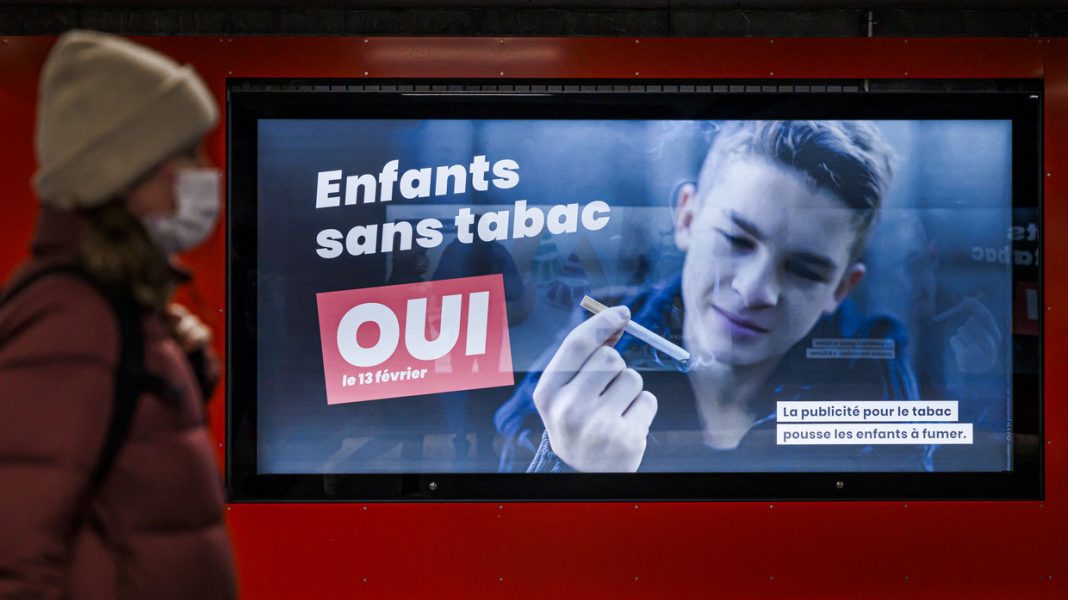 West News Wire: The Swiss decided on Sunday to tighten their notoriously liberal tobacco rules by banning virtually all tobacco advertising, with roughly 57 percent of voters supporting the near-total ban and 16 of Switzerland’s 26 cantons supporting it, according to final figures.

“We are very pleased. “The people realized that their health was more essential than their economic interests,” Stefanie De Borba of the Swiss League Against Cancer told AFP.

Switzerland lags well behind most rich countries in terms of cigarette , a position that has been attributed to heavy lobbying by some of the world’s largest tobacco corporations with offices in the country.

Except on television and radio, and when particularly targeting kids, most tobacco advertising is currently permitted on a nationwide level.

Some Swiss cantons have introduced stricter regional legislation and a new national law is pending, but the campaigners who forced the issue to a vote under Switzerland’s direct democracy system demanded far tighter rules.

Opponents of the initiative, which include the Swiss government and parliament, argued that it goes too far.

“Today we are talking about cigarettes, but we will soon be talking about alcohol and meat,” warned Philippe Bauer, a parliamentarian with the right-wing Liberal Party

His concerns echo those voiced by Philip Morris International (PMI), the world’s largest tobacco company, which, like British American Tobacco and Japan Tobacco, has headquarters in Switzerland and has helped fund the “No” campaign.

“There is no other consumer product that kills half of all users.”

Campaigners say lax advertising laws have stymied efforts to bring down smoking rates in the Alpine nation of 8.6 million people, where more than a quarter of adults consume tobacco products. There are about 9,500 tobacco-linked deaths each year.

The tobacco industry contributes about six billion Swiss francs ($6.5 billion) to the economy annually one percent of Switzerland’s gross domestic product and accounts for some 11,500 jobs.

Swiss health minister Alain Berset meanwhile stressed to journalists that it could take time for the near-ban to take effect.

“It really does not seem possible that it could take effect this year,” he said.

The new tobacco advertising restrictions could conceivably be added to a new tobacco law already due to take effect next year, and which for the first time will set a nationwide minimum age for the purchase of tobacco products.

Other issues on Sunday’s ballot did not fare as well in the polls.

Nearly 80 percent of voters rejected a call to ban all animal testing.

All political parties, parliament and the government had opposed the initiative, arguing it went too far and would have dire consequences for medical research.

In another animal-themed vote, inhabitants in the northern Basel-Stadt canton also hugely rejected a bid to afford non-human primates some of the same basic fundamental rights as their human cousins, with nearly 75 percent opposed.

More than 55 percent of voters also rejected a plan by the national government to provide additional state funding to media companies, which have seen their advertising revenues evaporate in recent years.

Nearly 44 percent of eligible Swiss voters took part on Sunday, which is not unusually low in a country where such popular votes are held every few months.