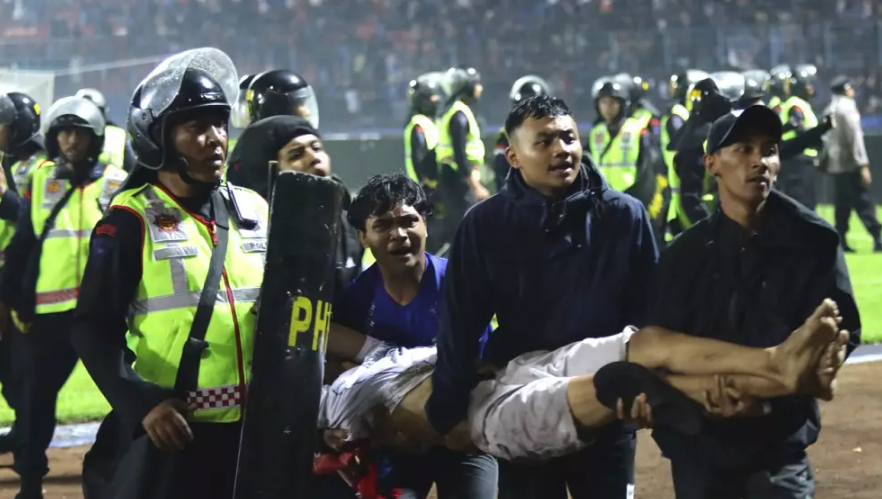 West News Wire: At least 174 people have died and numerous others have been hurt in a brawl and a stampede at a football stadium in Indonesia.

One of the deadliest sporting stadium accidents in the history of the world occurred on Saturday night in the eastern city of Malang.

After Arema FC’s team lost to Persebaya Surabaya 3-2, thousands of their supporters reportedly flooded the field at Kanjuruhan Stadium, according to police in the East Java region. Police used tear gas in an attempt to quell the “riots,” which caused a stampede as terrified spectators raced for an exit gate.

Others died after being crushed while others suffocated in the commotion. Two police officers were among the at least 34 persons who passed away at the stadium.

East Java’s Vice Governor Emil Dardak told Kompas TV in an interview on Sunday afternoon that the death toll has climbed to 174, while more than 100 injured people were receiving intensive treatment in eight hospitals. Eleven of them were in critical condition, he said.

A hospital director told local television that one of the victims was five years old.

Video footage from local news channels showed fans streaming onto the pitch in the Kanjurujan Stadium in Malang after Arema FC lost to Persebaya Surabaya. Scuffles can be seen, with what appeared to be tear gas in the air. Images also showed people who appeared to have lost consciousness being carried away by other fans.

The stadium holds 42,000 people and authorities said it was a sell-out. Police said about 3,000 people had stormed the pitch. Vehicles outside the stadium were also torched, including at least five police vehicles.

Survivors described panicking spectators in a packed crowd as tear gas rained down on them.

“Officers fired tear gas, and automatically people were rushing to come out, pushing each other and it caused many victims,” a 43-year-old spectator told the AFP news agency. “Nothing was happening, there was no riot. I don’t know what the issue was, they suddenly fired tear gas. That’s what shocked me, didn’t they think about kids, women?”

President Joko Widodo ordered an investigation into the tragedy, a safety review into all football matches and directed the country’s football association to suspend all matches until “security improvements” were completed.

“I deeply regret this tragedy and I hope this football tragedy will be the last in our country,” Widodo said.

Fan violence is an enduring problem in Indonesia, with a strong rivalry between clubs sometimes leading to violence among supporters. Arema FC and Persebaya Surabaya are longtime rivals and the latter’s fans were not allowed to buy tickets for Saturday’s game due to fears of violence.

Indonesia’s coordinating minister for political, legal and security affairs, Mahfud MD, said organisers had ignored authorities’ recommendation to hold the match in the afternoon instead of the evening. He also said the government had recommended only 38,000 tickets be printed, but there was instead a sell-out crowd of 42,000. “The government has made improvements to the implementation of football matches and will continue to improve. But this sport, which is a favourite of the wider community, often provokes supporters to express emotions suddenly,” he said in an Instagram post.