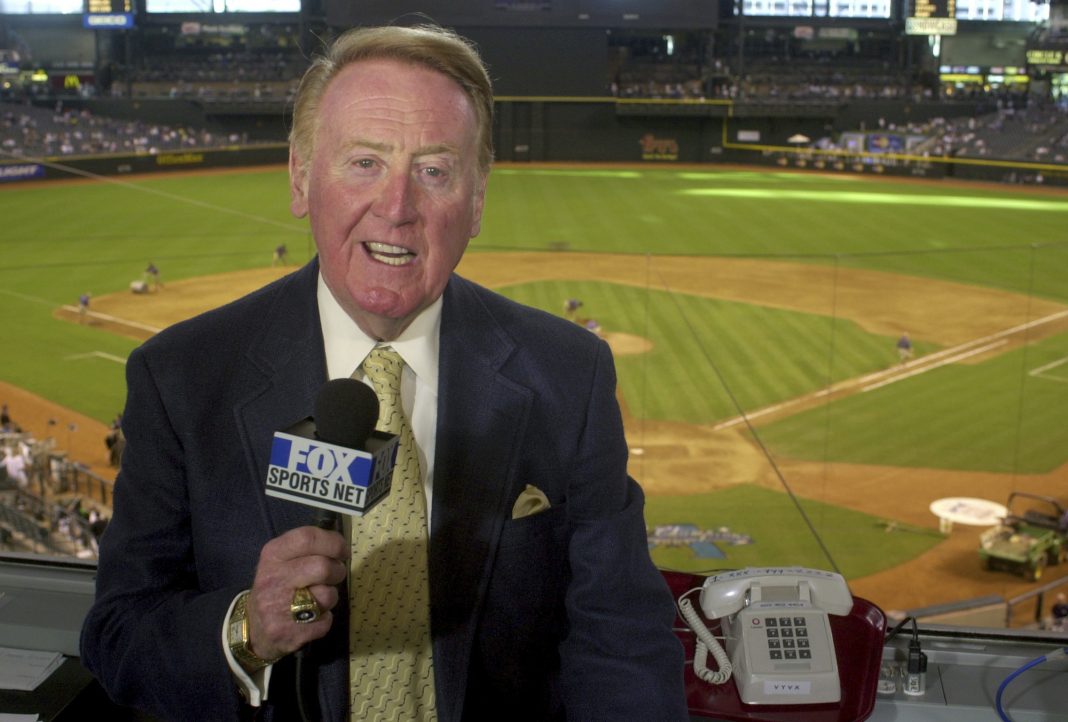 West News Wire: Hall of Fame broadcaster Vin Scully passed away on Tuesday night. For 67 years, he delighted and informed Dodgers fans in Brooklyn and Los Angeles with his dulcet tones, providing the soundtrack of summer. He was 94.

The crew was notified by family members that Scully passed away at his home in the Hidden Hills district of Los Angeles. The reason of death was not disclosed.

After the Dodgers’ game in San Francisco, pitcher Clayton Kershaw remarked, “He was the best there ever was.” Simply a special individual. I’m happy and appreciative that I was able to get to know him so well.

As the sports broadcaster with the single-team record for the longest tenure, Scully called it all and witnessed it all. He began in the 1950s era of Pee Wee Reese and Jackie Robinson, on to the 1960s with Don Drysdale and Sandy Koufax, into the 1970s with Steve Garvey and Don Sutton, and through the 1980s with Orel Hershiser and Fernando Valenzuela. In the 1990s, it was Mike Piazza and Hideo Nomo, followed by Kershaw, Manny Ramirez and Yasiel Puig in the 21st century.

“You gave me my Wild Horse name. You gave me love. You hugged me like a father,” tweeted Puig, the talented Cuban-born outfielder who burned brightly upon his Dodgers debut in 2013. “I will never forget you, my heart is broken.”

The Dodgers changed players, managers, executives, owners and even coasts but Scully and his soothing, insightful style remained a constant for the fans.

He opened broadcasts with the familiar greeting, “Hi, everybody, and a very pleasant good evening to you wherever you may be.”

Ever gracious both in person and on the air, Scully considered himself merely a conduit between the game and the fans.

After the Dodgers’ 9-5 win, the Giants posted a Scully tribute on the videoboard.

“There’s not a better storyteller and I think everyone considers him family,” Dodgers manager Dave Roberts said. “He was in our living rooms for many generations. He lived a fantastic life, a legacy that will live on forever.”

Although he was paid by the Dodgers, Scully was unafraid to criticize a bad play or a manager’s decision, or praise an opponent while spinning stories against a backdrop of routine plays and noteworthy achievements. He always said he wanted to see things with his eyes, not his heart.

“We have lost an icon,” team president and CEO Stan Kasten said. “His voice will always be heard and etched in all of our minds forever.”

Vincent Edward Scully was born Nov. 29, 1927, in the Bronx. He was the son of a silk salesman who died of pneumonia when Scully was 7. His mother moved the family to Brooklyn, where the red-haired, blue-eyed Scully grew up playing stickball in the streets.

As a child, Scully would grab a pillow, put it under the family’s four-legged radio and lay his head directly under the speaker to hear whatever college football game was on the air. With a snack of saltine crackers and a glass of milk nearby, the boy was transfixed by the crowd’s roar that raised goosebumps. He thought he’d like to call the action himself.

Scully, who played outfield for two years on the Fordham University baseball team, began his career by working baseball, football and basketball games for the university’s radio station.

In 2020, Scully auctioned off years of his personal memorabilia, which raised over $2 million. A portion of it was donated to UCLA for ALS research.

He was preceded in death by his second wife, Sandra. She died of complications of ALS at age 76 in 2021. The couple, who were married 47 years, had daughter Catherine together.