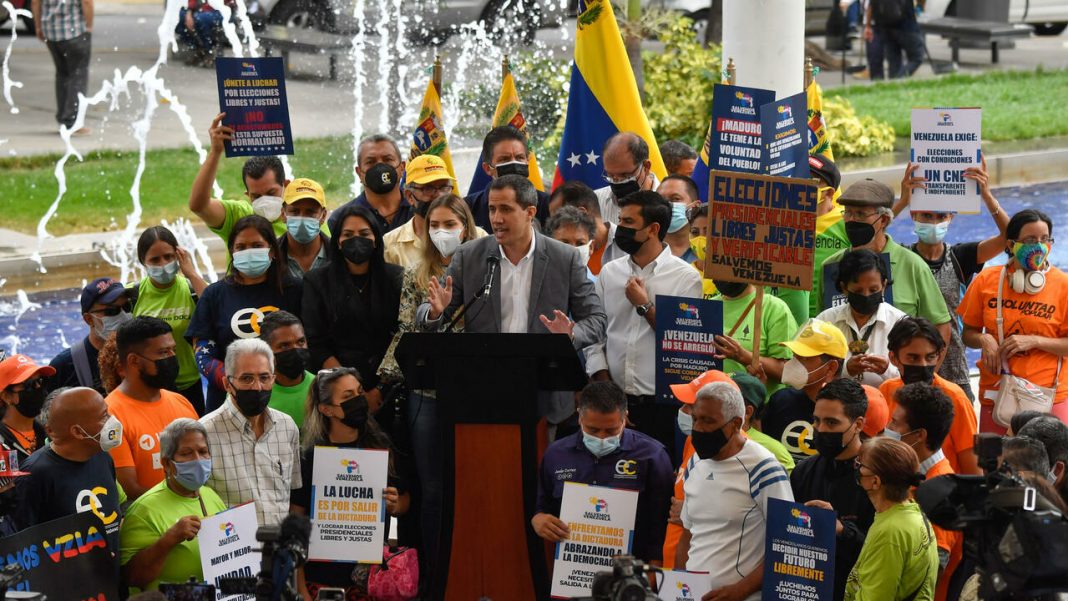 West News Wire: The US-backed Venezuelan opposition faction stated Monday that a primary poll will be held next year to select a presidential candidate for the 2024 election.

In a statement, the Unitary Platform said it has restructured into a “wide and inclusive” organization with clear rules and concrete work areas.

“We will begin a detailed engagement process with the entire country as of now now in order to jointly construct this powerful mechanism for the choosing of the sole candidate,” it said.

The announcement comes after a recent conference in Central America between opposition representatives and US officials to seek a way ahead for the Unitary Platform, which has been stuck in negotiations with President Nicolás Maduro’s administration.

The talks were suspended in October after the extradition to the U.S. of a key Maduro ally on money laundering charges. Maduro at the time conditioned his return to the negotiating table on the release from custody of businessman Alex Saab, who was extradited from the African nation of Cape Verde.

The negotiations, aimed at resolving Venezuela’s longstanding political standoff, took place in Mexico City under the guidance of Norwegian diplomats.

The U.S. and other countries withdrew recognition of Maduro after accusing him of rigging his 2018 re-election as president. In his place, they recognized Juan Guaidó, who was head of the then opposition-dominated congress and remains the leader of Unitary Platform.

For the past five years, the U.S. has, with little success, tried everything from punishing oil sanctions to criminal indictments and support for clandestine coups in its campaign to remove Maduro and restore what it sees as Venezuela’s stolen democracy. But in March, U.S. officials met with Maduro in Caracas as Russia’s invasion of Ukraine upended the world order and forced Washington to rethink its national security priorities.

The March meeting also came as Venezuela’s opposition as a whole contends with apathy, disappointment and divided strategies, even after anti-Maduro candidates scored key wins during November’s regional elections, including in the state where Maduro’s mentor and predecessor, the late President Hugo Chavez, was born.

Unitary Platform on Monday also announced that it had named an executive secretary to “contribute to the harmonious development of the debate and strengthening of unity” of the faction.

“We reiterate that the united struggle has as its fundamental objective to achieve political change, understanding that it is the only true way to stop the suffering of millions of Venezuelans.”