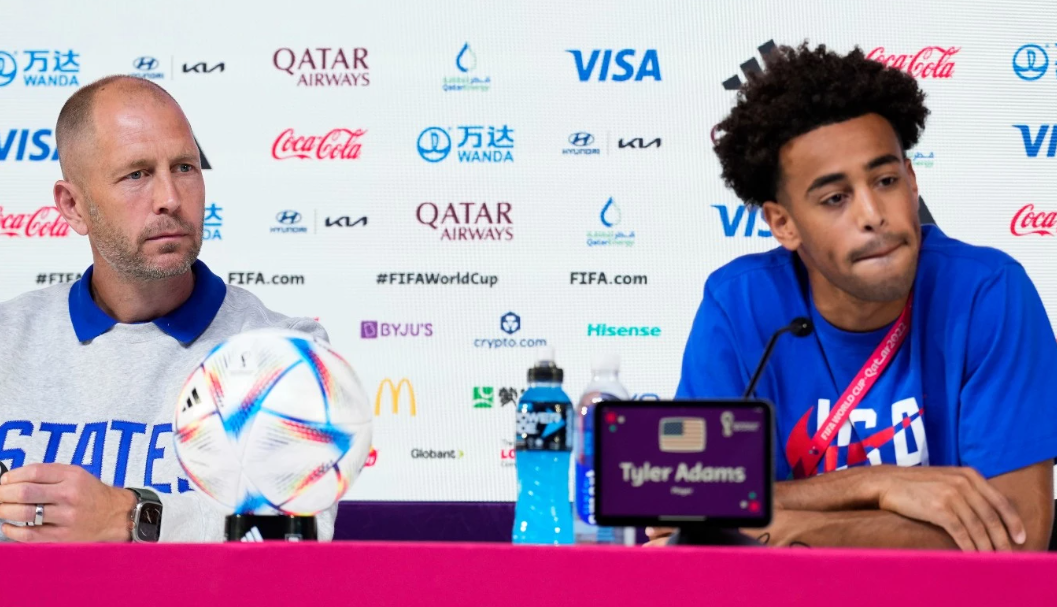 West News Wire: Tyler Adams, the captain of the US football team, was criticized by a journalist from Iran for pronouncing it incorrectly during a press conference outside of the 2022 World Cup in Doha.

One day before the crucial World Cup match between the two nations on Tuesday night, Adams and US football head coach Gregg Berhalter were subjected to a barrage of questions from Iranian journalists, including inquiries about the discrimination faced by African-Americans in the US, their nation’s skyrocketing inflation, and the US military’s meddling in the Persian Gulf.

After Iranian reporter Milad Javanmardy corrected Adams’ pronunciation of Iran and inquired about the pervasive prejudice in his native country, Adams apologized.

“You say you support the Iranian people, but you’re pronouncing our country’s name wrong. Our country is named eee-ron, not i-ran. Once and for all let’s get this clear,” said Iranian journalist.

“Second of all,” he hastened to add, “are you OK to be representing a country that has so much discrimination against Black people in his own borders? We saw the Black Lives Matter movement over the past few years; are you okay to be representing the US, meanwhile, there’s so much discrimination happening against Black people in America?”

Adams, whose mother is a White American but whose biological father is African-American, quickly took a defensive stance and tendered an apology.

“My apologies on the mispronunciation of your country. That being said, there’s discrimination everywhere you go in the US we’re continuing to make progress every single day as long as you make progress that’s the most important thing,” he remarked.

Despite attempts to dodge questions posed by Iranian journalists present at the press conference the US football team members were left clearly embarrassed.

“Sport is something that should bring nations closer together and you are a sportsperson. Why is it that you should not ask your government to take away its military fleet from the Persian Gulf,” another Iranian journalist asked.

Berhalter was even asked if domestic problems in the US such as soaring inflation was detracting the team, as well as sanctions imposed on Iran that make it difficult for Iranians to visit the US, whereas Americans are welcomed into Iran.

“I don’t know enough about politics. I’m a soccer coach,” Berhalter said, clearly unprepared for the questions tossed at him. “ And I’m not well-versed on international politics, so I can’t comment on that.”

The press conference came a day before Iran takes on the US at Qatar’s Al Thumama stadium in the final group-stage game of the two sides, with both eyeing a spot in the knockout stage of the marquee football competition.

In the run-up to the decisive match, the US football federation as well as the US media engaged in mind games against Team Melli, hurting sentiments of millions of Iranian football fans by publishing the flag of Iran on the federation’s social media handles without the emblem.

It prompted Iran’s football federation to call on FIFA to penalize Team USA in line with the rules of the game and its governing body.

Iran’s federation cited a specific FIFA regulation that calls for penalties for anyone “who offends the dignity or integrity of a country, a person or group of people through contemptuous, discriminatory or derogatory words or actions (by any means whatsoever).”

“We had no idea about what US Soccer put out. The staff, the players, we had no idea,” Berhalter said at the press conference, tendering apology on behalf of his team and players.

“We’re not focused on those outside things and all we can do, on our behalf, is apologize on behalf of the players and the staff. But it’s not something that we were a part of,” he added.

After the Iran-Wales match on Friday, Klinsmann made controversial remarks about Iran on a BBC show that sparked a massive controversy.

“Yes, that’s their culture,” he said, deriding Iranian players and coach over lack of sportsmanship. “Their way of doing it, and that is why Carlos Queiroz fits really well [with] the Iranian national team.”

When asked about the US football federation’s decision to show Iran’s national flag on social media without Iran’s insignia, Iran’s head coach Carlos Queiroz said: “I still feel I can win games with those mental games.”

“I hope that the events surrounding this World Cup will serve as a lesson for all of us in the future and we learn that our goal is to provide entertainment and cheer people up for 90 minutes, “Queiroz declared.

The Western media has been relentlessly pressuring the Iranian football squad recently due to disturbances in the country that were supported by foreign governments. With their attention on the World Cup, they have resisted falling into the deadly trap.

“For us, qualifying (for the knockout phase) would be huge. We will give everything we have to achieve,” Mahdi Taremi, one of Team Melli’s all-time leading scorers was quoted as saying by the FIFA website before the World Cup, calling it the “greatest honor” to represent the country.