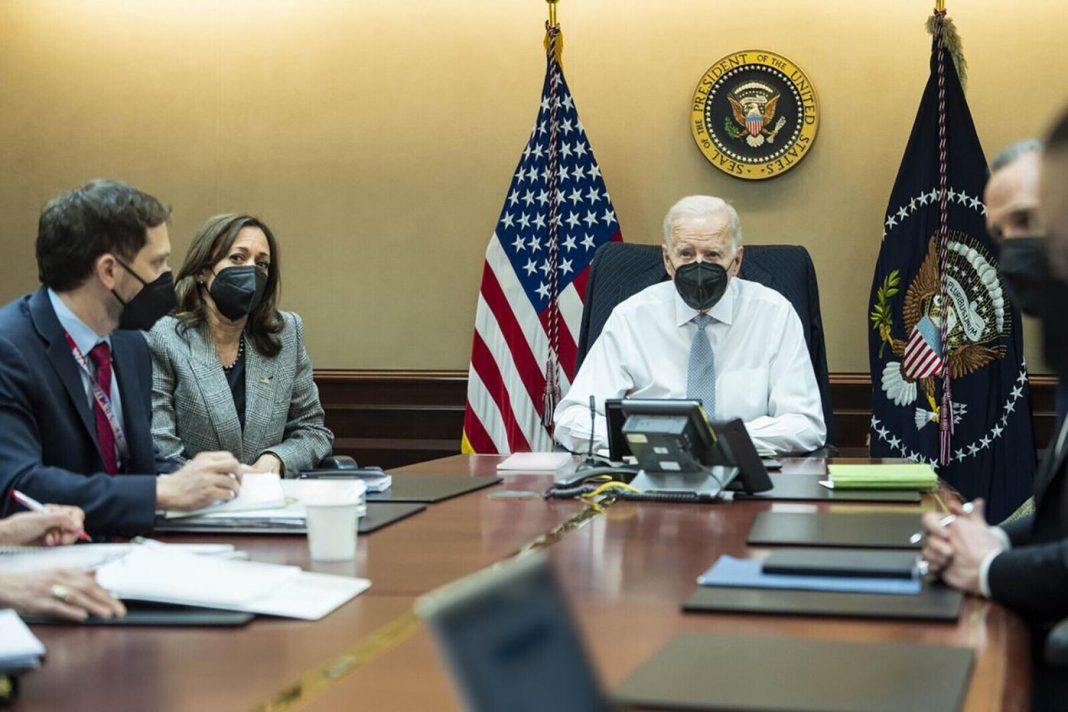 West News Wire: In remarks from the White House on Thursday, President Joe Biden detailed a dramatic US raid overnight in Syria that he said took ISIS leader “off the battlefield.”

“Last night, on my orders, US military troops successfully removed the worldwide leader of ISIS, known as Haji Abdullah, from a serious terrorist threat to the globe.” “He took over as ISIS leader in 2019 when Al Bhaghdadi was killed by a US counterterrorism operation,” Biden remarked from the Roosevelt Room. “Thanks to our troops’ valour, this heinous terrorist leader is no longer alive.”

In the wake of reports that women and children had also been killed, Biden said he had urged the Department of Defense to “take every precaution possible to minimize civilian casualties.”

“Knowing that this terrorist had chosen to surround himself with families, including children, we made a choice to pursue a Special Forces raid at a much greater risk than our to our own people rather than targeting him with an airstrike,” Biden said. “We made this choice to minimize civilian casualties.”

“We do know that as our troops approached to capture the terrorist in a final act of desperate cowardice he, with no regard to the lives of his own family or others in the building, he chose to blow himself up  not just in the vest but the blow-up that third floor, rather than face justice for the crimes he has committed, taking several members of his family with him. Just as his predecessor did,” Biden said.

Earlier in the day, the White House tweeted a photo it said showed Biden and Vice President Kamala Harris in the Situation Room watching as the raid took place.

“We remain vigilant, we remain prepared,” Biden said. “Last night’s operation took a major terrorist leader off the battlefield and it sent a strong message to terrorists around the world: We will come after you and find you.”

The Pentagon earlier had confirmed U.S. special operations forces carried out a what it called a “successful” counterterrorism mission in northwest Syria Wednesday, but provided few other details.

“U.S. Special Operations forces under the control of U.S. Central Command conducted a counterterrorism mission this evening in northwest Syria. The mission was successful. There were no U.S. casualties,” said John Kirby, the Pentagon press secretary, in a statement. “More information will be provided as it becomes available.”

One of the helicopters used in the mission experienced a mechanical problem and then had to be blown up on the ground by U.S. forces, according to a U.S. official.

No details were provided on whether the operation involved ground troops and helicopters, as was claimed in a flurry of social media reports emerging from Syria on Wednesday night.

Social media posts reported possible U.S. military activity in Idlib province, a town in far western Syria, close to the border with Turkey. Some posts included videos that seemed to show night scenes where the sounds of gunfire and low-flying helicopters could be heard near the towns of Atmeh and Dar Ballout.

The opposition-run Syrian Civil Defense, first responders also known as the White Helmets, said 13 civilians were killed as a result of the fighting and blasts that occurred at the raid site, including six children and four women.

Syrian Observatory for Human Rights, a war watchdog group based in the United Kingdom, said in a press statement that nine people, including at least two children and a woman, were killed during Wednesday’s mission. The group cited local sources.

According to an Associated Press reporter on assignment who visited the Atmeh area on Thursday and spoke with residents, the U.S. raid did involve helicopters, explosions, and machine gun fire.

The AP reporter and several residents said they saw body parts around a house targeted in the raid whose upper story was almost completely leveled leaving rubble in the surrounding olive grove.

To help the mission against ISIS, about 1,000 US military personnel are stationed in eastern Syria.

American troops do not operate in government-controlled areas of northwestern Syria, particularly in Idlib province, which has long been a refuge for extremists. They have, however, engaged out counterterrorism activities in Idlib on a periodic basis, using drone attacks to target various Islamic extremist groups.

On Oct. 27, 2019, the highest-profile mission was a ground raid that killed ISIS’ top leader, Abu Bakr al Baghdadi, who was sheltering in a house near the Turkish border.