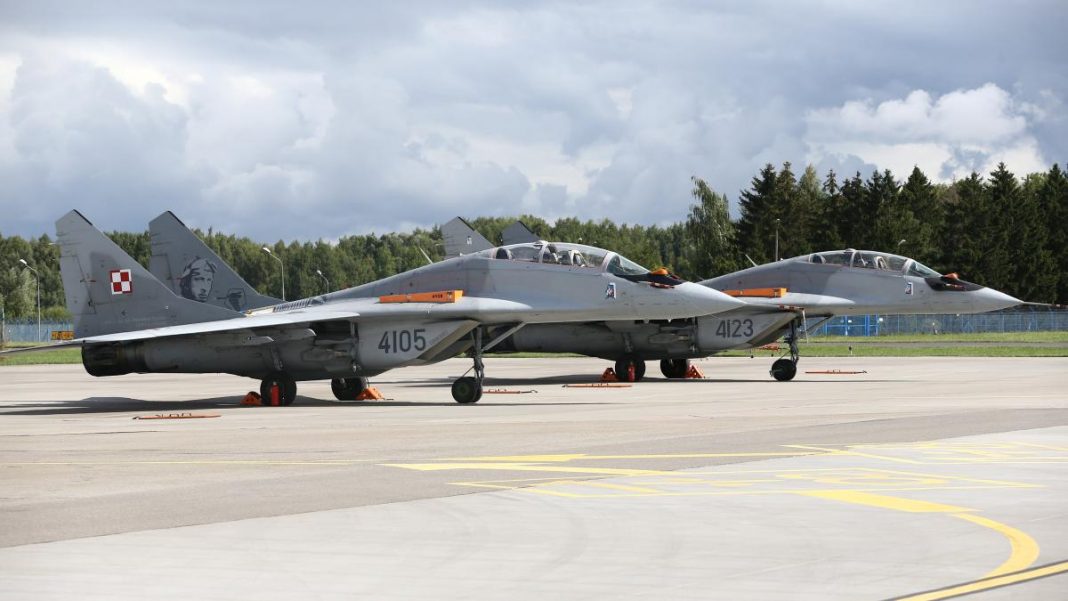 West News Wire: Poland’s offer to send MiG-29 fighter jets to Ukraine via a US airbase in Germany was rejected by the US, which said the proposal presented “severe concerns” for the whole NATO alliance.

Warsaw made the surprising offer on Tuesday in response to Ukraine’s President Volodymyr Zelenskyy’s repeated requests for more jets to help his country defend against invading Russian soldiers.

The Russian-made MiG-29 fighter jets would be sent to a US base in Ramstein, Germany, and then deployed to Ukraine, according to the Polish plan.

The possibility of the jets travelling from a US-NATO base “into airspace that is contested with Russia over Ukraine raises major concerns for the whole NATO alliance,” according to Pentagon spokesperson John Kirby.

“We will continue to consult with Poland and our other NATO allies about this issue and the difficult logistical challenges it presents, but we do not believe Poland’s proposal is a tenable one,” Kirby said in a statement.

“It is simply not clear to us that there is a substantive rationale for it,” he added.

While a significant part of Ukraine’s air force remains intact since the war began on February 24, both Ukraine and Russia have sustained significant losses and neither controls the airspace over the country.

Ukraine’s air force fleet consists of ageing Soviet-era MiG-29 and Sukhoi-27 jets, and heavier Sukhoi-25 jets and these are the only planes Ukrainian pilots could fly immediately without additional training.

And while Ukraine has stepped up calls for Western allies to supply it with military jets, providing Kyiv with warplanes poses serious risks.

Russia has warned that supporting Ukraine’s air force would be seen in Moscow as participating in the conflict and open up suppliers to possible retaliation.

NATO has said it does not want direct conflict with Moscow, a fellow nuclear-armed power, and US President Joe Biden has ruled out sending American troops into Ukraine to fight, something the Pentagon has said would apply to troops on the ground or in the air, flying missions.

After Poland announced its offer, US Undersecretary of State for Political Affairs Victoria Nuland told US legislators that Washington had been caught off guard.

“To my knowledge, it wasn’t pre-consulted with us that they planned to give these planes to us,” Nuland told a Senate Foreign Relations Committee hearing. “So I think that actually was a surprise move by the Poles,” she said.

While several legislators pressed for the jets to be rushed to Ukraine, Nuland refused to commit Washington to support or facilitate the exchange.

“I will continue to convey the very strong bipartisan view of this committee that these planes need to get to Ukraine,” she told the panel. “There are a number of factors to consider here and there are some mixed views among Allies and even within the administration.”

Earlier on Tuesday, British Defence Secretary Ben Wallace said his country would stand by Poland if it handed over the jets, noting that it could face the “direct consequence” of its decision.

“And so we would protect Poland, we’ll help them with anything that they need,” Wallace said on Sky News.

Polish Prime Minister Mateusz Morawiecki said any decision about delivering offensive weapons must be made unanimously by NATO members.

“This is why we are able to give all of our fleet of jet fighters to Ramstein, but we are not ready to make any moves on our own because … we are not a party to this war,” he said.

Separately, the US military announced it would reposition two Patriot missile batteries to Poland to proactively “counter any potential threat to US and Allied forces and NATO territory.”