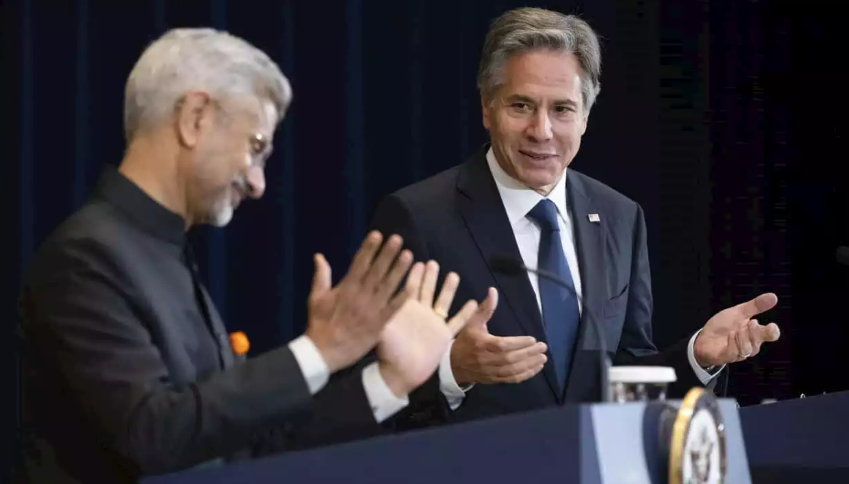 West News Wire: In response to criticism from India, which claims it is the target of a $450 million F-16 fighter jet contract between Washington and Islamabad, US Secretary of State Antony Blinken has defended US military sales to Pakistan.

Blinken stated that the military package agreed earlier this month was for maintenance of Pakistan’s current fleet during a news conference in the capital of the United States on Tuesday.

“These are not brand-new systems, aircraft, or weaponry. Blinken, who spoke with India’s External Affairs Minister Subrahmanyam Jaishankar, said that it was maintaining what they already had.

“Pakistan’s program strengthens its ability to counter terrorist threats coming from Pakistan or the surrounding area. Nobody wants those threats to be carried out without consequence, he said.

Blinken met with Jaishankar a day after he held separate talks with his counterpart from Pakistan, Bilawal Bhutto Zardari.

“In our discussions, we talked about the importance of managing a responsible relationship with India,” Blinken said after that meeting on Monday, without elaborating.

The US has maintained strong ties to both India and Pakistan for decades, despite various points of tension between the nations.

While Jaishankar did not criticise Blinken publicly over the F-16 deal, the Indian foreign minister said during an event on Sunday that the US position was not “fooling anybody”.

“For someone to say, I’m doing this because it’s for counter-terrorism, when you’re talking of an aircraft like the capability of the F-16, everybody knows where they are deployed,” he said, referring to the fleet’s positioning against India.

“Very honestly, it’s a relationship that has neither ended up serving Pakistan well nor serving American interests well,” he added.

Pakistan’s military relies heavily on the US, but the relationship has strained in recent years, particularly during the war in Afghanistan.

For its part, India historically has bought military equipment from Moscow and has pressed the US to waive sanctions required under a 2017 law for any nation that buys “significant” military hardware from Russia.

Jaishankar said on Tuesday that India also has purchased arms from countries such as the US, France and Israel, while noting that India had the right to “exercise a choice which we believe is in our national interest” and was free to reject changes due to “geopolitical tensions”.

Over the last 30 years, the US has made strengthening its relationship with India a high priority as it seeks allies in the region to help counter the growing strength of China.

The US has stayed largely quiet on India’s continued relationship with Russia following the invasion of Ukraine, and was pleased when India’s Prime Minister Narendra Modi told Russian President Vladimir Putin that it was “not a time for war”.

President Joe Biden held talks with Modi in April as Washington sought more help to apply economic pressure on Moscow over the war.

Jaishankar has suggested that India is working behind the scenes and that it “weighed in” with Russia during negotiations to open grain shipments from the Black Sea, part of what Jaishankar called the country’s widening “international footprint”.

“There are many more regions where we will be intersecting with American interests. It is to our mutual benefit that this be a complementary process,” Jaishankar said.

Meanwhile, Blinken said during the news conference that India and the US should lean into “core values including respect for universal human rights, like freedom of religion and belief and freedom of expression, which makes our democracies stronger”.

India has been charged with a number of human rights violations in recent years, including restrictions on religious freedom, notably with regard to Muslims.

Blinken stated on Tuesday that both India and the US were devoted to democracy, but “from their history, heritage, and sociological context,” to which Jaishankar indirectly answered.

He stated, “India does not believe that the quality or effectiveness of democracy should be determined by vote banks.