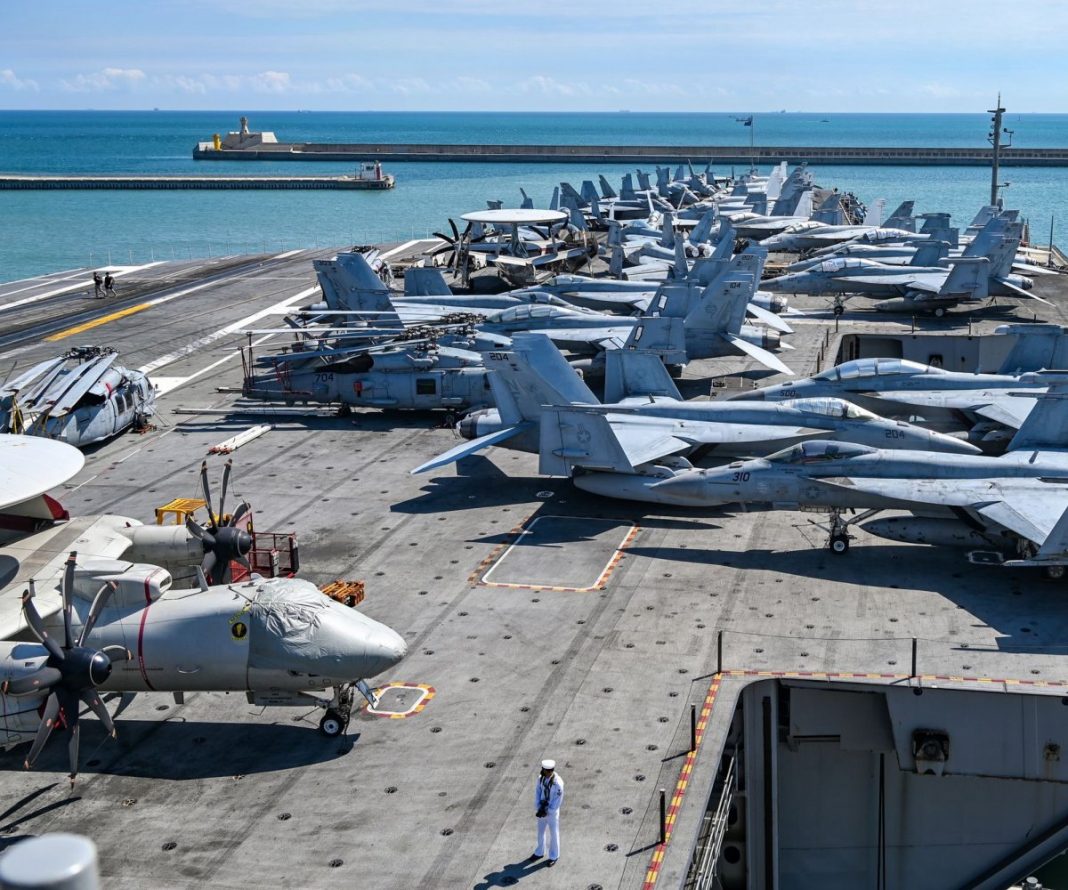 West News Wire: As tensions with North Korea rise, a US aircraft carrier and the ships it is accompanied by have begun conducting joint military drills with South Korean forces.

The nuclear-powered USS Ronald Reagan aircraft carrier joined the drills, which got underway on Monday off the east coast of the Korean Peninsula, just one day after North Korea conducted another ballistic missile test.

The four-day training is scheduled to coincide with US Vice President Kamala Harris’s trip to Seoul later this week.

According to US Rear Admiral Buzz Donnelly, the commanding officer of the Ronald Reagan Strike Group, “the visit is of strategic importance to the US and Republic of Korea relationship and is a clear and unmistakable expression of US commitment to the Alliance.”

The South Korean navy said the exercises are aimed at demonstrating the allies’ “powerful resolve to respond to North Korean provocations” and improving their ability to perform joint naval operations.

It is the first US-South Korea joint military training involving a US aircraft carrier since 2017.

Pyongyang has condemned previous US military deployments and joint drills as proof of hostile policies by Washington and Seoul.

North Korea has conducted a record number of weapons tests this year, launching dozens of ballistic rockets, including the first intercontinental ballistic missile in five years.

Earlier this month, North Korea passed a law allowing it to carry out a preventive nuclear attack and declaring its status as a nuclear-armed state “irreversible”.

In response, the US and South Korean governments released a joint statement expressing concern about what they called “escalatory and destabilizing messaging related to nuclear weapons use” by North Korea.

“The United States reiterated its ironclad and unwavering commitment to draw on the full range of its military capabilities, including nuclear, conventional, missile defense, and other advanced non-nuclear capabilities, to provide extended deterrence for the ROK [the Republic of Korea/South Korea],” the statement said.

South Korea is not nuclear-armed, but it falls under Washington’s so-called “nuclear umbrella” a US pledge to defend allies by all means possible in the case of a nuclear attack.

Former President Donald Trump engaged in direct talks with his North Korean counterpart Kim Jong Un during his tenure, but high-level meetings between the two countries came to a halt under current President Joe Biden.

After the first meeting between Trump and Kim in 2018, the nations said in a joint statement that North Korea was committed to “work toward complete denuclearization of the Korean Peninsula”.

But the pledge was never followed by efforts to end the country’s nuclear weapons programme.

North Korea carried out its first nuclear weapon test in 2006, in violation of an international ban on such testing. Since then, the United Nations Security Council has unanimously passed numerous resolutions that imposed sanctions on the country over its nuclear programme.