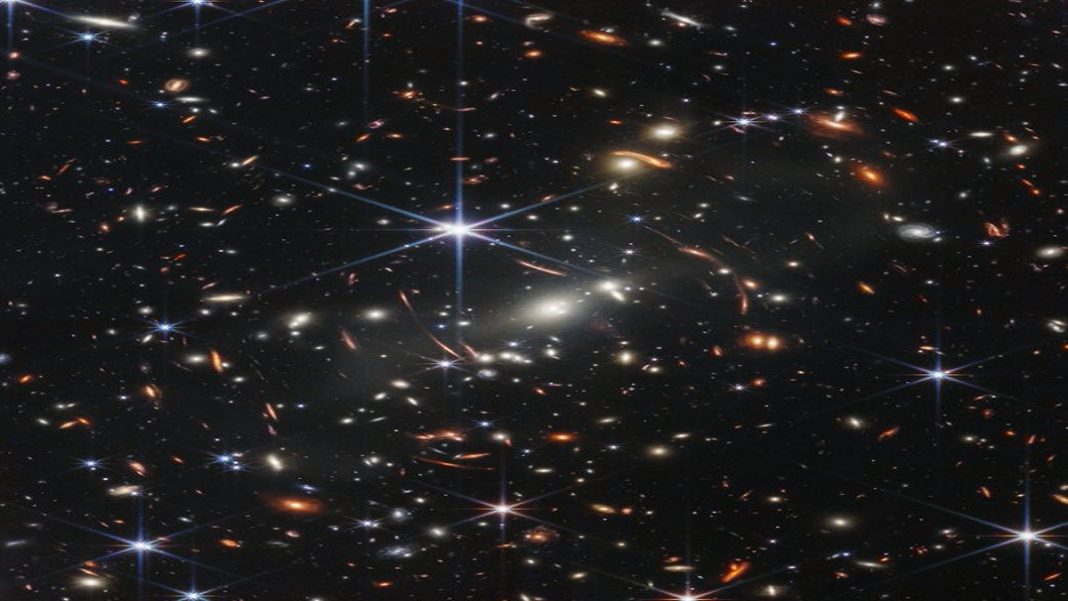 West News Wire: The first full-color image of the universe captured by the James Webb Space Telescope, dubbed “the deepest, sharpest infrared view of the universe” by NASA, has been unveiled by President Joe Biden.

Biden called it “an historic day” as the largest and most potent space science telescope in the world opened a “new window into the history of our universe” during a ceremony at the White House on Monday evening.

Before the image was made public, Biden said, “Today we’re going to get a glimpse at the first light to shine through that window.” The image showed brilliant white, yellow, and orange lights, which NASA said represented “galaxies once invisible to us.”

“Light from other worlds, orbiting stars far beyond our own,” Biden said. “The oldest documented light in the history of the universe from over 13 billion let me say that again 13 billion years ago.”

The image will be followed on Tuesday by the release of four more galactic beauty shots from the telescope’s initial outward gazes.

“We’re going to give humanity a new view of the cosmos,” NASA Administrator Bill Nelson told reporters last month in a briefing. “And it’s a view that we’ve never seen before.”

The $9bn Webb observatory, named after the man who ran NASA during the Apollo space programme that put humans on the moon in the 1960s, was designed to peer through the cosmos to the dawn of the known universe, ushering in a revolutionary era of astronomical discovery.

It soared off from French Guiana on South America’s northeastern coast on December 25, 2021, before reaching its final destination 1.6 million kilometres (one million miles) from Earth less than a month later. NASA is collaborating on Webb with the European and Canadian space agencies.

With Webb now finely tuned and fully focused, scientists will embark on a competitively selected list of missions exploring the evolution of galaxies, the life cycles of stars, the atmospheres of distant exoplanets and the moons of our outer solar system.

Built to view its subjects chiefly in the infrared spectrum, Webb is about 100 times more sensitive than its 30-year-old predecessor, the Hubble Space Telescope, which operates mainly at optical and ultraviolet wavelengths.

Hubble has stared as far back as 13.4 billion years. It found the light wave signature of an extremely bright galaxy in 2016. Astronomers measure how far back they look in light years, with one light year being 9.5 trillion kilometres (5.9 trillion miles).

“Webb can see backwards in time to just after the Big Bang by looking for galaxies that are so far away that the light has taken many billions of years to get from those galaxies to our telescopes,” said Jonathan Gardner, Webb’s deputy project scientist during a recent briefing.

The much larger light-collecting surface of Webb’s primary mirror an array of 18 hexagonal segments of gold-coated beryllium metal enables it to observe objects at greater distances, thus further back in time, than Hubble or any other telescope.

All five of Webb’s introductory targets were previously known to scientists.