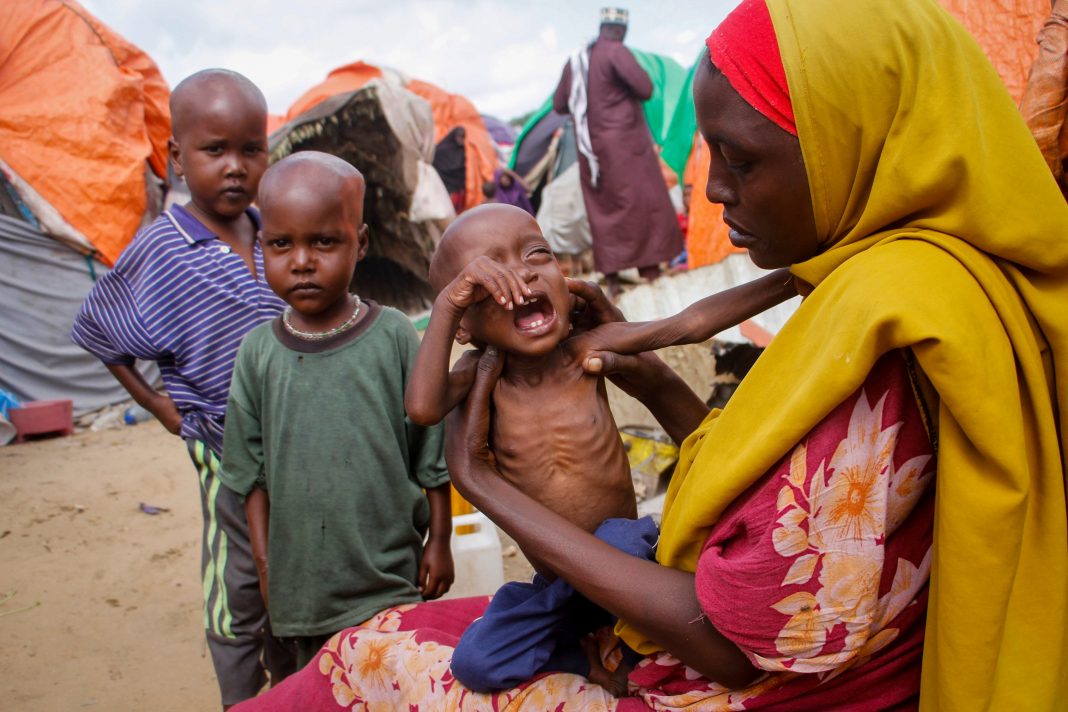 West News Wire: Up to 345 million people are on the verge of famine, with 70 million of those people being pushed over the edge by the conflict in Ukraine, according to the United Nations food chief, who has warned that the world is facing “a global emergency of unparalleled magnitude.”

In the 82 countries where the UN World Food Program operates, there are 345 million people who are acutely food insecure, which is more than twice the number of people who were in this situation prior to the COVID-19 pandemic’s arrival in 2020, according to David Beasley, executive director of the agency.

He stated that the fact that 50 million of those individuals live in 45 different nations and are “knocking on famine’s door” is quite alarming.

“What was a wave of hunger is now a tsunami of hunger,” he said, pointing to rising conflict, the pandemic’s economic ripple effects, climate change, rising fuel prices and Russia’s invasion of Ukraine.

Despite an agreement in July allowing Ukrainian grain to be shipped from three Black Sea ports blockaded by Russia and continuing efforts to get Russian fertiliser back to global markets, “there is a real and dangerous risk of multiple famines this year”, he said.

“And in 2023, the current food price crisis could develop into a food availability crisis if we don’t act.”

The Security Council was focusing on conflict-induced food insecurity and the risk of famine in Ethiopia, northeastern Nigeria, South Sudan and Yemen. But Beasley and UN humanitarian chief Martin Griffiths also warned about the food crisis in Somalia, which they both recently visited, and Griffiths also put Afghanistan high on the list.

“Famine will happen in Somalia. Be sure it won’t be the only place either,” Griffiths said.

He cited recent assessments that identified “hundreds of thousands of people facing catastrophic levels of hunger” meaning they are at the worst famine level.

Beasley recalled his warning to the council in April 2020 “that we were then facing famine, starvation of biblical proportions”. He said then the world “stepped up with funding and tremendous response, and we averted catastrophe”.

“We are on the edge once again, even worse, and we must do all that we can all hands on deck with every fibre of our bodies,” he said. “The hungry people of the world are counting on us and we must not let them down.”

Griffiths said the widespread and increasing food insecurity is a result of the direct and indirect effect of conflict and violence that kills and injures civilians, forces families to flee the land they depend on for income and food, and leads to economic decline and rising prices for food they cannot afford.

After more than seven years of war In Yemen, he said, “some 19 million people six out of 10 are acutely food insecure, an estimated 160,000 people are facing catastrophe, and 538,000 children are severely malnourished”.

Beasley said the Ukraine war is stoking inflation in Yemen, which is 90 percent reliant on food imports. The World Food Programme hopes to provide aid to about 18 million people, but its costs have risen 30 percent this year to $2.6bn.

As a result, it has been forced to cut back so Yemenis this month are getting only two-thirds of their previous rations, he said.

Beasley said South Sudan faces “its highest rate of acute hunger since its independence in 2011” from Sudan. He said 7.7 million people, more than 60 percent of the population, are “facing critical or worse levels of food insecurity”.

Without a political solution to escalating violence and substantial spending on aid, “many people in South Sudan will die”, he warned.

In northern Ethiopia’s Tigray, Afar and Amhara regions, more than 13 million people need life-saving food, Griffiths said. He pointed to a survey in Tigray in June that found 89 percent of people food insecure, “more than half of them severely so”.

Beasley said a truce in March enabled WFP and its partners to reach almost five million people in the Tigray area, but resumed fighting in recent weeks “threatens to push many hungry, exhausted families over the edge”.

In northeast Nigeria, the UN projects that 4.1 million people are facing high levels of food insecurity, including 588,000 who faced emergency levels between June and August, Griffiths said. Almost half of those people could not be reached because of insecurity, and the UN fears “some people may already be at the level of catastrophe and already dying”.

Griffiths urged the Security Council to “leave no stone unturned” in trying to end these conflicts, and to step up financing for humanitarian operations, saying UN appeals in those four countries are all “well below half of the required funding”.