wnw24
Home Politics UN raises $1.3 B for Yemen in appeal shadowed by the Ukraine conflict 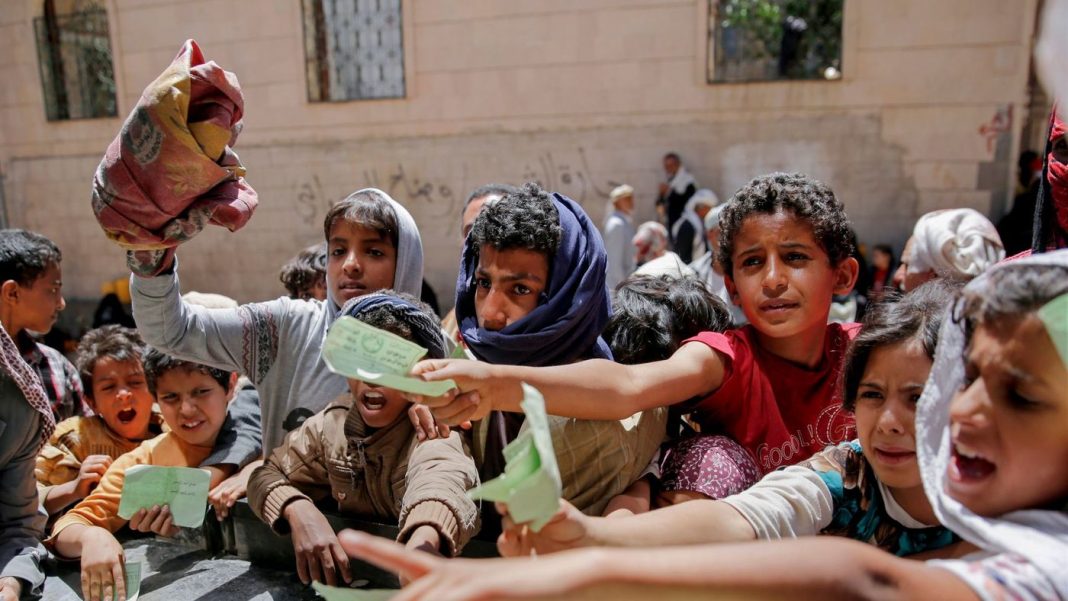 West News Wire: A United Nations appeal for Yemen Wednesday raised $1.3 billion, less than a third of what the organization had targeted to help the Arab world’s poorest country, the U.N.’s humanitarian chief announced.

Martin Griffiths called the total “a disappointment,” given that the U.N. had set out to raise $4.27 billion to help alleviate the world’s worst humanitarian disaster. Some 161,000 people are likely to experience famine in Yemen in 2022.
“We hoped for more,” he said in a somber tone at the end of the conference, calling the outlook for Yemen “dire.” The country, he said, “needs money, funding, urgent, rapid, in the bank to the people of Yemen.”

The conference came as world attention focuses on the war in Ukraine, which has overshadowed other humanitarian crises since the Russian invasion on Feb. 24 raising concerns that that Yemen’s plight may be forgotten. Over 3 million people have fled Ukraine, in Europe’s largest exodus since World War II.

A prolonged conflict in Ukraine is likely to make it harder for Yemenis to meet their basic needs, as food prices, especially the cost of grain, are expected to increase. Yemen depends almost entirely on food imports, with 22% of its wheat imports coming from Ukraine, according to the World Food Program.
Griffiths said some nations did meet expectations. He was likely referring to Saudi Arabia and the United Arab Emirates, last year, Saudi Arabia pledged $430 million and the UAE $230 million.

“It is a disappointment that we weren’t able as yet to get pledges from some we thought we might hear from,” he said. “We will be following up to see if we can increase this sum” to at least match last year’s.

The 2021 conference raised only about $1.7 billion for Yemen out of $3.85 billion the U.N. had sought. However, the overall amount reached over $2.3 billion by the end of the year, according to U.N. Secretary-General Antonio Guterres.

Only one Arab nation, Kuwait which pledged $10 million announced donations to the Yemen effort, according to a tally of pledges. The European Union and its members combined pledges of over $407 million for Yemen this year, including $118 million from the United Kingdom.

U.S. Secretary of State Antony Blinken said the U.S. will donate nearly $585 million in aid to Yemen this year. Blinken also called for an end to the grinding war. “We have to work relentlessly to bring the conflict to an end, knowing that as long as it goes on, so will the humanitarian crisis,” he said.

Read More
Why are Treasury yields in the United States falling?

The conflict has in recent years become a regional proxy war that has killed more than 150,000 people, including over 14.500 civilians.

The majority of Yemen’s roughly 32 million people live in Houthi-held areas. The rebels have for years been implicated in aid theft and withholding in extortion schemes.

U.N. experts earlier this year said they documented that the rebels provided or denied humanitarian aid to families “solely on the basis whether their children participated in fighting or to teachers on the basis of whether they taught the Houthi curriculum.”

The U.N. Office for the Coordination of Humanitarian Affairs, or OCHA, has warned that a total of 19 million people are expected to face acute food insecurity between June and December an increase of around 20% compared to the first six months of 2021.

It said that half of the country’s health facilities are shuttered or destroyed. Yemeni currency, the rial, lost 57% of its value in 2021 in government-run areas, while persistent fuel shortages drove up the prices of food and other basic commodities.

More than 4 million Yemenis have been driven from their homes; around one-fifth of newly displaced people in 2021 were in the energy-rich province of Marib which Houthis have attempted to seize for over a year, it said.

Ghalib al-Najjar and his family lives in the Dharwan camp on the outskirts the rebel-held Sanaa. The 48-year-old father, his wife, and seven children are at risk of famine amid price hikes and lack of humanitarian assistance.

“In the morning, half of us are fasting and I’m doing my best to provide food if available to the others,” he said in a recent interview. “We live like ants on the ground or fish in the sea. We eat what we find on our way.”

Speakers from around the globe called on warring parties to de-escalate.

“Allowing the war to continue is a choice. So is ending it. I appeal to the parties to choose peace,” the U.N. chief said.