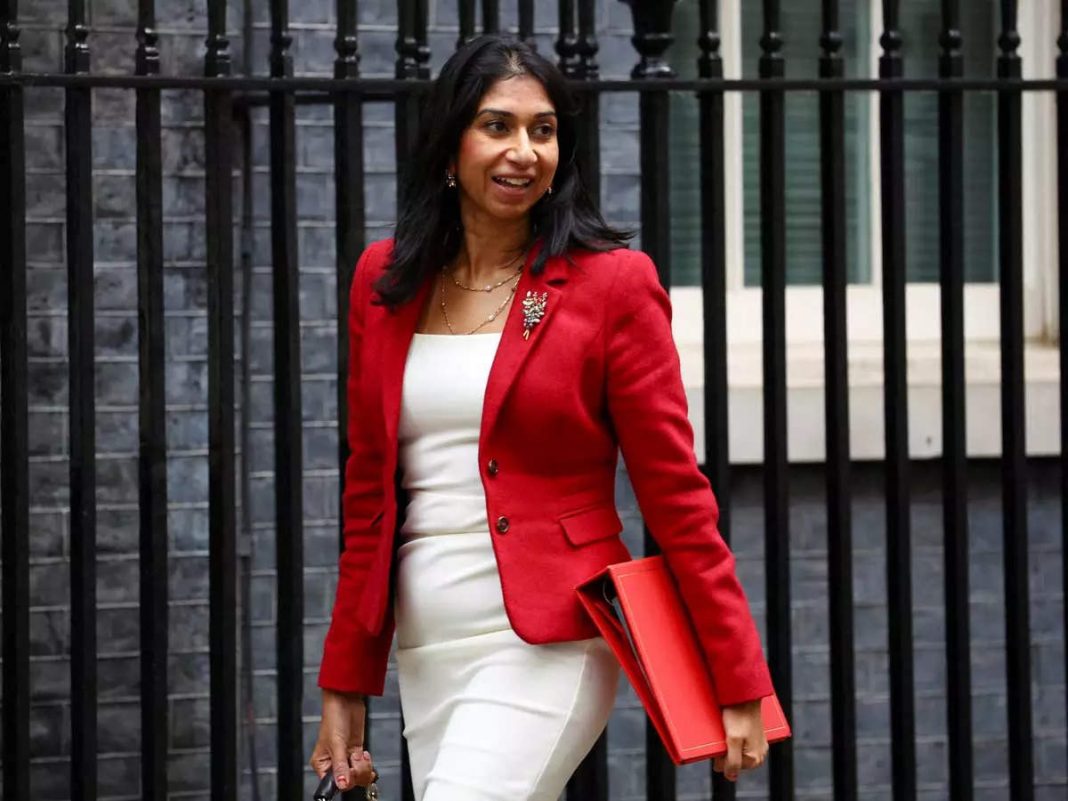 West News Wire: Days after an immigration facility was attacked with firebombs, Britain’s interior minister came under fire for calling the migrants traveling across the English Channel in small boats an “invasion.”

Home Secretary Suella Braverman used the phrase to describe the circumstances at a new arrivals processing center where over 4,000 individuals have been confined in a space meant to hold 1,600.

Braverman stated that “illegal immigration is out of control” on Monday in reference to small-boat crossings as “the assault of our southern shore.”

She urged people to avoid acting as though all of the migrants crossing the Channel were refugees in need.

“In a job like mine you have to choose your words very carefully,” he told Sky News. “And I would never demonize people coming to this country in pursuit of a better life.”

Prime Minister Rishi Sunak, who appointed Braverman after he took office last week, told his Cabinet on Tuesday that Britain “would always be a compassionate, welcoming country,” his spokesman said.

Braverman a leading figure on the right wing of the governing Conservative Party who supports expelling people who enter the U.K. without authorization did not respond to the criticism on Tuesday.

The number of asylum-seekers attempting to reach Britain by boat has increased steadily, and the system for considering applications has slowed to a crawl amid turmoil in the Conservative government, which is on its third prime minister and third home secretary this year.

Manston a former airfield in southeast England is supposed to be a temporary processing center where new arrivals spend 24 hours before moving on to longer-term accommodation, but refugee groups say some people have been stuck there for weeks. Some families are sleeping in tents, and there have been cases of diphtheria and scabies.

Chief Inspector of Prisons Charlie Taylor said that when he visited the site recently, he saw people sleeping on floors and “lots and lots of people in a room, all squished in together.”

“For a few hours, that would be acceptable, but where people are spending long periods of time there, it just isn’t,” he told Sky News.

The government said “large numbers” of people were being moved out of Manston on Tuesday to relieve pressure. It said a facility some 20 miles (32 kilometers) away in the port town of Dover that was firebombed Sunday had reopened.

Police said counterterrorism officers were leading the investigation into the firebombing, which slightly injured two staff members. The suspect, a 66-year-old man from a town about 100 miles (160 kilometers) away, threw “a number of crude incendiary devices,” then drove away and killed himself.

Detective Chief Superintendent Olly Wright of Counter Terrorism Policing South East said the attack was “likely to be driven by some form of hate-filled grievance.”

Just over 48,000 people applied for asylum in the U.K. in 2021, fewer than in Germany, France or Spain. But there has been a sharp increase in the number of people trying to cross the Channel in dinghies and other small craft as alternative routes, such as stowing away on trucks, have become more difficult.

Britain and France have wrangled over how to stop the people-smuggling gangs that organize the journeys.

The contentious idea, which the British government claims will prevent people from attempting the Channel crossing and undermine the economic viability of smuggling organizations, would send anyone who arrive in small boats on a one-way trip to Rwanda. The idea is being contested in court because critics claim it is immoral and unworkable.

The Manston issue, according to Mishka Pillay, campaigns consultant with the organization Detention Action, started because “the government has failed to process asylum petitions properly,” leading to a significant backlog.

According to Pillay, “the home secretary created this issue.”