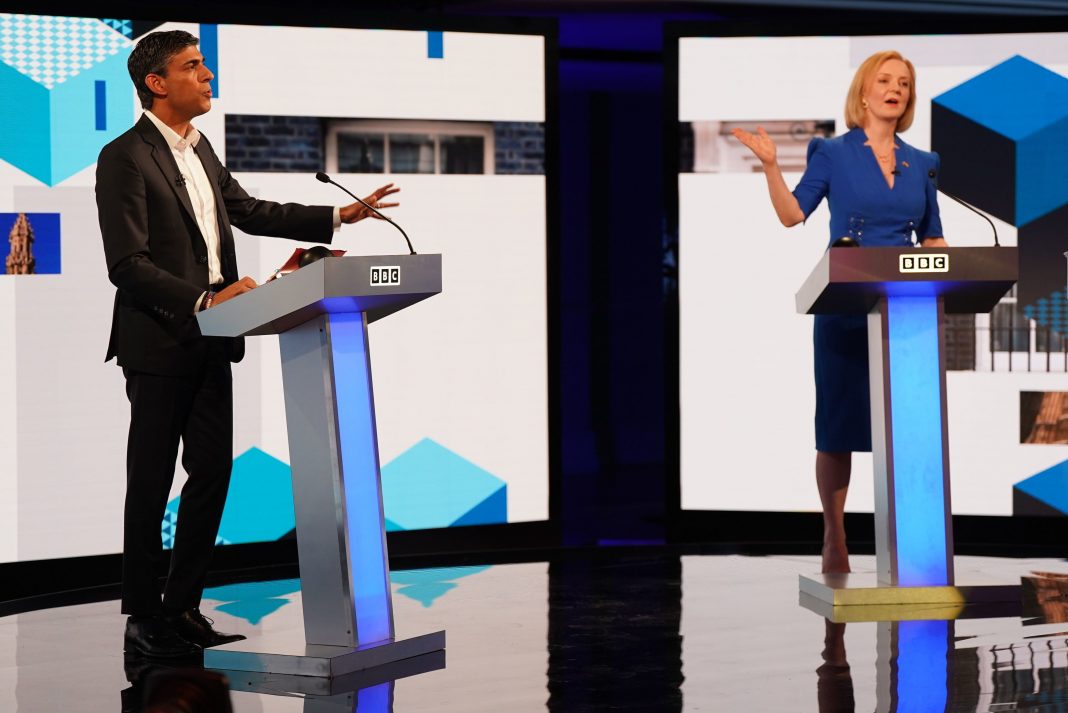 West News Wire: In a televised discussion, the final two contenders for the position of British prime minister squared off over their respective tax and spending policies as well as the status of the economy.

Foreign secretary Liz Truss and former finance minister Rishi Sunak’s primetime debate on Monday marked the start of a crucial 12-day period that will feature three of these live TV debates and four hustings for Conservative party members who will decide the race and start receiving their postal votes next week.

The bitterness of the Tory leadership race to succeed outgoing Prime Minister Boris Johnson has grown over the past few weeks.

Truss, the bookmakers’ favourite to win the leadership election, told Sunak his emphasis on balancing the government’s books would tip the economy into recession.

“Crashing the economy in order to pay a debt back quicker would be a massive mistake,” Truss said.

Sunak, whose resignation from the government earlier this month set in motion Johnson’s downfall, said Truss’s plan to cut taxes was nothing more than a “sugar rush” for the economy that would be followed by a crash.

The final stretch of a weeks-long contest has pit Sunak, a former Goldman Sachs banker who has raised the tax burden towards the highest level since the 1950s, against Truss, a convert to Brexit who has pledged to cut taxes and regulation.

Whoever wins when the result is announced on September 5 will inherit some of the most difficult conditions in Britain in decades.

Inflation is on course to hit 11 percent annually, growth is stalling, industrial action is on the rise and the pound is near historic lows against the dollar.

Their quarrel on Monday underlined divisions in Britain’s ruling party about the best way to manage the economy, with Truss pitching a continuation of Johnson’s big-spending ethos, and Sunak portraying the classic Conservative fiscal hawk.

“Does anyone think that the sensible thing to do is go on a massive borrowing spree worth tens of billions of pounds and fuel inflation even further?” asked Sunak, who repeatedly interrupted Truss.

Truss said she would challenge the economic orthodoxy of Britain’s powerful finance ministry and dismissed Sunak’s warnings about her plans as “project fear” a line used by Brexit supporters during the 2016 referendum on the country’s European Union membership.

According to a quick survey of 1,032 voters conducted by the market research firm Survation, Sunak was rated as the debate’s finest performer by 39% of the British public, compared to Truss’s 38%.

Truss garnered the support of 47 percent of Conservative voters, while Sunak received 38 percent. Questions regarding his family’s tax troubles and his earlier choice to maintain residency in the United States have hurt Sunak’s standing with the public.

According to a YouGov poll of Conservative Party members released last week, Truss had a 24-point advantage over Sunak in the fight for the position of leader.

The opposition Labour Party claimed that throughout the discussion, both candidates disparaged the Conservatives’ record of governance and that neither had put forth a strategy to address the growing cost-of-living crisis.