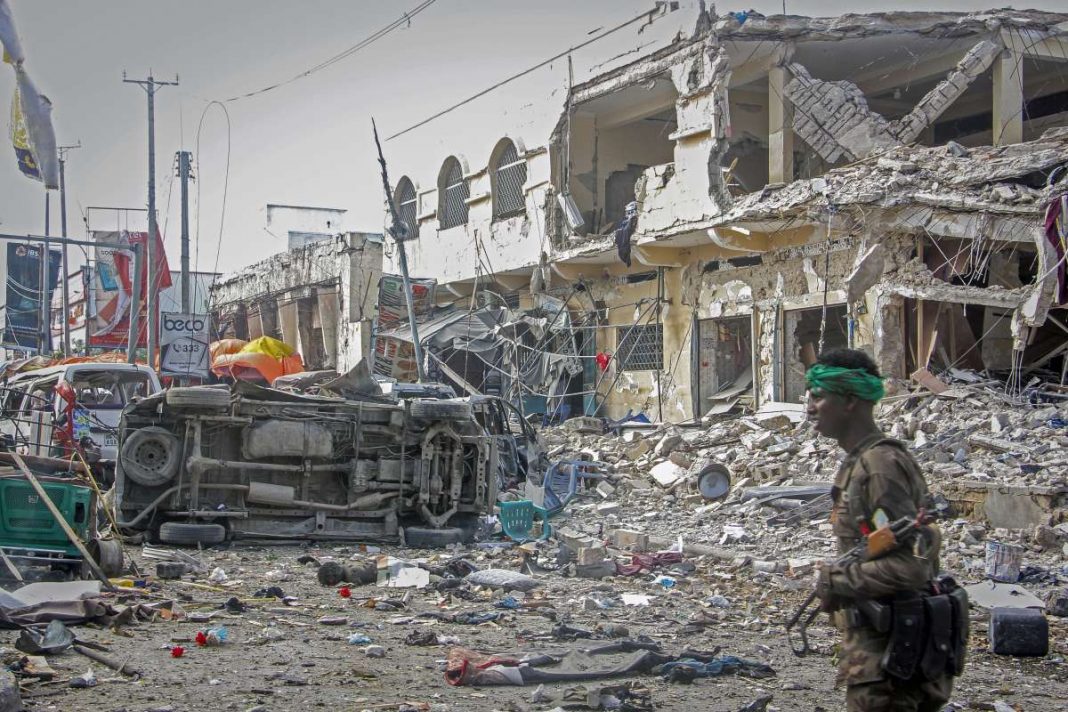 Mohamud told reporters on Sunday that he expected the death toll from the twin explosions to increase further and that the al-Shabab armed group was responsible for the strikes.

After viewing the blast scene, the Somali leader said, “Our people who were killed included mothers with their children in their arms, dads who had medical ailments, students who were sent to study, and businessmen who were suffering with the lives of their families.”

Authorities said that a school and the Somali education ministry were the targets of the attack on Saturday at the bustling Sobe crossroads.

Sadiq Doodishe, a police spokesperson, told reporters that women, children and the elderly had been killed in the attack.

The first explosion hit the ministry; then the second blast occurred as ambulances arrived and people gathered to help the victims, police officer Nur Farah told the Reuters news agency.

A Reuters journalist near the blast site said the two explosions occurred within minutes of each other and smashed windows in the vicinity. Blood from victims of the blasts covered the tarmac just outside the building, he said.

Moments after the blasts, a large plume of smoke rose over the site.

The Aamin ambulance service said on Saturday that they had collected at least 35 wounded people. One ambulance responding to the first attack was destroyed by the second blast, director Abdulkadir Adan added in a tweet.

A driver and a first aid worker were wounded, he said.

The United Nations Mission in Somalia condemned Saturday’s “vicious attack” and extended its condolences to the families of the victims. Turkey condemned the “heinous” attack, while Qatar firmly rejecting violence and “terrorism” expressed its condolences and wished the wounded a speedy recovery.

The explosions occurred in the same location as Somalia’s largest bombing in October 2017, which killed more than 500 people. In that bombing, a truck bomb exploded outside a busy hotel at the K5 intersection, which is lined with government offices, restaurants and kiosks.

Al-Qaeda-allied al-Shabab, which has been fighting in Somalia for more than a decade, is seeking to topple the central government and establish its own rule based on a strict interpretation of Islamic law.

The group uses a campaign of bombings both in Somalia and elsewhere, and targets have included military installations as well as hotels, shopping centres, and busy traffic areas.

In August, at least 20 people were killed and dozens wounded when al-Shabab fighters stormed the Hayat Hotel in Mogadishu, triggering a 30-hour standoff with security forces before the siege was finally ended.

Mohamud, with support from the United States and allied local militias, has launched an offensive against the group, although results have been limited.