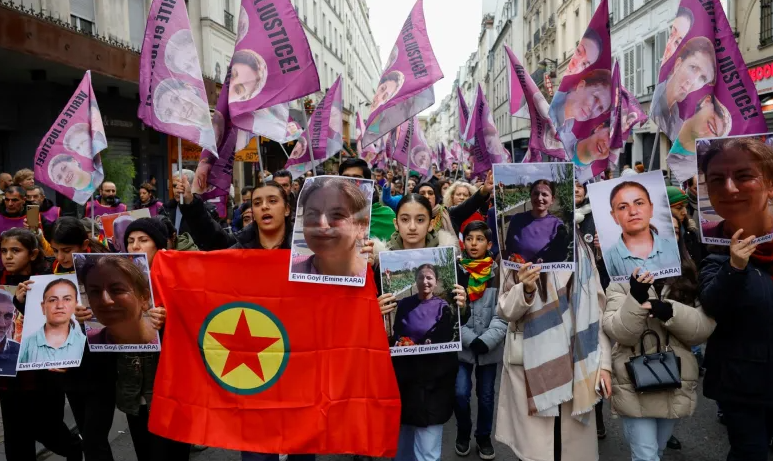 West News Wire: In response to what it deemed “dark propaganda” by Kurdish activists during a march to remember three persons killed in a shooting at a Kurdish cultural center in Paris, Turkey summoned France’s ambassador.

The banned Kurdistan Workers’ Party (PKK) flag was carried in a march in Paris on Monday, and some have argued that Turkey is responsible for the shooting, according to the Turkish state-run Anadolu Agency, which is why Ankara summoned the French ambassador, Herve Magro.

According to Anadolu, Turkey “expects France to respond responsibly over the tragedy and not to permit the [banned PKK] terrorist organization to promote its cunning goal.”

On Saturday, members of France’s Kurdish community and anti-racism activists joined together in Paris in a demonstration of mourning and anger a day after a Kurdish neighbourhood was targeted by a gunman who has admitted racist motivations.

While the gathering was largely peaceful, with marchers holding portraits of the victims, some youths threw objects and set light to cars, and police shot tear gas to disperse the crowd.

During the march, some were spotted waving the banner of the PKK, a group that Turkey, the European Union, and the US consider to be “terrorist.” In order to obtain autonomy for the Kurdish regions of southeast Turkey, the PKK has engaged in a four-decade long violent conflict with the Turkish government.

According to a source who spoke to the AFP news agency, “We voiced our concern with the dark propaganda conducted by PKK circles against our country and with the fact that the French government and some politicians are used as a tool in this propaganda.”

The 69-year-old Frenchman suspected of carrying out the attack, who was released on bail earlier this month and was said to be a gun aficionado with a history of firearms offenses, told authorities he did not know his victims and classified all of them as “non-European.”