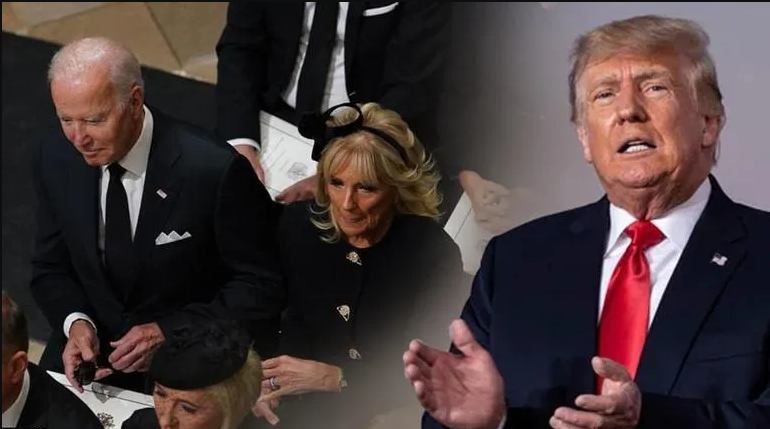 One of the largest gatherings of international leaders in recent memory came together on Monday for the state burial of Britain’s longest-reigning monarch, who passed away on September 8 at the age of 96.

Biden and first lady Jill Biden were among the more than 500 foreign heads of state, monarchs, and dignitaries that attended the ceremony.

According to The Times of London, the leaders of the first family were seated seven rows back in the 14th row of the church’s south transept.

The former president made fun of Biden by posting a picture of the assembled world leaders sitting in the abbey with a red backdrop on his social media network Truth Social.

“If I were president, they wouldn’t have sat me back there.” Trump wrote. “In Real Estate, like Politics and in Life, LOCATION IS EVERYTHING!!!”

In a separate post on his platform, Trump later wrote: “This is what’s happened to America in just two short years. No respect!”

A seating chart published by The Times of London shows those seated apparently arranged in the following order: the queen’s family, monarchs, leaders of the Commonwealth, and other world leaders.

The Telegraph reported that leaders of Commonwealth countries were put in front of other leaders “due to protocol.”

Biden is not related to the queen, a monarch or a Commonwealth member.

Neither is Trump, therefore his placement would likely have been no different.