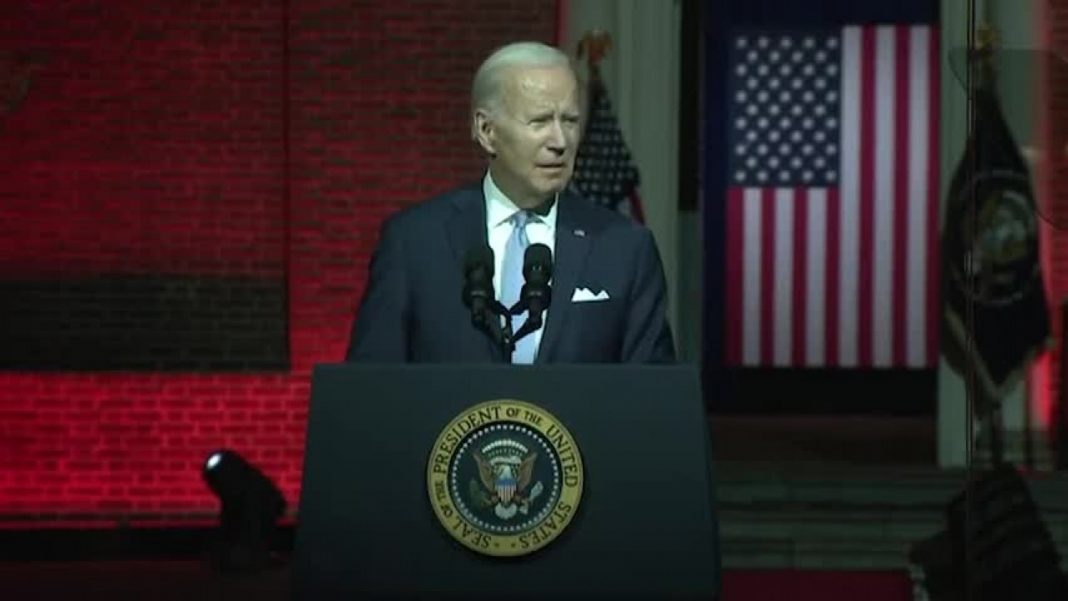 West News Wire: President Joe Biden urged the country to stand together in the face of dangers to American democracy during a rare speech in prime time. He criticized Donald Trump and his “MAGA Republicans.”

At Independence Historical Park in Philadelphia, where hundreds of people were seated in white lawn chairs and Independence Hall’s front was lighted up in red and blue, Biden took the stage shortly after 8 p.m. on Thursday.

“But as I stand here tonight, equality and democracy are under assault,” he continued. “We do ourselves no favor to pretend otherwise. So, tonight, I’ve come to this place where it all began, to speak as plainly as I can to the nation about the threats we face, about the power we have in our hands to meet these threats and about the incredible future that lies in front of us if only we choose it.”

The president mentioned his Oval Office predecessor by name as he assailed Republicans who refuse to accept the 2020 election results, defend those who stormed the Capitol on Jan. 6 or want to strip away abortion rights and other privacy concerns.

“Too much of what’s happening in our country today is not normal,” he said. “Donald Trump and the MAGA Republicans represent an extremism that threatens the very foundations of our republic.”

Biden made a distinction between the so-called MAGA Republicans and other conservatives, stating “not every Republican embraces that extreme ideology.”

“I know, because I’ve been able to work with these mainstream Republicans,” he said. “But there’s no question that the Republican party today is dominated, driven, and intimidated by Donald Trump and the MAGA Republicans and that is a threat to this country.”

Biden’s urgent rhetoric mirrors his 2020 messaging, in which he presented himself as a clear contrast to Trump and the race itself as an inflection point for the nation.

He made that comparison again Thursday, telling the crowd: “Now America must choose to move forward or to move backward, to build a future obsessed about the past, to be a nation of hope, unity, and optimism or a nation of fear, division and of darkness.”

Administration officials had teased Biden’s speech as an extension of his “soul of the nation” message, which first emerged in 2017 after white nationalists clashed with counter protesters in Charlottesville, West Virginia the incident Biden said inspired him to run for president.

Biden on Thursday said all Americans are called by “duty and conscience to confront extremists” and to reject political violence.

“We are still at our core a democracy, and yet, history tells us that blind loyalty to a single leader and a willingness to engage in political violence is fatal to democracy,” he said.

Biden’s appearance in Philadelphia is his second of three stops in the battleground state of Pennsylvania this week alone.

At Wilkes University, where made the case Tuesday for his administration’s plan for policing and crime prevention, Biden went after MAGA Republicans for their response to the Jan. 6 attack and the FBI search at Trump’s Mar-a-Lago estate.

The GOP issued a preemptive rebuttal of Biden’s remarks, with House Minority Leader Kevin McCarthy speaking in Scranton (Biden’s hometown) just hours before the president took the stage in Philadelphia.

After criticizing Democrats on issues including inflation, crime, and the border, McCarthy demanded that Biden “apologize for slandering tens of millions of Americans as fascists” after the president called the MAGA Republicans’ political philosophy “semi-facism.”

“What Joe Biden doesn’t understand is that the essence of America is the tens of millions of hardworking individuals, loving families, and law-abiding citizens,” McCarthy said. “He demonized them for merely seeking a stronger, safer, and more affluent country.”

The law-abiding, tax-paying American citizen, not the political elite in Washington, is what McCarthy called “the essence of America.” “The soul of America is our commitment to get up and go to work every day, to care for our families, to love our children, to be involved in their education, and to live by the principles of the Constitution,”