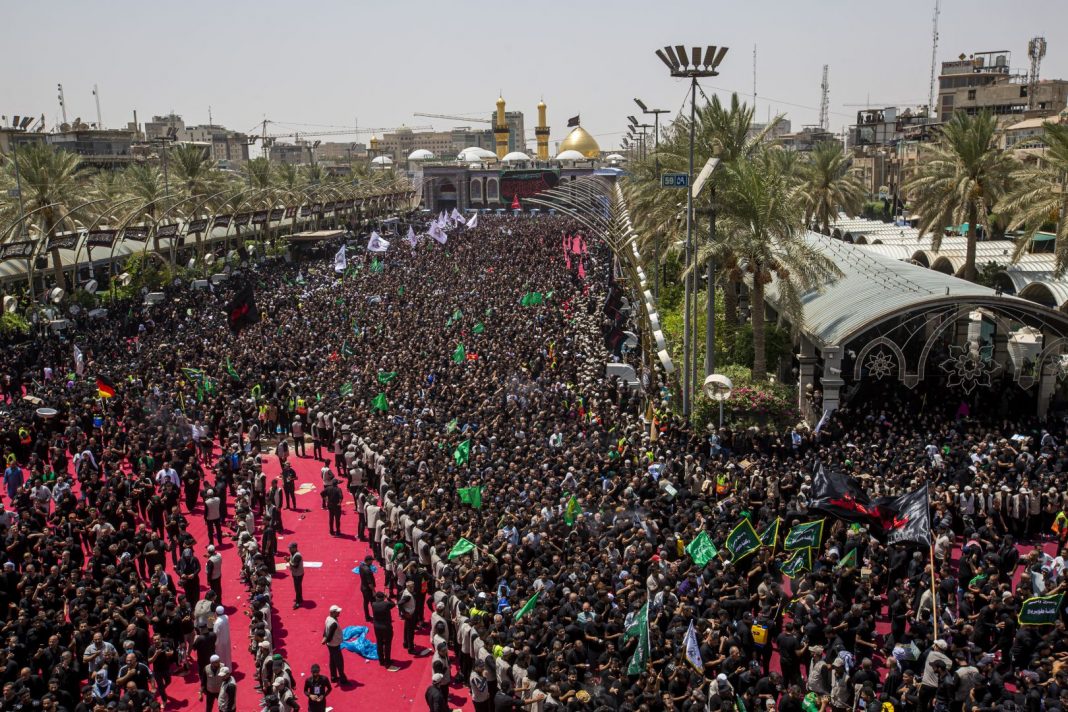 West News Wire: To commemorate the 40th day following the Day of Ashura, the day Hussain ibn Ali, the grandson of Prophet was martyred in the Battle of Karbala, more than 20 million people from all over the world have traveled to the Iraqi city of Karbala, some by air and some by road.

A revolutionary figure from the seventh century, Hussain ibn Ali fought for social justice against the oppressive Yazid ruler. Yazid was a tyrannical leader who oppressed the people’s fundamental rights and dignity.

Hussain saw how his people’s fundamental rights and dignity were being violated, as well as how his society’s moral fiber was being eroded. To support the legitimacy of his own reign, Yazid required Hussain’s devotion and ruled with an iron fist.

Hussain needed to make a choice. Should he swear fealty to a tyrant and remain silent as the populace was persecuted? or take a stand and put his life in danger? Hussain was aware of his possessions as the timeless advice of his grandfather Muhammad resounded in his heart.

Hussain ultimately triumphed thanks to this tragically brave deed of sacrifice. His passing sparked a revolution and brought about Yazid’s tyrannical rule to an end. Hussain remained true to his beliefs all the way to the end, and his legacy continues to motivate many people all around the world.

His selflessness, bravery, and tenacity have inspired people all around the world, from local charity workers to civil rights activists.

The Hussain ibn Ali shrine has undergone numerous expansions and renovations over many centuries to accommodate the rising number of tourists. As more people set the goal of visiting the shrine by Arbaeen, the visits increase at the beginning of Muharram and reach their peak on that day.

By the day of Arbaeen, it is the goal to arrive at the shrine. Muslims will fly from their homes in Europe, the Americas, and Australia to Iraq to participate in the walk. Many people will go by plane to Najaf, where Hussain’s father Ali ibn Abi Talib is buried, and then stroll through Karbala. It will take three to seven days to complete this hike.

The greatest known walking distance is from Ahvaz, Iran (over 550km).

Jabir ibn Abdullah, the prophet’s companion who lived a long life and was the first to make a visit to Hussain ibn Ali’s grave, initiated a centuries-old practice that serves as inspiration for the pilgrimage to the shrine.

The shrine to Hussain ibn Ali has been damaged or threatened to be destroyed by numerous Muslim dynasties, including the Ummayads, the Abbasids, and even modern-day governments like Saddam Hussain and ISIS. Even though Saddam Hussein outright forbade the walk, it was nonetheless carried out covertly. Following his downfall, the walk gained popularity and was dubbed “the walk of the free” as a representation of the triumph of justice over oppression, adopting a similar position to Hussain ibn Ali’s in Karbala.

Only Covid-19 has interfered with the Arbaeen walk more recently. Today, yet again millions of people have made their way to Karbala, without any threat.

The Arbaeen pilgrimage, which attracted 13.8 million travelers to Karbala and the shrine of Hussain ibn Ali in 2017, is the largest annual pilgrimage in the history of the world.

The number of flights landing in Najaf each day is reportedly 800 this year, compared to 150 according to the Iraqi foreign ministry. There are 32 aircraft leaving Najaf every hour towards Karbala on Arbaeen.

The largest yearly peaceful gathering in the world has entered Iraq after years of Covid’s restrictions, smashing the previous record of 19 million.

Following a three-year depression brought on by social upheaval and the Covid-19 outbreak, the flood of pilgrims, mostly from outside the country, into the venerated Iraqi city of Karbala has assisted businesses in recovering.

In order to visit Hussain ibn Ali and his brother Abbas ibn Ali’s gold-domed shrines in Karbala, millions of pilgrims go on foot from all over the world.

The National was told by Azhar Al Kalash, owner of two hotels in Karbala, that “the numbers this year are larger than what we expected.” Pilgrims are en masse and are rushing in.

Foreign pilgrims stayed away from Karbala due to the coronavirus and violence associated with the 2019 pro-reform riots, which broke out in significant cities in central and southern Iraq. Even though Iraq loosened travel restrictions last year, the majority of the 80,000 international pilgrims who were permitted entry were Iranians. There are no restrictions in place this year.

Like other companies, Mr. Al Kalash’s two hotels felt the pain as occupancy rates sharply dropped before rising to approximately 50% of pre-coronavirus levels the following year.

“After all these years, the pilgrims still yearn to make this journey. In Karbala right now, there is a significant religious festival. This level of attendance has never been seen before.

The Commission of Border Crossing Points said on Wednesday that between July 31 and September 12, over 2.8 million international pilgrims of various nationalities entered Iraq.

Five million Iranian pilgrims are anticipated, with a record-breaking 20 million people scheduled to attend Karbala this year. On Saturday, the pilgrimage’s high point will occur.

As opposed to prior years, Mohammed Al Hir, the chairman of the hoteliers’ association in Karbala, told The National that the pilgrims started to arrive in the city at the end of August.

The city’s 1,200 hotels and authorized apartments are all booked up, he claimed.

He explained that this year’s unusual increase in pilgrims was brought on by their desire to return to Karbala.

The provincial authorities in Karbala have opened schools, mosques, and unfinished structures to shelter pilgrims in order to deal with the growing population, while some families have offered to host them in their own homes.