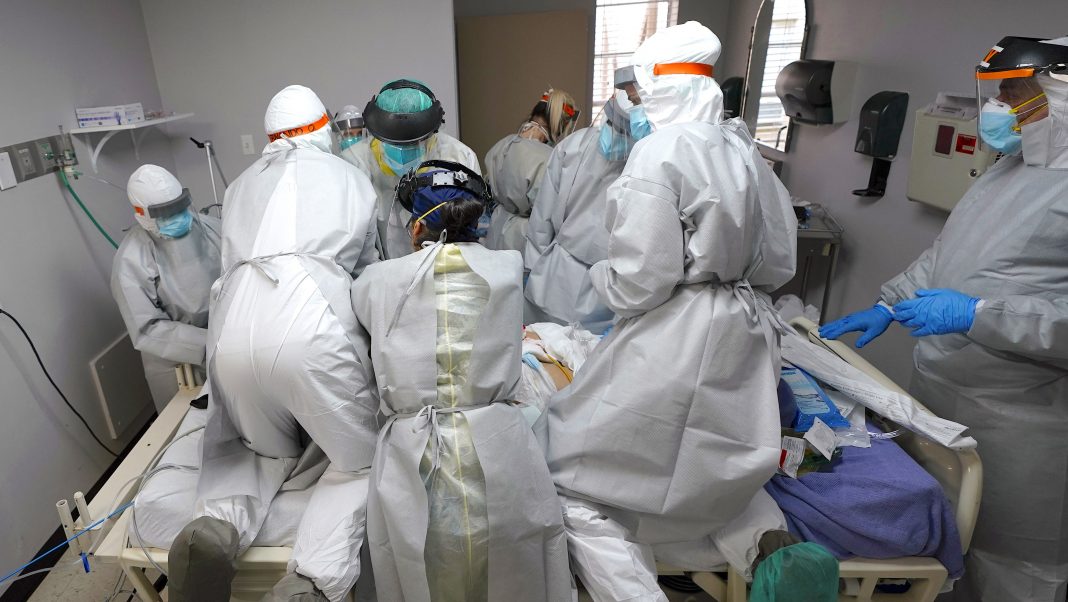 West News Wire: Samantha Reyna, a 21 year old first time mother, was taken aback when she learned she was positive for COVID-19 while in labour at DHR Health Women’s Hospital in McAllen, Texas.

Reyna, who gave birth on Sunday said, “I was genuinely completely astonished.” “I didn’t think I’d be able to stay positive while giving birth.”

Despite the fact that Reyna had very moderate symptoms, she and her husband made the difficult decision to keep their 1-day-old son, Santos, in the nursery to prevent him from contracting COVID-19.

“Because I don’t have him with me, it’s been a little melancholy. I won’t be able to be there for him if he cries or needs anything “Reyna said.

Although there are encouraging declines in COVID-19 cases and hospitalizations across much of the country, many U.S. hospitals, including DHR Health, continue to struggle with significant numbers of COVID-19 patients in need of care. Many of these patients suffer from obesity and other comorbidities, such as diabetes and hypertension, which put them at increased risk from severe disease due to COVID-19, according to health care workers.

“Our population is a sick population. We have one of the worst levels of diabetes and obesity in the nation,” Dr. Federico Vallejo, a pulmonary critical care physician at DHR Health, told reporters. “And as you know this, this can be really difficult for any population. So that’s why we saw incredible cases of sick patients, because our population has increased risk because of these comorbidities.”

A number of pregnant people, who are at increased risk for severe illness from COVID-19 because of their pregnancy, are also coming in positive, hospital officials said, with between 10% to 15% of patients who are delivering testing positive.

Throughout the pandemic, the emotional toll of testing positive has had a significant impact on expectant mothers.

“You could see the fear in their eyes, thinking they and their baby were going to die. Initially there was a lot of misinformation and fear from moms about ‘What do I do now that I am positive? Is my baby going to get it now that I’m positive, because I’m pregnant?'” Dr. Flor A. Limas, an obstetrician and gynecologist at DHR Health, told sources.

Available intensive care units in Texas are still running low, with 8% of beds currently available across the state.

“Omicron is supposed to be mild, but it’s not mild for the health care system,” Dr. Juan Sarmiento, a critical care intensivist at DHR Health, said.

Dr. Juan Marcos Chavez Paz, a critical care physician at DHR Health, added that though virus-related hospitalization numbers are slowly beginning to abate, his team is still not out of the woods yet.

“I think that we passed the tsunami, but we’re still having waves, some big ones coming, and I’m sure there will be more coming in the future.

According to Vallejo, a small fraction of the population in need of care are immunocompromised patients who have fallen ill despite being previously vaccinated.

“We’re seeing the poor souls that are collateral damage, those that did everything right, they got their vaccinations, but unfortunately they’re immunosuppressed because of different circumstances  organ transplants, cancer with chemotherapy  and those sadly get sick, despite the vaccine, but this is more of a fraction of them,” Vallejo said.

The physicians stressed that the vaccines have been a “game-changer,” explaining that the majority of their patients who are becoming severely ill are unvaccinated.

Reyna, who is unvaccinated, has now been reunited with her baby, and said she wants to get vaccinated, and is now considering the shot for her son, too.

“Without vaccines right now, we’d be in hell,” Sarmiento said.