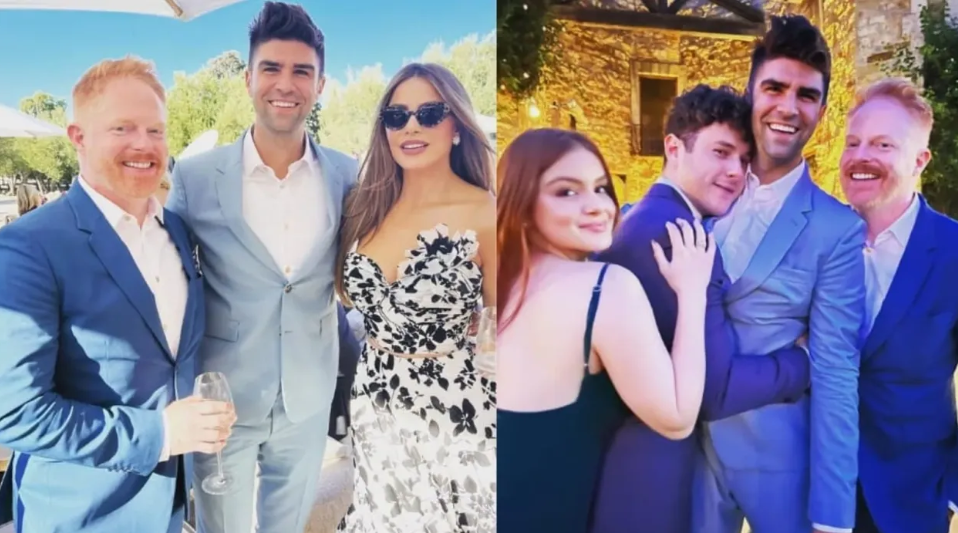 West News Wire: The wedding of Sarah Hyland and Wells Adams was a celebration of love, but it was also a lovely “Modern Family” reunion.

Sofa Vergara, Ariel Winter, Nolan Gould, Jesse Tyler Ferguson, and Ferguson’s husband Justin Mikita were among Hyland’s former castmates present for the special occasion, which had been planned for more than three years due to the epidemic.

Vergara posted a photo of the group from the photo booth with the hashtag “#sarahandwells wedding” and four red heart emojis.

Mikita responded in the comments section, “Love you.

Ferguson, meanwhile, left a joking comment on Vergara’s post. “Everyone looks terrible or is hidden except you and Justin,” he wrote.” I wish you two a long happy life together.”

Mikita also shared a snapshot from the festivities of himself, Ferguson, Winter and Gould, captioning it “family” with a single red heart emoji.

Vergara, who wore a stunning black and white look for the nuptials, shared another photo of herself with Ferguson and Mikita. “Luv u,” she captioned the post.

Hyland, 31, and Adams, 38, began dating in 2017 and were engaged in 2019. The actress and “Bachelorette” alum originally planned to get married in August 2020 but delayed their nuptials multiple times due to COVID-19.

“8.8.20. 2 years of would be marriage bliss. I Love You to Pluto and Back,” Hyland wrote in the caption of an Instagram post earlier in August marking the two-year anniversary of their original wedding date. “Let’s make it official already.”