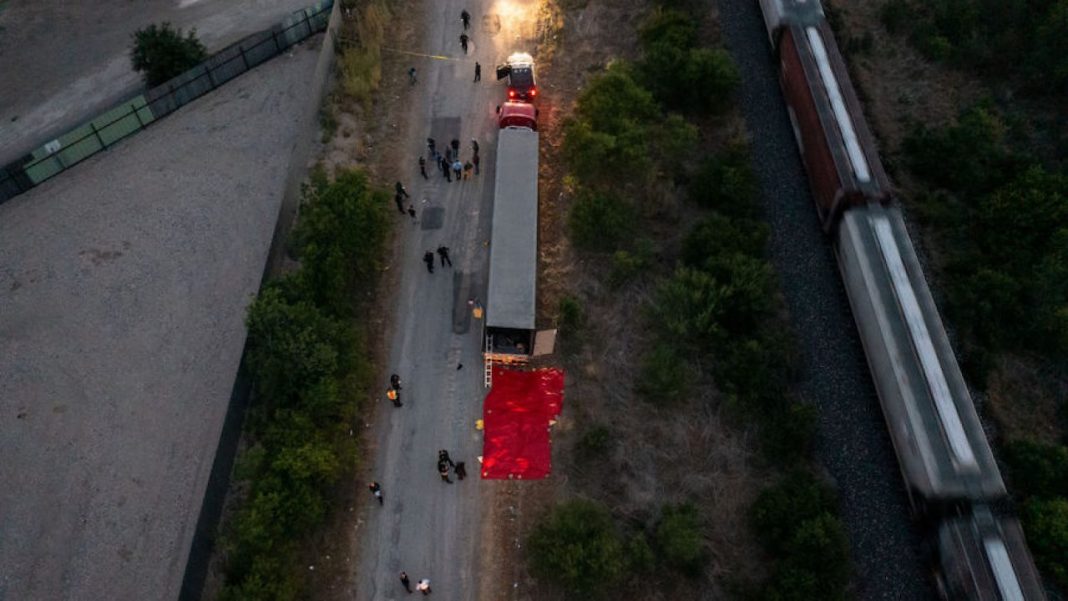 West News Wire: After a suspected smuggling incident in Texas, 46 people were discovered dead inside a tractor-trailer.

Officials announced that three people are in custody and that this is now a federal investigation.

A spokesperson for Immigration and Customs Enforcement told news reporters that Homeland Security Investigations (HSI) responded to a call about an alleged human smuggling incident on Monday and confirmed the deaths of more than 40 people when they arrived at the scene.

In a tweet, Abbott said Monday evening’s discovery rests squarely on Biden. “At Least 42 People Found Dead Inside Truck Carrying Migrants In Texas. These deaths are on Biden,” Abbott said, before officials raised the death count to at least 46.

The Republican governor also criticized Biden for not doing enough to secure the southern border.

“They are a result of his deadly open border policies. They show the deadly consequences of his refusal to enforce the law,” Abbott added.

Several other officials blamed the incident on Biden’s immigration policies, including Texas Sen. Ted Cruz, who called the discovery “horrific” and “wrong.”

“How many more people have to die before Dems give a da?” he asked, before making a reference to Biden’s border crisis.

Rep. Tony Gonzales, a Republican who represents Texas, also tweeted about the incident.

“Today in San Antonio it was 102 degrees. Imagine being abandoned inside an 18-wheeler left to die 42 people died today will @AliMayorkas even mention their names?” the lawmaker said, referencing Alejandro Mayorkas, who was nominated by Biden to lead the U.S. Secretary of Homeland Security.

“HSI keeps up its enforcement efforts to make sure our communities are safe and healthy. The ICE spokesperson stated, “We will continue to address the grave threat to public safety posed by human smuggling organizations and their careless disregard for the health and safety of those smuggled. “To report suspicious activity, we encourage people to call the HSI Tip Line at 1-866-DHS-2ICE. All calls are kept confidential.”

Customs and Border Protection Commissioner Chris Magnus said he was “horrified” by the incident.

“Horrified at this tragic loss of life near San Antonio,” Magnus said in response to the news. “This speaks to the desperation of migrants who would put their lives in the hands of callous human smugglers who show no regard for human life.”

CBP is the umbrella agency of the U.S. Border Patrol, which responded to assist at the scene and is supporting ICE in the federal investigation.

“We will be working with our federal, state and local partners to assist in every way possible with this investigation,” Magnus said.

Homeland Security Secretary Alejandro Mayorkas tweeted that he was “heartbroken by the tragic loss of life today and am praying for those still fighting for their lives.”

“Far too many lives have been lost as individuals including families, women, and children take this dangerous journey,” he wrote, adding: “Human smugglers are callous individuals who have no regard for the vulnerable people they exploit and endanger in order to make a profit. We will work alongside our partners to hold those responsible for this tragedy accountable and continue to take action to disrupt smuggling networks.”

Earlier this month, the Department of Homeland Security (DHS) released more details on the Biden administration’s efforts to combat human smuggling and unauthorized migration in conjunction with the Summit of the Americas held in Los Angeles.