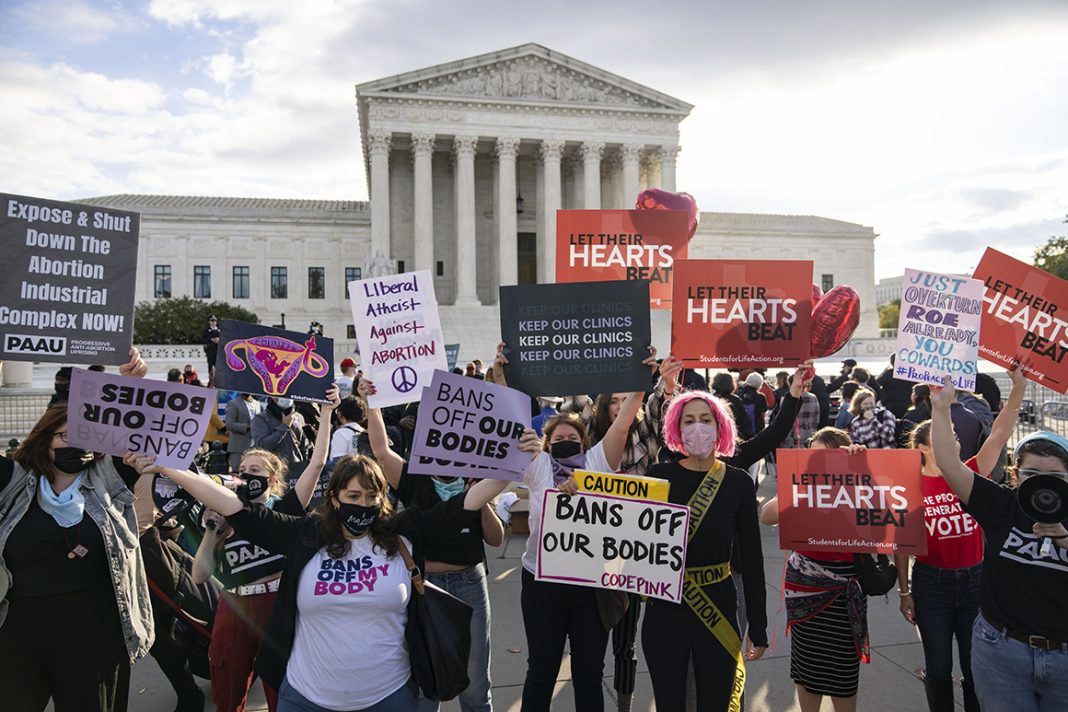 West News Wire: As abortion opponents sought to swiftly enact statewide bans and the other side sought to buy more time, the fight over abortion moved to courthouses across the nation on Monday with the demise of Roe v. Wade.

After deciding on Friday to end constitutional protections for abortion, the U.S. Supreme Court opened the door to a flurry of lawsuits from all sides.

Numerous court cases will center on “trigger laws,” which were passed in 13 states ahead of the decision and are intended to go into effect right away. Old anti-abortion laws that were not enforced after Roe could also be the target of lawsuits, and cases involving abortion restrictions that were put on hold while waiting for the Supreme Court’s decision have begun to resurface.

“We’ll be back in court tomorrow and the next day and the next day,” Nancy Northup, president and CEO of the Center for Reproductive Rights, which argued the case that resulted in Supreme Court ruling, told reporters in a video call Friday.

On Monday, abortion rights advocates asked a Florida judge to block a new state law, which bans abortions after 15 weeks with some exceptions and is set to take effect this week. Attorneys hoping to stave off a ban on abortion in Louisiana filed a lawsuit arguing state laws are unclear on when a ban can take effect and what constitutes an exception.

The American Civil Liberties Union of Arizona and an abortion-rights group filed an emergency motion Saturday seeking to block a 2021 law that they worry can be used to halt all abortions. The Planned Parenthood Association of Utah has already challenged a trigger law with narrow exceptions.

Brigitte Amiri, deputy director of the American Civil Liberties Union’s Reproductive Freedom Project, said the organization is looking at “all options” to protect access to abortion. As of Saturday, abortion services had stopped in at least 11 states either because of state laws or confusion over them.

But in some cases, the lawsuits may only be a play for time. Even if courts block some abortion bans or restrictions from taking hold, lawmakers in many conservative state could move quickly to address any flaws cited.

That’s likely to be the case in Louisiana. The state’s Republican attorney general, Jeff Landry, took to Twitter on Friday to say bans with “trigger” provisions passed in anticipation of the ruling were immediately in effect. The only three clinics providing abortions in the state closed that day.

The plaintiffs in the lawsuit filed Monday in state court in New Orleans including one of those clinics don’t deny that Louisiana can now ban abortion. Instead, they contend current laws are confusing and unconstitutionally vague, according to the legal brief.

Days before Friday’s Supreme Court decision, Gov. John Bel Edwards, an anti-abortion Democrat, signed a measure into law that supporters said would clarify and eliminate any conflicts in anti-abortion laws already in state statutes. The sweeping bill includes prison terms of up to 10 years for any doctor who performs an abortion.

Still other cases could be filed as states try to sort out whether abortion bans in place before Roe was decided sometimes referred to as “zombie laws” apply now that there is no federal protection for abortion.

For instance, Wisconsin passed a law in 1849 banning abortions except to save the life of the mother. Attorney General Josh Kaul, a Democrat, said he does not believe it’s enforceable. Pro-Life Wisconsin and other abortion opponents have called on lawmakers to impose a new ban.

In the meantime, Planned Parenthood of Wisconsin said it immediately suspended all abortions, though the district attorneys in the counties that include Madison and Milwaukee have both suggested that they would not enforce the ban.