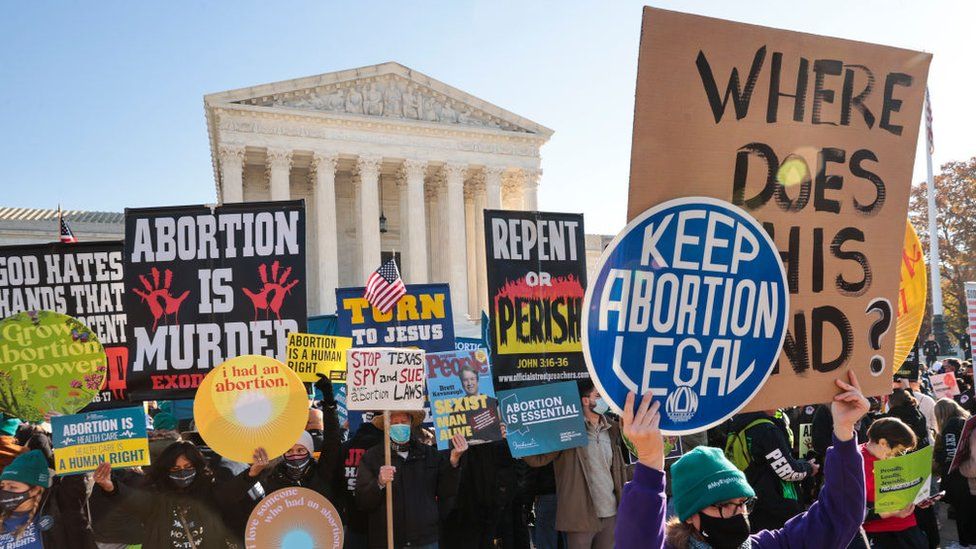 West News Wire: On Friday, the Supreme Court overturned long-standing constitutional restrictions on abortion in the United States. The Roe v. Wade decision was overturned by the court’s conservative majority, which is expected to result in abortion restrictions in about half of the states.

The decision, which was unthinkable only a few years ago, was the result of decades of work by abortion opponents and was made possible by the court’s right side, which has grown more assertive thanks to the addition of three Trump appointees.

Both sides anticipated that the debate over abortion would continue, in state capitals and in Washington, and Justice Clarence Thomas, a member of the majority on Friday, urged the court to reverse other high court decisions protecting same-sex marriage, gay sex, and other forms of sexual orientation.

Abortion foes cheered the ruling, but abortion-rights supporters, including President Joe Biden, expressed dismay and pledged to fight to restore the rights.

“It’s a sad day for the court and for the country,” Biden said at the White House. He urged voters to make it a defining issue in the November elections, declaring, “This decision must not be the final word.”

The ruling came more than a month after the stunning leak of a draft opinion by Justice Samuel Alito indicating the court was prepared to take this momentous step.

It puts the court at odds with a majority of Americans who favored preserving Roe, according to opinion polls.

Alito, in the final opinion issued Friday, wrote that Roe and Planned Parenthood v. Casey, the 1992 decision that reaffirmed the right to abortion, were wrong the days they were decided and must be overturned.

Authority to regulate abortion rests with the political branches, not the courts, Alito wrote.

Four justices would have left Roe and Casey in place.

The vote was 6-3 to uphold the Mississippi law, but Chief Justice John Roberts didn’t join his conservative colleagues in overturning Roe. He wrote that there was no need to overturn the broad precedents to rule in Mississippi’s favor.

Justices Stephen Breyer, Sonia Sotomayor and Elena Kagan  the diminished liberal wing of the court  were in dissent.

“With sorrow for this Court, but more, for the many millions of American women who have today lost a fundamental constitutional protection we dissent,” they wrote, warning that abortion opponents now could pursue a nationwide ban “from the moment of conception and without exceptions for rape or incest.”

The ruling is expected to disproportionately affect minority women who already face limited access to health care, according to statistics analyzed by The Associated Press.

Attorney General Merrick Garland said the Justice Department “will work tirelessly to protect and advance reproductive freedom.” He said in a statement that in addition to protecting providers and those seeking abortions in states where it is legal “we stand ready to work with other arms of the federal government that seek to use their lawful authorities to protect and preserve access to reproductive care.”

In roughly a half-dozen other states, the fight will be over dormant abortion bans that were enacted before Roe was decided in 1973 or new proposals to sharply limit when abortions can be performed, according to Guttmacher.

In Wisconsin, which has an 1849 abortion ban on the books, Planned Parenthood immediately halted all scheduled abortions at its clinics in Madison and Milwaukee following the high court’s ruling.

The decision came against a backdrop of public opinion surveys that find a majority of Americans oppose overturning Roe and handing the question of whether to permit abortion entirely to the states. Polls conducted by The Associated Press-NORC Center for Public Affairs Research and others also have consistently shown about 1 in 10 Americans want abortion to be illegal in all cases. A majority are in favor of abortion being legal in all or most circumstances, but polls indicate many also support restrictions especially later in pregnancy.

The Biden administration and other defenders of abortion rights have warned that a decision overturning Roe also would threaten other high court decisions in favor of gay rights and even potentially, contraception.

The first sign that the court might be receptive to wiping away the constitutional right to abortion came in late summer, when the justices divided 5-4 in allowing Texas to enforce a ban on the procedure at roughly six weeks, before some women even know they are pregnant. That dispute turned on the unique structure of the law, including its enforcement by private citizens rather than by state officials, and how it can be challenged in court.