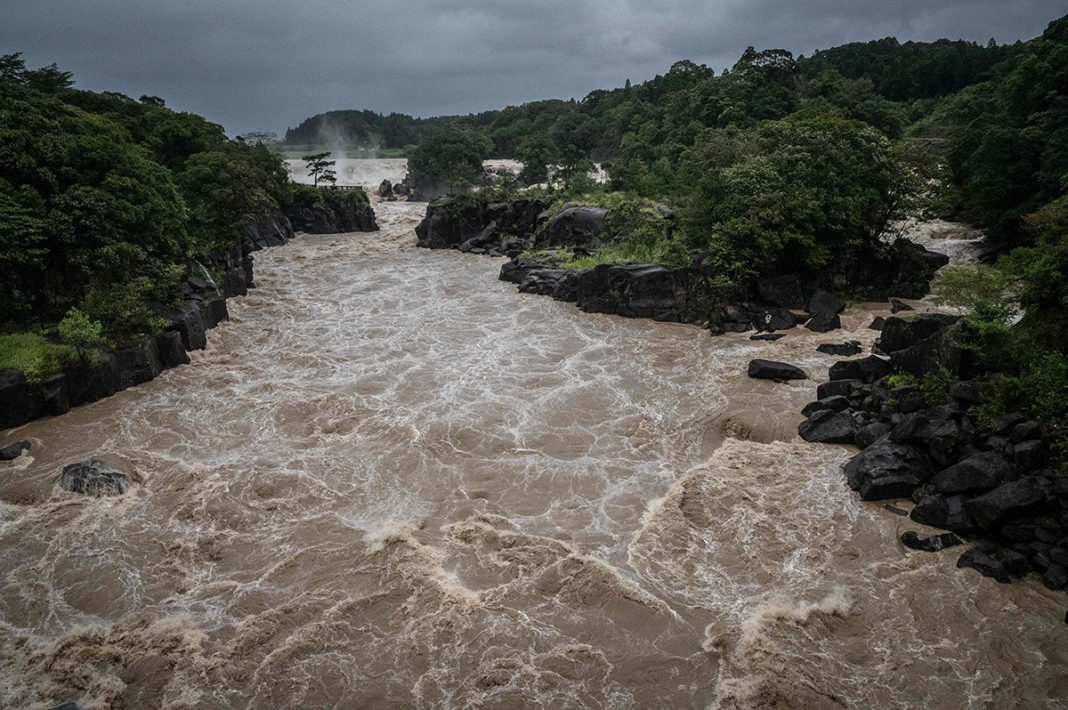 West News Wire: Japan is being pummeled by one of the worst typhoons the country has ever experienced, and nine million people have been ordered to leave their homes.

Nearly 90 people have been injured and two people dead by the super typhoon Nanmadol.

In Sunday morning, it made landfall on Kyushu, the southernmost of Japan’s four major islands, and is expected to soon make landfall on Honshu, the largest island.

Transport and commerce have been hampered, and the nation is preparing for significant flooding and landslides.

Bullet train services, ferries, and hundreds of flights have been cancelled. Many shops and other businesses have closed, and sandbags have been put in place to protect some properties.

The typhoon made landfall near the city of Kagoshima, on the southern tip of Japan’s most southerly island, Kyushu, on Sunday morning.

A river in Kyushu has burst its banks.

State broadcaster NHK said one man was killed when his car was submerged in flooding, and another died after being buried in a landslide. One more person remains missing, and 87 have been injured.

The storm is forecast to turn east and pass over Japan’s main island of Honshu before moving out to sea by Wednesday. The capital, Tokyo, has experienced heavy rain, with the Tozai underground line suspended because of flooding.

A level-five alert, the highest on Japan’s disaster warning scale, has been issued for more than 500,000 people in the Kagoshima, Miyazaki, Oita, Kumamoto and Yamaguchi areas.

A total of around nine million people have been ordered to evacuate parts of the Kyushu, Shikoku and Chugoku regions after a level four alert.

Nanmadol has been categorised as a super typhoon by the US Joint Typhoon Warning Centre (JTWC), a term applied to storms with sustained wind speeds of 240km/h (150mph) or more. It is the equivalent of a category four or five hurricane.

Prime Minister Fumio Kishida has delayed a visit to New York, where he is due to give speech at the UN General Assembly, until Tuesday, to monitor the impact of the storm.

Scientists have predicted a very active hurricane season this year, influenced by a natural phenomenon known as La Niña.

Warmer sea surface temperatures in the Atlantic and Caribbean as a result of climate change may also have an impact.

The Intergovernmental Panel on Climate Change (IPCC) has said intense tropical cyclones will likely increase on a global scale.