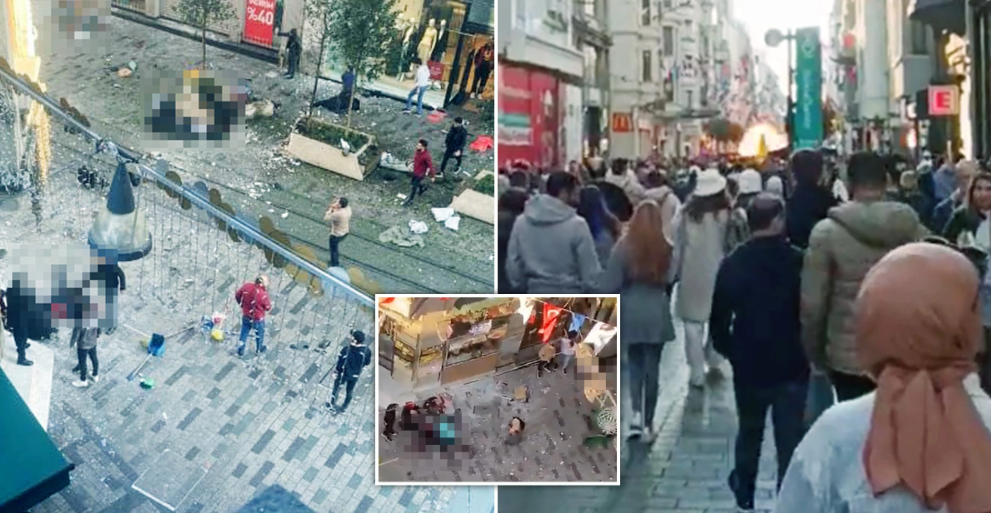 West News Wire: The Turkish port city of Istanbul had a powerful explosion that left several people dead and numerous others injured, according to public footage and Turkish media. The explosion occurred in a crowded place at the center of a busy pedestrian thoroughfare.

In the well-known Istiklal retail strip in the Beyoglu area, which is well-liked by both locals and visitors, the explosion, which was purportedly triggered by a bomb, happened shortly after 4:00 pm (1300 GMT) on Sunday. It is still unclear what caused the explosion.

The explosion in Istanbul has not yet been attributed to any particular group.

Ali Yerlikaya, the governor of Istanbul, reports that four persons have died and 38 others have been injured in the blast. Other reports, however, have put the fatalities at as many as 11 with 15 others injured.

Later in the day, Turkey’s President Recep Tayyip Erdogan condemned the ‘vile attack’ in Istanbul, saying six people had died in the blast.

“Six people were killed four of them were killed at the site, another two died in hospital. According to the latest information from the governor the number of injured is 53,” he told a televised press conference.

“The relevant units of our state are working to find the perpetrators behind this vile attack,” Erdogan added.

The Turkish president noted that initial signs pointed to a ‘terror’ attack in Istanbul.

“It would be wrong to say this is undoubtedly a terrorist attack, but the initial developments and initial intelligence from my governor is that it smells like terrorism. Initial findings show (amidst) people fleeing and so on, a woman has played a in this,” he said.

He also vowed that those who waged terrorism against the Turkish nation would fail.

State broadcaster TRT and other media showed ambulances and police heading to the scene.

The nearby Kasimpasa police station said all crews were at the scene but gave no further details. The area has been evacuated by security forces.

Images of the explosion that were posted to social media at the time showed flames and a loud explosion that could be heard from a distance. The photographs also show multiple bodies on the ground close and a large dark crater.

Istiklal Avenue was impacted by a series of attacks against Istanbul in 2015–2016 that the terrorist organization Daesh Takfiri claimed responsibility for.

Around an hour after the explosion, Turkey’s RTUK regulator issued a broadcast restriction on coverage of it.

“My condolences to those who lost their lives in the explosion on Istiklal Avenue,” Mayor Ekrem Imamoglu said on Twitter.