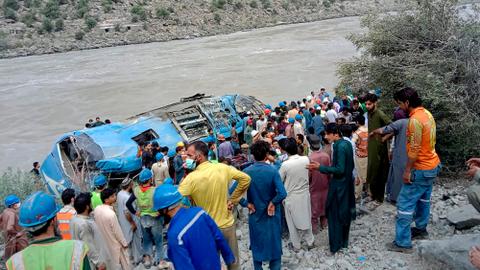 West News Wire: In southwest Pakistan on Sunday, a passenger bus slid off a mountain road and plunged into a deep ravine, killing 19 and injuring 12, according to a government official.

According to Mahtab Shah, assistant administrator for the Baluchistan province’s Shirani district, the bus was carrying about 35 people. He claimed that rescuers were looking for survivors among the debris left by the destroyed car and its surroundings.

According to Shah, it appears that the bus slid on the wet road during a downpour, the driver lost control, and the bus fell about 200 feet (61 meters) into a ravine.

Deadly road accidents are common in Pakistan due to poor road infrastructure and disregard for traffic laws, as well as poorly maintained vehicles. Last month, 22 people were killed in a similar accident when a bus fell into a ravine in Qila Saifullah district.