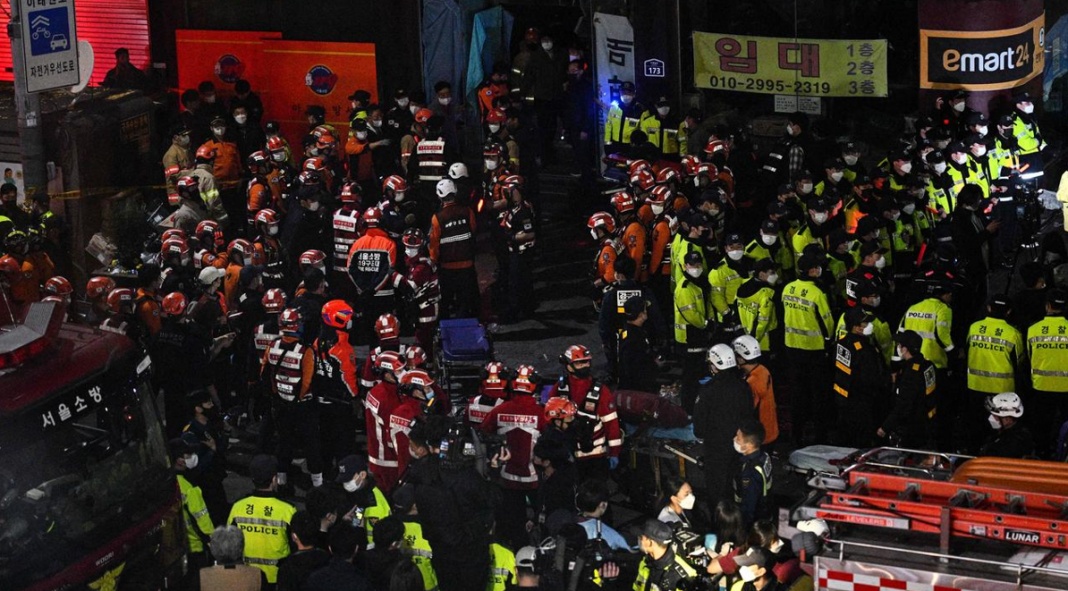 West News Wire: In Seoul, South Korea’s capital, a frenzied stampede has claimed at least 151 lives, largely women and young people in their 20s. The stampede occurred as a result of a large crowd filling a small street during Halloween festivities.

In the mass crush that occurred on Saturday night in Itaewon’s entertainment zone, 82 additional people were harmed, 19 of them badly, according to officials.

According to witnesses, the event took place at around 10:00 p.m. local time (13:00 GMT) when a crowd of individuals invaded a small alley next to the Hamilton Hotel.

Fire official Choi Seong-beom told reporters at the scene on Sunday morning that the large number of casualties was due to numerous people getting crushed during the Halloween event, adding that the death toll could rise.

Many of the victims were women and young people in their 20s, he said.

Nineteen foreigners were also killed, he said. They included people from Iran, Uzbekistan, China and Norway.

Witnesses described chaotic scenes moments before the stampede, with the police on hand in anticipation of the Halloween event at times having trouble maintaining control of the crowds. Some were trapped for more than an hour before being pulled from the crush of people in the alley.

Moon Ju-young, 21, told the Reuters news agency there were clear signs of trouble in the alleys before the incident. “It was at least more than 10 times crowded than usual,” he said.

“There were so many people just being pushed around and I got caught in the crowd and I couldn’t get out at first too,” 30-year-old Jeon Ga-eul told the AFP news agency. “I felt like an accident was bound to happen.”

Police confirmed dozens of people were given cardiopulmonary resuscitation (CPR) on the streets, while others were taken to nearby hospitals.

It was the first Halloween event in Seoul in three years after the country lifted COVID-19 restrictions and social distancing. Many of the partygoers were wearing masks and Halloween costumes.

In an interview with local broadcaster YTN, Lee Beom-suk, a doctor who administered first aid to the victims, described scenes of tragedy and chaos.

“When I first attempted CPR there were two victims lying on the pavement. But the number exploded soon after, outnumbering first responders at the scene,” Lee said. “Many bystanders came to help us with CPR.”

“It’s hard to put in words to describe,” he added. “So many victims’ faces were pale. I could not catch their pulse or breath and many of them had a bloody nose. When I tried CPR, I also pumped blood out of their mouths.”

US President Joe Biden and his wife sent their condolences and wrote: “We grieve with the people of the Republic of Korea and send our best wishes for a quick recovery to all those who were injured.”

British Prime Minister Rishi Sunak tweeted: “All our thoughts are with those currently responding and all South Koreans at this very distressing time.”

The disaster is among the country’s deadliest since a 2014 ferry sinking that killed 304 people, mainly high school students.