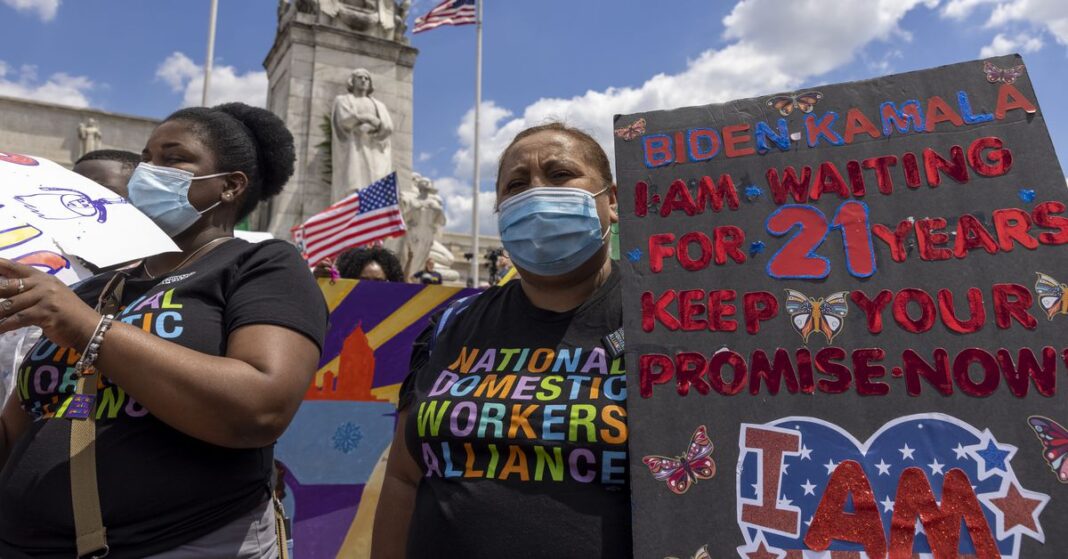 West News Wire: After the Senate parliamentarian rejected their third attempt to include meaningful immigration change in their big social spending plan, Democrats’ ambitions are on life support.

Senate parliamentarian Elizabeth MacDonough said Thursday evening that provisions in President Joe Biden’s proposed Build Back Better Act that would allow some 6.5 million immigrants who have been in the country illegally since 2011 to apply for five-year work permits and protection from deportation ran afoul of the chamber’s rules and could not be included. The measures were included in the House version of the bill, which was enacted earlier this month.

The so-called “Plan C” was perhaps Democrats’ last feasible option to include major immigration provisions in the bill, and the opinion is a devastating blow to lawmakers and advocates who earlier this year were ecstatic at the possibility of passing sweeping reform measures for the first time in decades after years of congressional gridlock on the issue. The plan seemed viable because lawmakers will try to pass the spending measure through a process known as reconciliation, in which budget-related bills only require 51 votes to advance, instead of the 60 typically needed for major legislation to overcome procedural hurdles.

But with hopes now deflated, Democrats now face a choice between several undesirable options: abandon the attempt, weaken the proposed immigration provisions even further and renegotiate with the parliamentarian, or try to convince their colleagues to reject the parliamentarian’s opinions completely – which is within their authority – and push ahead with the inclusion of even more sweeping reforms.

The latter is certain to face resistance from moderate caucus members, including Sen. Joe Manchin of West Virginia, but lawmakers leading the charge on the issue have already indicated that they may attempt to do so anyway.

“We strongly disagree with the Senate parliamentarian’s interpretation of our immigration proposal, and we will pursue every means to achieve a path to citizenship in the Build Back Better Act,” a group of Democrats including Sen. Chuck Schumer of New York, Sen. Dick Durbin of Illinois, Sen. Bob Menendez of New Jersey, Sen. Catherine Cortez Masto of Nevada, Sen. Ben Ray Luján of New Mexico and Sen. Alex Padilla of California said in a statement Thursday.

The statement is notable because Democrats have already attempted to include provisions in the measure that would lead to a path to legal status for millions of immigrants living in the country illegally. Those efforts were rejected by the parliamentarian, and lawmakers chose to whittle down the scope of the provisions in an effort to get McDonough to green-light more narrow reforms.

The spending bill is also likely the last chance for Democrats to pass immigration measures ahead of the 2022 midterms next fall after the party promised voters action on the issue.

Progressive Democrats have signaled a willingness to overrule the parliamentarian and immigration advocacy groups have consistently urged lawmakers to do so.

“The path before us could not be clearer. Senate Democrats must use their power under existing Senate rules to disregard the parliamentarian’s advisory opinion and enact the permanent protections immigrants have fought for and deserve. No more excuses, it’s time to deliver,” Marielena Hincapié, executive director of the National Immigration Law Center, said in a statement following MacDonough’s determination.

Some proponents of an effort to set aside the parliamentarian’s opinion have pointed out that it has been done in the past, including by Republicans: In 2001, for example, GOP senators ousted the then-parliamentarian after a disfavorable ruling in order to pass tax cuts through the reconciliation process.

Under Senate rules regarding reconciliation, provisions in a proposed measure must be directly related to the budget. According to MacDonough’s determination, the “Plan C” immigration provisions included changes that would outweigh their budgetary impact and were “not much different” than previous proposals presented to her.

MacDonough also objected to the Democrats’ proposal because she said it would, as written, not give the government enough power to reject immigrants that might not meet the qualifications. Her ruling did not cover a separate set of provisions aimed at aiding immigrants in green card backlogs.

“Ultimately, it’s time for Congress to stop kicking the can down the road and finally provide certainty and stability to these groups, and make other badly needed reforms to our outdated immigration system,” Psaki said. “As you know, that news just came out last night. And, of course, we would support any effort and mechanism for our partners in Congress to move forward reforms.”

The decision, meanwhile, is a victory for Republicans who have argued that immigration reform has no place in a budget bill – and one they vehemently oppose, at that.

“This guideline reinforces what everyone always understood – that providing amnesty to millions of illegal immigrants isn’t a fiscal topic suited for reconciliation,” Grassley stated. “It’s always been about avoiding bipartisan dialogue and compromise when trying to jam radical immigration policy proposals into reconciliation.”

The decision comes as Democrats express dismay that the bill will not pass before Christmas, as promised, while procedural hurdles and discussions with Manchin and other moderates continue.

With the act’s parameters and ultimate approval still unknown, Biden and Senate Majority Leader Chuck Schumer of New York both hinted this week that legislators will have to strive for a vote in the new year.