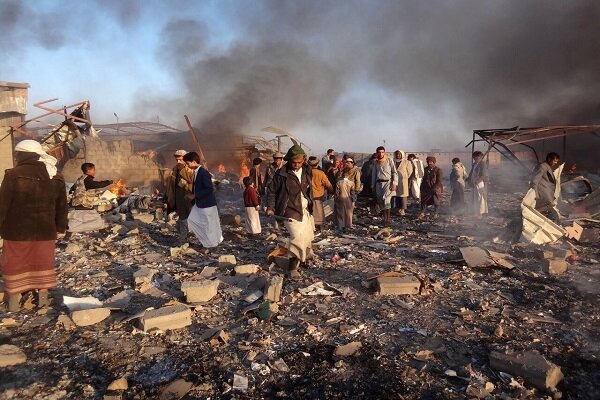 West News Wire: A statewide truce that was negotiated by the UN and went into effect in the war-torn country of Yemen in April has been broken approximately 200 times in the last 24 hours by the Saudi-led coalition forces and its mercenaries.

Unnamed Yemeni military officials made the announcement on Sunday, according to Yemen’s Arabic-language al-Masirah television network, and stated that the violations included 49 flight operations with spy drones and warplanes over the provinces of Ma’rib, Ta’izz, Jawf, Sa’ada, al-Hudaydah, Ad Dali’, al-Bayda and border areas.

According to the source, the US-Saudi mercenaries fired on residences of locals as well as the locations of the Yemeni Army and Popular Committees in the mentioned districts, resulting in 102 breaches.

According to a source provided by the news network, US-Saudi mercenaries carried out six airstrikes on houses of civilians houses in Ma’rib and al-Hudaydah as well as two breaches with military reinforcements in Ta’izz.

As the mercenaries fired artillery shells on the locations of the Yemeni Army and the Popular Committees in Ma’rib, Ta’izz, Hajjah, Sa’ada, al-Hudaydah, and border fronts, the military source added that 35 violations were observed.

The UN-mediated cease-fire between the coalition of aggressors and the widely supported Houthis in Yemen first went into force in April. After that, the cease-fire was twice extended.

Hans Grundberg, the UN’s special envoy for Yemen, stated last month that the extension, which runs from August 2 to October 2, included a pledge from the parties to step up negotiations in order to quickly secure an enlarged truce deal.

Commercial flights have resumed from Yemen’s capital city of Sana’a to Jordan and Egypt in accordance with the terms of the ceasefire, and oil tankers have been able to dock in the lifeline port city of al-Hudaydah.

In accordance with the agreement, the coalition also committed to stop its airstrikes on Yemeni territory and lift the siege it had been imposing on Yemen.

But since then, Yemen has claimed numerous instances of the Saudi-led forces breaking the cease-fire.

The US’s closest regional allies, Saudi Arabia and the United Arab Emirates, along with the Israeli government, have been at war with Yemen since March 2015.

The goal of the invasion has been to oust the Houthis organization and restore the former rulers of the impoverished nation who were sympathetic with Riyadh and Washington to power. None of the coalition’s goals have been attained under Saudi leadership.

Tens of thousands of Yemenis have died in the conflict, which has received unremitting assistance from the United States in the form of armaments, logistics, and political support, and it has caused the biggest humanitarian disaster to ever hit a nation.

However, Yemen’s defense forces, who are made up of the army and its allying Popular Committees, have sworn to keep fighting until the country is fully freed from the scourge of the attack.

UNICEF has issued a warning that millions of people, including children, are at risk of becoming hungry as a result of ongoing hostilities and the deteriorating humanitarian situation in numerous Middle Eastern and North African nations, including Yemen.

According to the study, which was released on August 31, 58 million people, including about 29.5 million children, are at risk of suffering the effects of acute food insecurity in Yemen, Sudan, Lebanon, and Syria, with Yemen topping the list and continuing at the highest levels of alert.

In addition, the research showed a sharp rise in the number of polio cases in Yemen, which poses a serious risk and raises the possibility of a pandemic.

In March 2015, Saudi Arabia began a bloody war on Yemen with support from the US and other regional allies. The war-torn nation was also placed under a blockade by the kingdom that year.

Thousands of people have died throughout the eight years of fighting, and much of the nation’s infrastructure has been devastated. Saudi Arabia and its allies have received arms and logistical help from the US and other Western nations.

By starting the terrible conflict, the Saudi-led coalition not only failed to achieve its goals but also caused the “biggest humanitarian disaster in history,” according to the UN, and murdered hundreds of thousands of Yemenis.