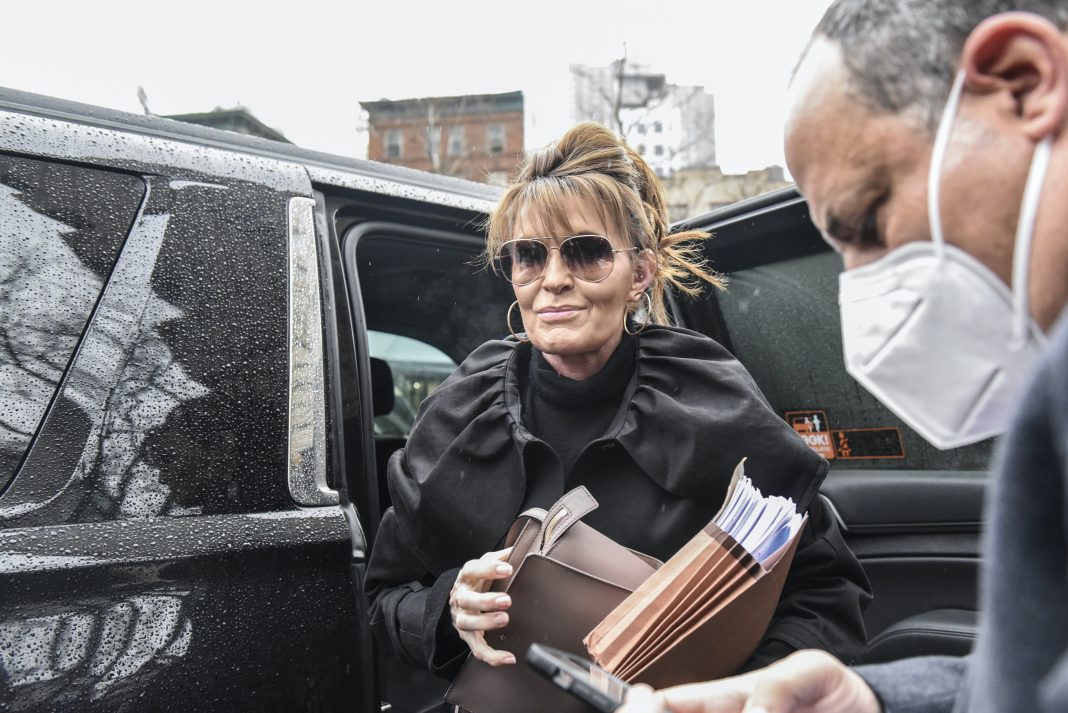 West News Wire: On Tuesday, a jury dismissed former Alaska governor Sarah Palin’s libel lawsuit against The New York Times, dismissing her argument that the newspaper willfully harmed her reputation by incorrectly tying her campaign rhetoric to a mass massacre.

A judge had already said that if the jury found in Palin’s favour, he would overturn the verdict because she hadn’t proven the newspaper behaved deliberately, which is necessary in libel cases involving prominent figures.

“Of course we’re sad,” Palin said as she walked out of the Manhattan courthouse, adding that she hoped there would be an appeal. She also complimented her two attorneys.

“There were three of us versus the monstrous team of The New York Times, and we did well,” she said. “Doing all they can to make sure the little guy has a voice, the underdog can have their say.”

In a statement, the Times called the verdict a “reaffirmation of a fundamental tenet of American law public figures should not be permitted to use libel suits to punish or intimidate news organizations that make, acknowledge and swiftly correct unintentional errors.”

Palin, a onetime Republican vice presidential nominee, sued the newspaper in 2017, claiming it had damaged her career as a political commentator and consultant with an editorial about gun control published after a man opened fire on a congressional baseball team practice in Washington.

U.S. Rep. Steve Scalise, a Louisiana Republican, was wounded in the shooting, committed by a man with a history of anti-GOP activity.

In the editorial, the Times blamed overheated political rhetoric. It likened the shooting to a 2011 massacre in Arizona that left six dead and former U.S. Rep. Gabby Giffords severely wounded, and said Palin’s political action committee had contributed to an atmosphere of violence at the time by circulating a map of electoral districts that put Giffords and 19 other Democrats under stylized crosshairs.

At the trial, Palin cast herself as a victim of biased journalism by a left-leaning, elitist media institution eager to embarrass a pro-gun-rights politician.

“It was devastating to read a false accusation that I had anything to do with murder,” Palin said. “I felt powerless that I was up against Goliath, I was David.”

In closing arguments, Palin lawyer Kenneth Turkel called the editorial an example of how The Times “treated people on the right they don’t agree with. They don’t care. She’s just one of ‘them.’”

In his closing, Times attorney David Axelrod called the case “incredibly important because it’s about freedom of the press.”

It was an uphill battle for Palin. The jury had to decide whether former Times editorial page editor James Bennet acted with “actual malice” against a public figure or with “reckless disregard” for the truth when he inserted the disputed wording into the piece.

With the jury still deliberating, U.S. District Judge Jed Rakoff had informed lawyers on Monday that he would be ruling that Palin had failed to show that the Times had acted out of malice, a finding he predicted was certain to be challenged on appeal. He shared that news with jurors Tuesday after their verdict was read, saying he would now enter a written judgment.

“We’ve reached the same bottom line,” Rakoff said. “But it’s on different grounds you decided the facts, I decided the law.”

One of Palin’s lawyers, Kenneth Turkel, questioned Tuesday why the judge chose to announce his finding before the end of the trial, calling it “premature.” He also said an appeal was likely, “but we’ll have more on that down the road.”

At trial, Bennet testified that he had botched the edit but meant no harm.

“I’ve regretted it pretty much every day since,” he said.

He and other Times staffers testified about the great lengths taken to correct the error the morning after the piece was published. He also said he wanted to apologize to Palin but was prohibited by a Times policy against making personal apologies.

The defense also has asserted the editorial was predominantly about inflammatory political rhetoric and made only a passing reference to Palin’s political committee, which by law is an entity separate from her.

Palin pushed back, saying the PAC “is me.”

A judge had to put off the trial for a week after Palin tested positive for COVID-19. Away from court, she caused a stir by being sighted dining out at an upscale restaurant in Manhattan after testing positive.