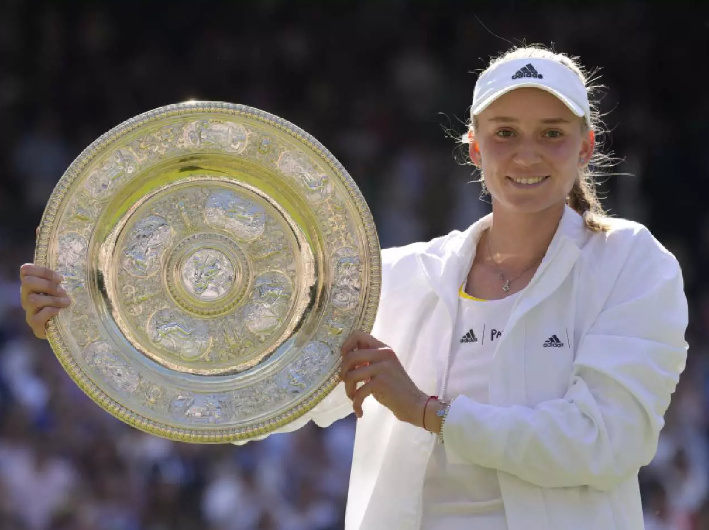 West News Wire: Ons Jabeur of Tunisia’s hopes of becoming the first player from the region to win a grand slam singles title were dashed when she was defeated by Elena Rybakina of Kazakhstan 3-6, 6-2, 6-2 in the Wimbledon final.

The 17th seed, Rybakina, who was born in Russia and has been competing for Kazakhstan since 2018, won her third overall title on Saturday after an hour and 47 minutes on her first match point.

In the professional era, which began in 1968, third-seed Jabeur wanted to become the first person from the Arab world and the first female from Africa to win a Slam singles title.

After a remarkable comeback, the 23-year-old Rybakina was given the Venus Rosewater Dish by the Duchess of Kent.

Rybakina said, speaking in the direction of Jabeur: “I want to thank Ons for the great match and everything you achieved. I think you are an inspiration for everybody. You have an amazing game, it was a joy to play against you and I learned so much today.

Jabeur leads the women’s tour with 13 victories in three-setters this season, but Rybakina came out far stronger in the decider on Saturday.

Jabeur also was participating in her first Grand Slam final.

“She deserved this. Hopefully, next time will be mine,” said Jabeur, whose exuberance on the court and personality off it have earned her the sobriquet “Minister of Happiness”.

“I love this tournament. I feel really sad but in tennis, there is only one winner. I’m trying to inspire people from my country. I hope they are listening,” she said.

Jabeur, 27, had the better start and won seven points in a row as she broke in the third game en route to a 3-1 lead and then went one set up with another eight unanswered points in the final two games.

But Rybakina converted her first break point in the opening game of the second set, saved four break points in her next two service games, and levelled the sets two games later with an ace.

Rybakina kept up the momentum and broke Jabeur again at the start of the decider with a volley winner.

She then fought from 0-40 down on her serve to hold for 4-2 with five unanswered points en route to victory two games later.

Jabeur finished with 24 unforced errors after a mere six in the first set while Rybakina’s more risky game saw her compile 33 unforced errors but also 29 winners, 12 more than her competitor.