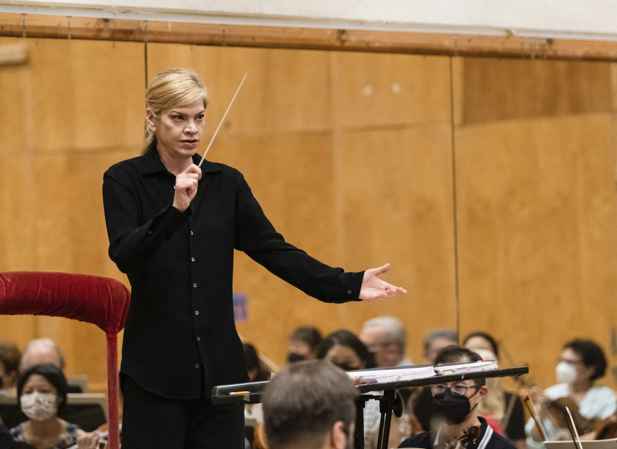 West News Wire: Conductor Keri-Lynn Wilson has had a busy year, starting an orchestra from scratch, taking it on a 12-city tour, and then immediately heading to the Metropolitan Opera to get ready for her opening-week debut.

The Ukrainian Freedom Orchestra, an ensemble created as a musical protest against Vladimir Putin’s invasion of Ukraine, was shaped by her hands.

Wilson, whose mother’s side great-grandparents were from Ukraine, remembers being in Europe when the assault started in February.

Three weeks later, she claimed, “I was scheduled to conduct in Odessa, but instead I met Peter in London.” “And I just kept crying and saying that we needed to take action, and that’s when the tour was born.”

Peter is Peter Gelb, Wilson’s husband and the Met’s general manager. He contacted the head of the Polish National Opera, and together they arranged funding and tour dates for the new orchestra.

Quickly, Wilson assembled a group of 75 Ukrainian musicians, some of them recent refugees, some members of European orchestras, and others still living in their embattled country.

“It was a select group, but really quite raw,” she said. “And a lot of them hadn’t been playing for months. They were maybe relocating, desperately trying to find homes, jobs in other countries. And coming out of COVID.”

With only 10 days to rehearse together in Warsaw before launching the tour, Wilson recalled, “The first day was quite rough, and we just played Dvořák’s ‘New World Symphony.’ The second day, after seven hours I was astonished. And by the fourth day, the Dvořák just rocked.”

The tour hit 10 European cities plus New York and Washington, gathering glowing reviews with programs that included, in addition to the Dvořák, a symphony by Ukrainian composer Valentin Silvestrov, works by Brahms and Chopin, and two operatic arias sung by Ukrainian soprano Liudmyla Monastyrska.

Read More
Hollywood bans releases in Russia, including 'The Batman'

Because of the orchestra’s unique political mission, no Russian music was included in those concerts. But Wilson strongly opposes any suggestion that Russian composers are somehow tainted by Putin’s aggression.

“There has never been any doubt in my mind that we can’t hold literature or Russian culture hostage,” she said.

Where she draws the line, however, is working with artists who support the current regime. Thus, when she was engaged to conduct a run of Puccini’s “Tosca” later this fall in Buenos Aires, she noted that Russian soprano Anna Netrebko who has been barred from the Met and other houses for refusing to distance herself from Putin was listed to sing two of the performances.

“I said, ‘I’m sorry, I can’t perform with Ms. Netrebko,’ and they said, ‘Don’t worry, she’s bringing her own conductor.’ So it was fine. Fortunately, I have all the rehearsals. She’s just stepping in in the middle.”

The opera that has brought her to the Met for the first time is a 20th century Russian masterpiece, Dmitri Shostakovich’s “Lady Macbeth of Mtsensk.” In it, the 26-year-old composer set a sordid tale of rape, murder and betrayal to a raucous, dissonant score that puts extreme demands on players and singers alike.

“For me, it’s a perfect piece to make my debut,” said Wilson, who had previously conducted the opera in Tel Aviv and Zurich. “I’ve had a love affair with Russia since I was a child… and this opera is just a tour de force for a conductor. It’s a piece where I can really show my stuff.”