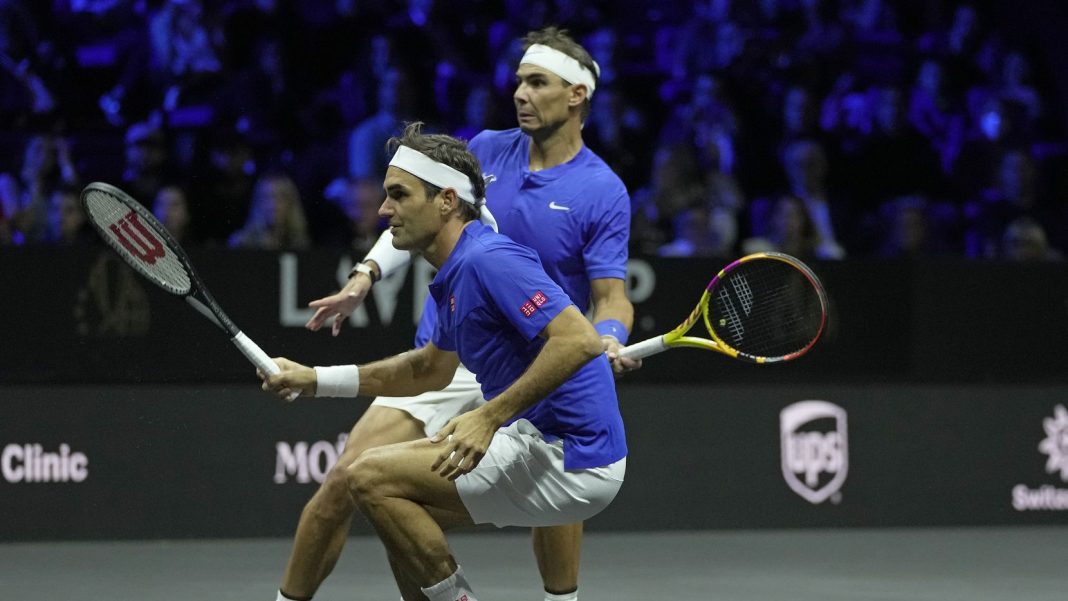 West News Wire: At the age of 41, Roger Federer ended his illustrious professional tennis career with a loss in doubles along with old foe Rafael Nadal at the Laver Cup.

At the O2 Arena in London on Friday, Team Europe’s Federer and Nadal were defeated 4-6, 7-6 (2), 11-9 by Frances Tiafoe and Jack Sock of Team World, who had won the most Grand Slam tournaments with 22 wins.

Federer made his comeback after more than a year away in front of a 17,500-person capacity audience at the O2 for a final dance alongside his great opponent on an exciting and unforgettable finish by the Thames.

He hadn’t played since losing in the Wimbledon quarterfinals in July 2021 until last Friday. Shortly after that, the Swiss star had a third operation on his right knee.

It was poetic that Federer would close things out by sharing a court with Nadal, who was often an on-court nemesis but became an off-court friend.

With the clock already well past midnight (23:00 GMT), Federer had the chance to seal victory in the doubles clash when he served at match point in a tense deciding tiebreak but it was not to be as Americans Sock and Tiafoe ruined the script.

After a brief moment of almost silence around the packed arena, the crowd erupted to salute an emotional Federer.

Even Federer’s practice sessions at the O2 were standing room only affairs and an electric atmosphere greeted him as he walked out into the cavernous arena alongside Nadal just after 10pm local time (21:00 GMT) for what would be his last dance.

Read More
Rafael Nadal: 'I don't know when I'll be back.'

“I’ve done this thousands of times, but this one feels different. Thank you to everybody who’s coming tonight,” Federer had posted on Twitter earlier in the day.

Before Federer, the men’s mark for most major tennis championships was 14 by Pete Sampras. Federer blew past that, accumulating eight at Wimbledon, six at the Australian Open, five at the US Open and one at the French Open.

His substantial resume includes 103 career singles trophies in all, 310 weeks at number one in the ATP rankings, a Davis Cup title and Olympic medals.

Beyond his elegance and effectiveness on court, Federer was seen as a statesman for tennis, someone whose immense popularity helped drive fans to the sport.