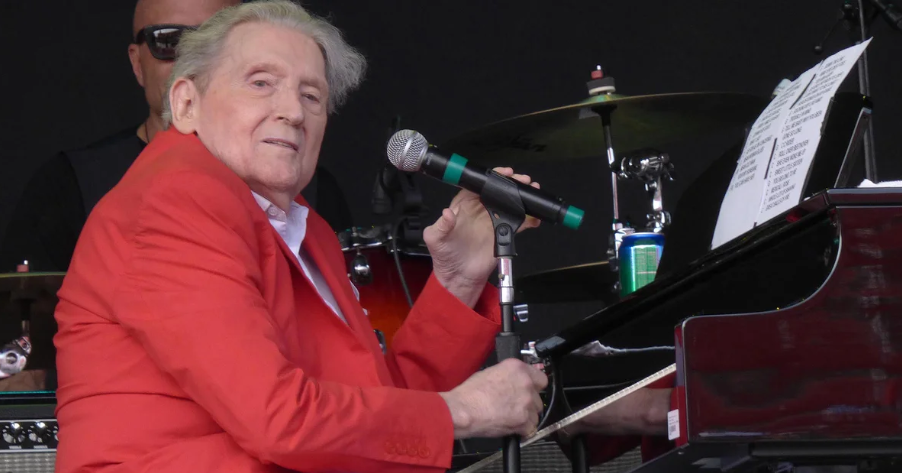 West News Wire: Jerry Lee Lewis, the unstoppable pioneer of rock ‘n’ roll, passed away on Friday morning at the age of 87. His career was otherwise derailed by personal scandal due to his outrageous talent, energy, and ego, which collided on such classic records as “Great Balls of Fire” and “Whole Lotta Shakin’ Goin’ On.”

Lewis passed away at his Mississippi home, south of Memphis, Tennessee, according to a release from his agent Zach Farnum. Lewis was the last surviving member of a group of ground-breaking musicians that also included Elvis Presley, Chuck Berry, and Little Richard. The news was released two days after a false TMZ report later retract­ed that said he had passed away.

Few rock rebels of the 1950s were able to portray the allure and danger of the new music as vividly as the Louisiana-born pianist known as “The Killer.”

Tender ballads were best left to the old folks. Lewis was all about lust and gratification, with his leering tenor and demanding asides, violent tempos and brash glissandi, cocky sneer and crazy blond hair. He was a one-man stampede who made the fans scream and the keyboards swear, his live act so combustible that during a 1957 performance of “Whole Lotta Shakin’ Goin’ On” on “The Steve Allen Show,” chairs were thrown at him like buckets of water on an inferno.

“There was rockabilly. There was Elvis. But there was no pure rock ‘n ‘roll before Jerry Lee Lewis kicked in the door,” a Lewis admirer once observed. That admirer was Jerry Lee Lewis.

But in his private life, he raged in ways that might have ended his career today and nearly did back then.

For a brief time, in 1958, he was a contender to replace Presley as rock’s prime hit maker after Elvis was drafted into the Army. But while Lewis toured in England, the press learned three damaging things: He was married to 13-year-old (possibly even 12-year-old) Myra Gale Brown, she was his cousin, and he was still married to his previous wife. His tour was canceled, he was blacklisted from the radio and his earnings dropped overnight to virtually nothing.

“I probably would have rearranged my life a little bit different, but I never did hide anything from people,” Lewis told the Wall Street Journal in 2014 when asked about the marriage. “I just went on with my life as usual.”

Lewis married seven times, and was rarely far from trouble or death. His fourth wife, Jaren Elizabeth Gunn Pate, drowned in a swimming pool in 1982 while suing for divorce. His fifth wife, Shawn Stephens, 23 years his junior, died of an apparent drug overdose in 1983. Within a year, Lewis had married Kerrie McCarver, then 21. She filed for divorce in 1986, accusing him of physical abuse and infidelity. He countersued, but both petitions eventually were dropped. They finally divorced in 2005 after several years of separation. The couple had one child, Jerry Lee III.

Another son by a previous marriage, Steve Allen Lewis, 3, drowned in a swimming pool in 1962, and son Jerry Lee Jr. died in a traffic accident at 19 in 1973. Lewis also had two daughters, Phoebe and Lori Leigh, and is survived by his wife Judith.

His finances were also chaotic. Lewis made millions, but he liked his money in cash and ended up owing hundreds of thousands of dollars to the Internal Revenue Service. When he began welcoming tourists in 1994 to his longtime residence near Nesbit, Mississippi complete with a piano-shaped swimming pool he set up a 900 phone number fans could call for a recorded message at $2.75 a minute.