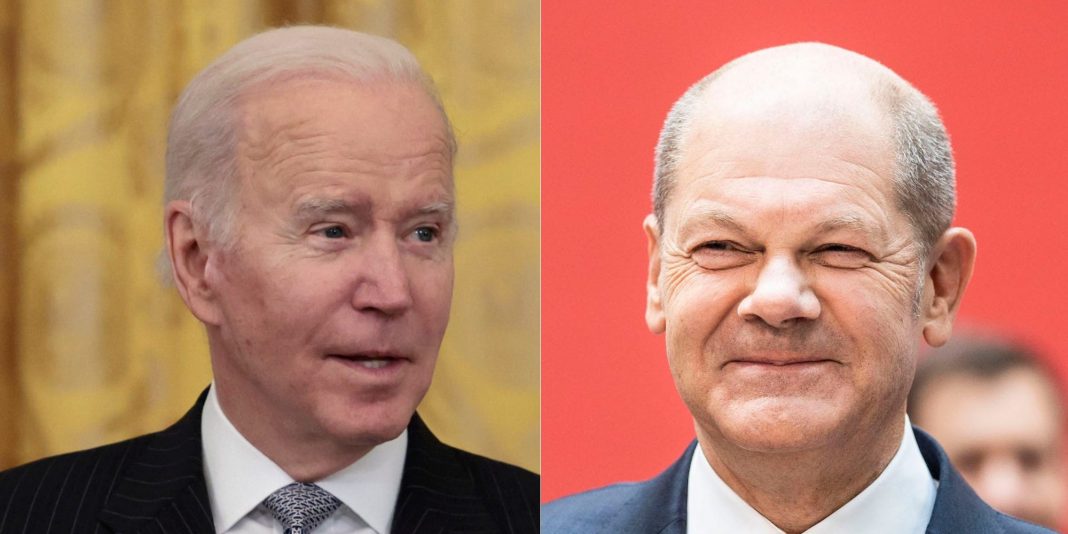 West News Wire: President Joe Biden will welcome German Chancellor Olaf Scholz to the White House on Monday, at a critical juncture in the leaders’ relationship with Russia.

While the Biden administration has been warning Russia for weeks that it will face “serious” consequences if it invades Ukraine, Germany has frequently opted for a milder reaction, refusing to supply military equipment to Ukraine or deploy more troops to the eastern flank. Germany has also expressed reservations about shutting down Nord Stream 2, a Russian gas pipeline that will transport gas directly to Germany, avoiding Ukraine.

Meanwhile, Biden has rallied European allies to respond to Russia’s threats in accordance with his more forceful strategy. When Biden meets with Scholz on Monday, he will be hoping for Scholz to display unity with the administration.

On Nord Stream 2, in particular, a senior Biden administration official was blunt.

“We have made our position very clear, which is that if Russia invades Ukraine in one way or another, Nord Stream 2 will not move forward,” the official said on a briefing call with reporters.

While the official acknowledged “the narrative that’s been out there” that Germany’s response to Russia has been lacking, they were not outright critical of Scholz’s hesitations thus far. But they declined to say whether U.S. officials have already convinced the Germans to get on board with the plan to block Nord Stream 2 entirely if Russian President Vladimir Putin decides to move.

“We’re confident that the Germans share our concerns with Russian aggression, that they’re very involved in our ongoing efforts on both deterrence and diplomacy,” the official said. “What I can say is that we will continue to work very closely with Germany to ensure the pipeline does not move forward.”

When asked if the administration is working on ways to prevent the Nord Stream pipeline from becoming operational regardless of if Russia invades, the official underscored the U.S. opposition to the project overall.

“There is not currently any gas flowing through the pipeline. And there won’t be any gas for months, in part because of the diplomacy that the United States has been able to do on this issue with Germany,” the official noted.

Putin now has 70% of the troops necessary to possibly launch a full-scale attack on Ukraine in place along the Ukrainian border. With U.S. intelligence indicating Putin is preparing for a large-scale invasion, the senior administration official said key allies like Germany are being kept aware of the situation.

“I absolutely think that our countries are unified in terms of awareness of the risk of further Russian aggression to Ukraine. We have been for a long time sharing intelligence with Germany with the rest of our allies,” the official said. “And I think there is absolutely absolute agreement, that if there is further Russian aggression, that there’s a number of things that need to be done in terms of deployment of additional troops to the eastern flank, and to the imposition of a large package of economic sanctions.”

Scholz’s visit will come almost two months to the day since he took office, highlighting the importance of the U.S.-German relationship.

Biden first met with Scholz in October at the G-2 summit, when former Chancellor Angela Merkel invited the then-finance minister to accompany her to her meeting with Biden, giving the leaders a chance to meet ahead of Scholz taking the helm.