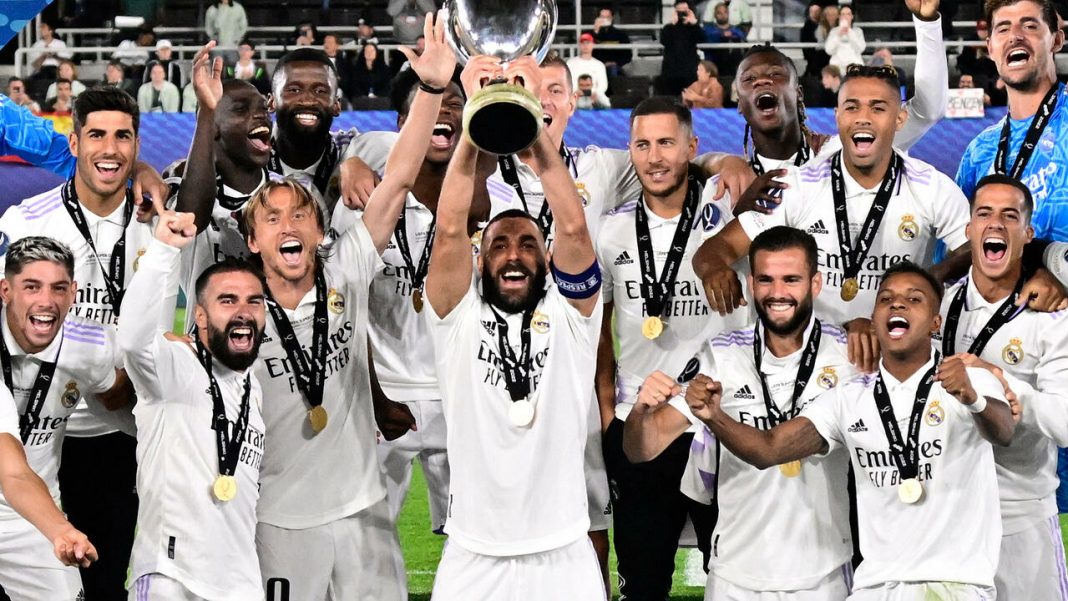 The Spanish squad won the championship thanks to goals from David Alaba in the first half and Karim Benzema in the 65th, which moved him up to second on Real’s all-time scoring list with 324 goals.

The victor of the Europa League, Eintracht, had multiple chances to score in the first half but ultimately fell to the Spanish.

Real’s fifth victory in the opening match of the European season in the Finnish capital brought them even with AC Milan and Barcelona.

Real’s Carlo Ancelotti became the most decorated coach in the event with now four titles, one more than Pep Guardiola, and also moved one ahead of the Spaniard with now five titles as coach and player.

“We had difficulties at the beginning. But we didn’t lose patience and were in control after the first goal,” Ancelotti told streaming portal DAZN.

“We have a lot of confidence. We weren’t spectacular but solid. We can find the right opportunities to be efficient up front.”

Ancelotti fielded the same starting 11 that beat Liverpool in the Champions League final, and Frankfurt coach Oliver Glasner had 10 of his starters from the Europa League win over Rangers.

The Germans seemed well-recovered from a 6-1 Bundesliga humiliation against Bayern Munich last week and also not bothered by losing their only previous meeting with Real 7-3 in the 1960 European Cup final.

But Real were in the game soon when May match-winner Vinicius Junior had a glorious opportunity cleared on the goal line by defender Tuta and a shot saved by Frankfurt goalkeeper Kevin Trapp.

Real came third time lucky on the ensuing corner kick when Alaba opened the scoring in the 37th after Casemiro kept the ball in play off Karim Benzema’s header.

Trapp made another big save from Vinicius Junior in the 55th, Casemiro hit the top of the bar six minutes later, and Real finally got a deserved second when Benzema fired into the bottom left corner off the lively Vinicius Junior.