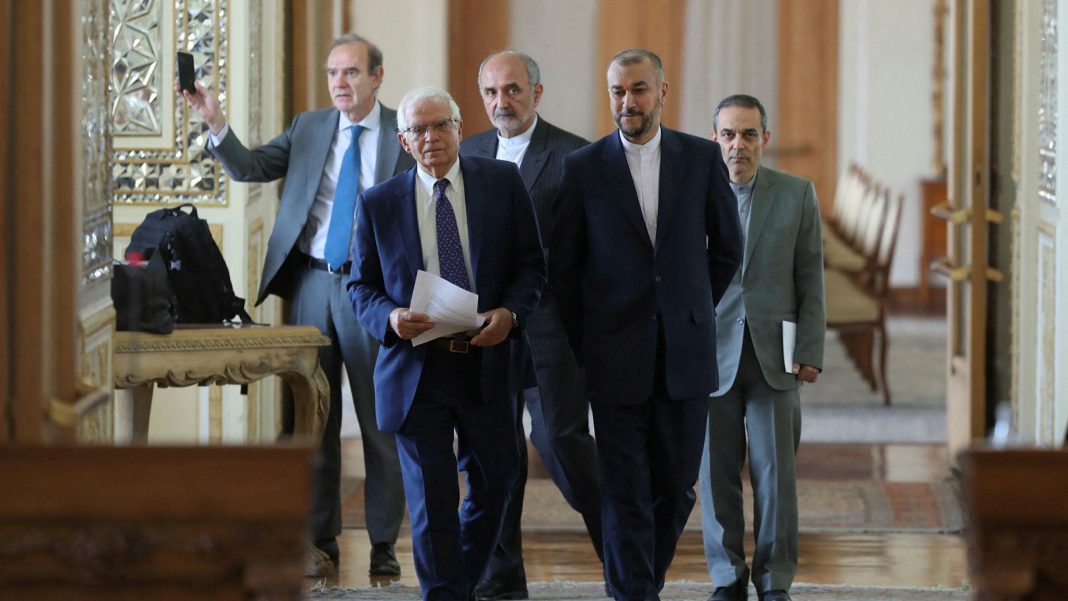 West News Wire: Tehran is prepared to pick up the stalled negotiations with the P4+1 group of nations in Vienna, according to Iranian Foreign Minister Hossein Amir-Abdollahian, in order to revive the 2015 agreement that the US pulled out of in defiance of international criticism.

In an effort to resolve a standoff between the parties to the deal, officially known as the Joint Comprehensive Plan of Action (JCPOA), over its revival and the lifting of sanctions against Iran, Amir-Abdollahian and Josep Borrell gave a press conference together in Tehran on Saturday.

He expressed optimism that “this time” the US would act responsibly and pursue a “realistic and fair approach.”

Iranian officials do not directly negotiate with Americans as the United States unilaterally withdrew from the deal in 2018 and re-imposed sanctions against Iran. During the talks in Vienna, which have been on hold since mid-March, US negotiators communicated with Iranians through European intermediaries.

Pointing to his recent phone call with Borrell, Iran’s foreign minister said the country “always welcomes the path of diplomacy” and “result-oriented talks.”

“What is important for the Iran is that it should completely enjoy all the economic benefits [stipulated] in the 2015 agreement,” Amir-Abdollahian said, emphasizing that the country would not accept anything that would possibly affect the issue.

Negotiations have been held in the Austrian capital of Vienna since April last year to restore the JCPOA, which was ditched by former President Donald Trump in May 2018.

In quitting the agreement, Trump unleashed what he called the “maximum pressure” campaign to bring Iran to its knees. Tehran maintains that the policy has failed dismally. The Biden administration agrees, yet it has not taken any tangible steps to deliver on its promise of repealing the policy.

In recent months, Iran has cited Washington’s indecisiveness as the reason behind the protraction of the talks, as a number of key issues remain unresolved, ranging from the removal of all post-JCPOA sanctions to the provision of guarantees by the American side that it will not leave the deal again.

Meanwhile, in a recent politically-motivated decision backed by Israel, the International Atomic Energy Agency (IAEA)’s Board of Governors passed a resolution, proposed by the US and the three European parties to the JCPOA – Britain, France, and Germany, accusing Tehran of failing to fully cooperate with the UN nuclear agency.

Head of the Atomic Energy Organization of Iran (AEOI) Mohammad Eslami has slammed the UN nuclear agency for politicizing the country’s peaceful nuclear program under the Israeli regime’s pressure regardless of Tehran’s extensive cooperation with the IAEA.

Eslami said Iran did not expect at all that such a resolution would be passed under the influence and political pressure of the Israeli regime.

The Iranian foreign minister further said he held “long but positive” discussions with Borrell on comprehensive cooperation between Iran and the EU, emphasizing, “Iran seeks balanced relations in [its] foreign policy with the world. The European continent has an important position for us.”

He expressed hope that Iran and European states would witness the improvement of relations in light of bilateral talks and the continuation of discussions with Borrell.

For his part, Borrell stated that discussions about reviving the JCPOA would start up again soon.

“In the upcoming days, it is anticipated that we will pick up again and find a solution. We must expedite the work since it has been three months. The decision made in Tehran and Washington has made me very happy “said the top EU diplomat.

In an effort to “solve the last outstanding issues,” he stated that the talks will resume “quickly” and “immediately.”

In order to allay the concerns of the international community regarding non-proliferation, he continued, any agreement with Iran should guarantee that Tehran will receive “full benefits, full economic benefits of the agreement.”

The two-hour meeting with the head of the EU’s foreign policy with the Iranian foreign minister.