wnw24
Home Sport Rafael Nadal: ‘I don’t know when I’ll be back.’ 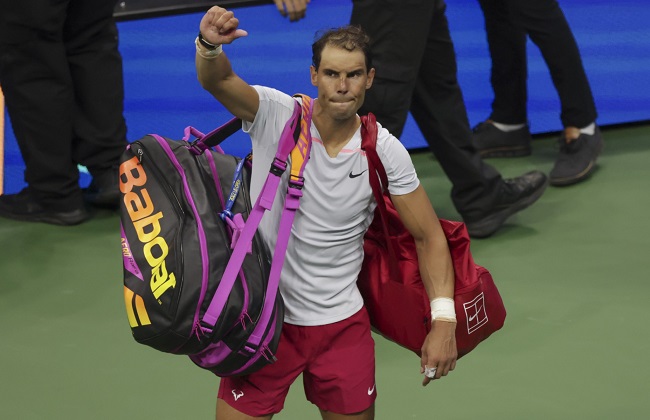 West News Wire: After being eliminated from the US Open by Frances Tiafoe on Sunday, Rafael Nadal revealed on Monday that he was unsure of when he would play again.

On Arthur Ashe Stadium, the American’s free-swinging performance produced 18 aces and 49 winners that soared past a lethargic Nadal.

After being forced to withdraw from his Wimbledon semifinal due to an abdominal ailment, Nadal, the winner of the Australian and French Opens, suffered his first Grand Slam loss of 2022.

The Spaniard’s streak of 16 straight Slam appearances in the quarterfinals came to an end with the loss.

“I need to go back. I need to fix things. I don’t know when I going to come back,” Nadal told a press conference.

“I going to try to be ready mentally. When I feel that I will be ready to compete again, I will be there.”

Nadal has endured a rollercoaster year.

His two Slam titles have taken him one clear of Novak Djokovic but his physical frailties have also returned to haunt him.

Nadal suffered a stress fracture of the ribs in March before requiring daily pain-killing injections in his left foot to see him through to a 14th French Open title in June.

Then his bid for a third Wimbledon crown was shattered by an abdominal injury.

Nadal is due to become a father for the first time in the coming weeks, a factor which will factor heavily into his future on-court plans.

“Now I have to go home, I have more important things than tennis to attend to,” he said.

“Decisions will be made based on how everything goes in my personal life, which comes before my professional life.”

He added: “It’s been a bit difficult for a few months but I want to finish the year with something very important that is my first child.”

Nadal is scheduled to return to action at the Laver Cup in London from September 23. He has already qualified for the ATP Tour Finals in Turin to be staged in November.

Despite his doubts over his future plans, Nadal told Spanish media that he won’t rule out playing again this year.

“I will do a mini pre-season to finish the year in Europe with good feelings and that is what we are going to try. There is a tournament ahead if everything else goes well,” he said.

Tiafoe is Nadal’s junior by 12 years and on Monday, the Spaniard admitted that age is becoming a factor.

“I was not able to push him back. Tennis is a sport of position a lot of times,” he added.

“If not, you need to be very, very quick and very young. I am not in that moment anymore.”