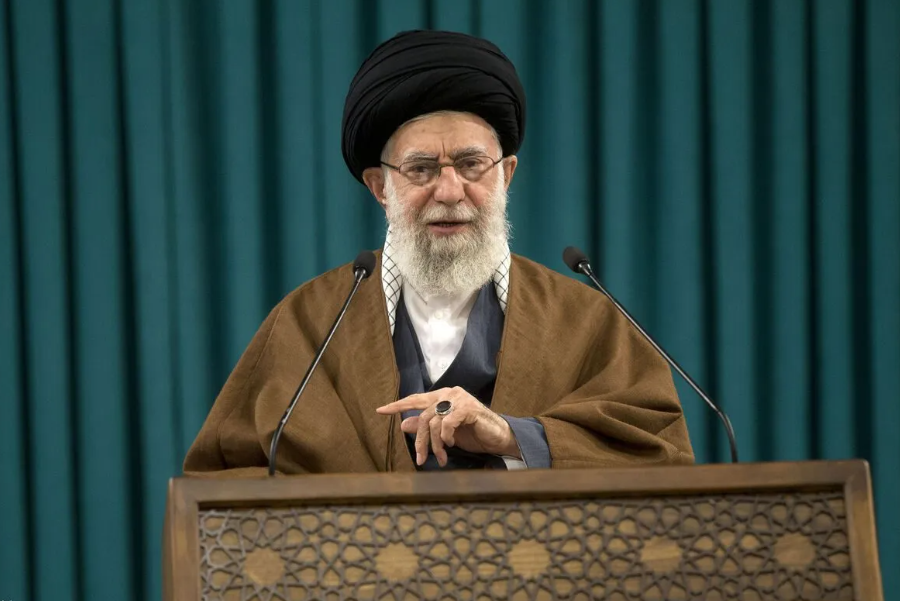 West News Wire: Iran’s fight, according to its Supreme Leader Ayatollah Seyyed Ali Khamenei, is not with a group of rioters who have recently caused chaos in the nation; rather, “the major struggle is with the global hegemony.”

In a meeting with volunteers from the Basij militia in Tehran during Basij Week, Ali Khamenei said, “These few people are either naïve, uninformed, or mercenary.”

According to Ali Khamenei, the West is pressuring Iran in an effort to get it to give up some of its rights in the negotiations, which have stalled due to Washington’s lack of commitment.

“A group of persons who claim to understand politics, but whose newspaper and online articles and analyses actually sadden one, state that in order to end these riots, you should solve your problems with US and listen to the voice of the people,” the Iranian Leader said.

In the Joint Comprehensive Plan of Action (JCPOA), a 2015 nuclear agreement in which Iran promised to limit its nuclear energy program in exchange for respite from sanctions, Ali Khamenei made mention of Washington’s ill faith.

The enemy’s persistence on the second and third JCPOAs, which some individuals within the nation were also regurgitating presumably out of carelessness, may be explained, according to Ali Khamenei.

“JCPOA 2 means that Iran entirely gives up its regional influence, and JCPOA 3 means that Iran agrees not to manufacture any strategic or vital weaponry like missiles or drones and pledges to be powerless in the face of assault.”

No zealous Iranian will agree to paying such ransoms, not even those who might not like Iran, according to Ali Khamenei.

Therefore, unless ransom is paid in all fundamental areas and all red lines are breached, bargaining with America would not address any problems.

Additionally, the Iranian Leader flipped the script on those who advocated for Iran to pay attention to the opinions of the people.

On November 4 of this year, the nation shouted its loud voice; did you hear it? In reference to the sizable demonstrations staged all around Iran to commemorate the Iranian takeover of the US embassy in Tehran in 1979, he added, “You ought to hear the voice of the nation instead.

“That massive gathering of more than 10 million people during Martyr Soleimani’s funeral was the voice of the country. Today, the cries of the people against terrorists and rioters at martyrs’ funerals in various places serve as the voice of the country. Do you not hear the nation’s voice? Referring to the massive demonstrations that were held throughout Iran after the US assassinated Iran’s legendary commander General Qassem Soleimani in January 2020 and current processions held for those who lost their lives in the fight against rioters and terrorists.

The colonial powers’ interest in West Asia, particularly Iran, and their motivations for attempting to rule the region were also highlighted by Ali Khamenei.

“Because the West Asian region is the primary hub of oil, energy, and natural resources and the crossroads between East and West, Western colonialism, which was initially embodied by Europe and afterwards by America, paid special attention to our region.

So that the West would have a stronghold in the West Asia region to loot resources, start wars, and sow division, he claimed, “this is why the phony and usurper Zionist authority was founded in this region.”

Iran, according to him, is the most significant and delicate point in the strategic West Asian region.

Ali Khamenei said, “Therefore, in order to have total dominance, first the British and later the Americans made a specific investment, especially for raising mercenaries in Iran.

He claimed that the 1979 Islamic Revolution “suddenly shattered the doze of the colonialists and gave a devastating, dizzying and stunning blow to their colonial policies” in Iran, “at the focal point of the Western colonial authority in West Asia.”

He claimed that the Islamic Revolution gave the region a new identity and served as a powerful bulwark against the influence of the West and America in the area.

The Islamic Revolution changed the nation’s identity from one of reliance into one of strength, independence, and speaking from the position of power and not paying ransom. This thinking was naturally not limited to Iran and had an impact in the region.” he added.

Ali Khamenei addressed American conspiracies against Iran, which, according to information from “prominent figures,” started by focusing on Iran’s supporters.

“Their strategy was to topple the six nations of Iraq, Syria, Lebanon, Libya, Sudan, and Somalia in order to undermine Iran and ultimately lead to its own destruction by destroying Iran’s strategic depth and extension in the area.

However, he added, “this revolution’s thinking and expansion into Iraq, Syria, and Lebanon were successful, and a major and vital work was done, which was the defeat of America in these three nations.

One of Imam Khomeini, the late leader of the Islamic Revolution, best initiatives, according to the Iranian leader, was describing the group as the school of love and spirituality.

“Basij must appear in all settings and sectors. It serves as a body to serve people without any expectations, not just as a military force.

The Iranian leader claimed that Basij forces had achieved progress in science and that several of Iran’s well-known nuclear scientists who had been killed by the adversaries were Basij members.

Ali Khamenei stated that Basij forces give their lives or suffer injuries in order to protect the people, citing recent riots in which they confronted vandals and suffered fatalities or injuries.

Finally, the Iranian Leader urged state officials to keep a close eye on the developments, pointing out that the adversaries are attempting to control people’s thoughts and shape public opinion by disseminating lies and fake news.