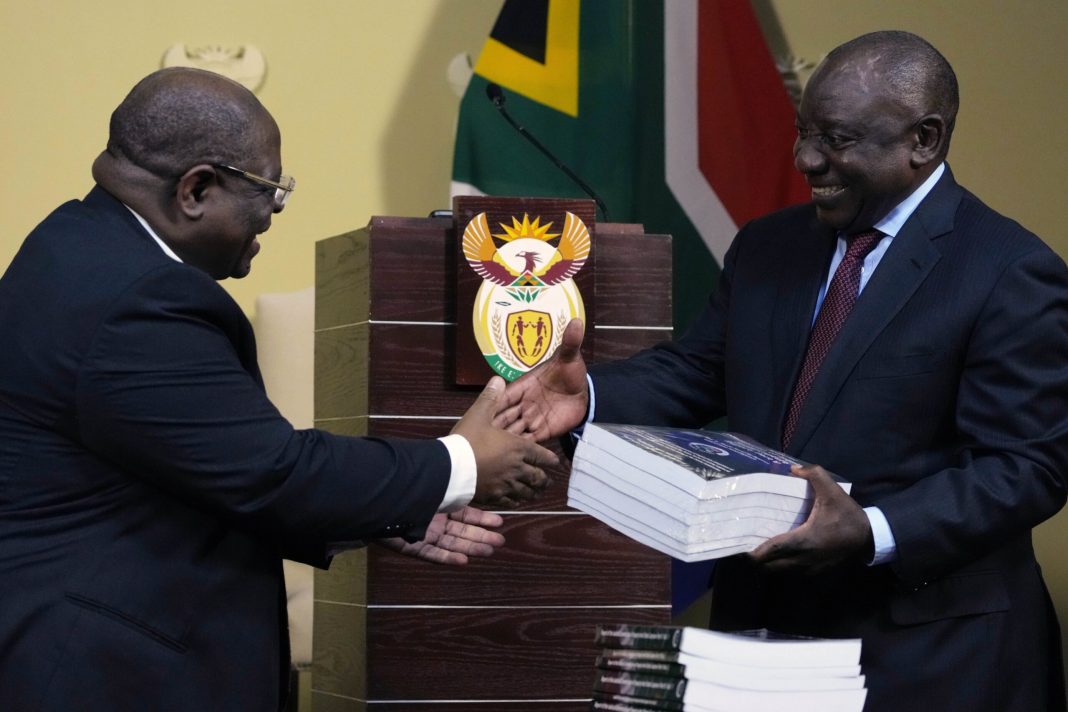 West News Wire: The final chapter of a report on a thorough judicial investigation into corruption has been given to South African President Cyril Ramaphosa.

The final draught of the report, which is said to be 1,000 pages long, was given to Ramaphosa by Chief Justice Raymond Zondo. The earlier parts of the report have exposed the widespread corruption in government and state-owned businesses from 2009 to 2018 under former President Jacob Zuma.

Ramaphosa stressed during his speech at the delivery of the final chapter that he was unaware of the conclusion, not even the commission’s conclusions based on his own testimony.

“The chief justice has never once expressed a desire to talk about the evidence I provided to the commission. He has also stated that he has one or two chapters that deal  with evidence that I presented at the commission but I don’t even know what that is because of the high regard I have for him,” said Ramaphosa.

“He could have made a negative finding against me, which I will accept,” Ramaphosa said.

Ramaphosa has already received four installments of the report which have been made public and have damning findings against politicians and business people linked to his ruling African National Congress party. The earlier parts of the report recommended that many people be criminally prosecuted.

The last segment of the report is expected to detail corruption in South Africa’s intelligence department, the State Security Agency, which was headed by former intelligence chief Arthur Fraser during Zuma’s tenure.

Fraser was later appointed head of the country’s prisons and controversially approved Zuma’s release from prison on medical parole. Zuma was he was jailed for refusing to testify before the judicial commission chaired by Chief Justice Raymond Zondo.

Fraser is currently at the center of the controversy engulfing Ramaphosa because he lodged a criminal complaint alleging that the president covered up the theft of about $4 million in foreign currency from his Phala Phala game farm in the northern Limpopo province.

The scandal dubbed Phala Phala-gate in South Africa’s lively press has tarnished Ramaphosa’s anti-corruption reputation and has prompted calls by opposition parties for him to step down.

The release of the final chapter of the report has been delayed as it was initially set to be handed over to Ramaphosa and released to the public last week, raising the ire of main opposition party Democratic Alliance.

The report is also expected to deal with allegations of wrongdoing at the country’s state-owned public broadcaster, the South African Broadcasting Corporation.

The institution has already been fingered in wrongdoing by earlier versions of the report which dealt with how money flowed from the broadcaster and other state-owned companies to sponsor projects of The New Age newspaper, which was controlled by the controversial Gupta family.

The Guptas allegedly used their close ties with Zuma to influence his cabinet appointments and to win lucrative contracts from government departments and state-owned companies.