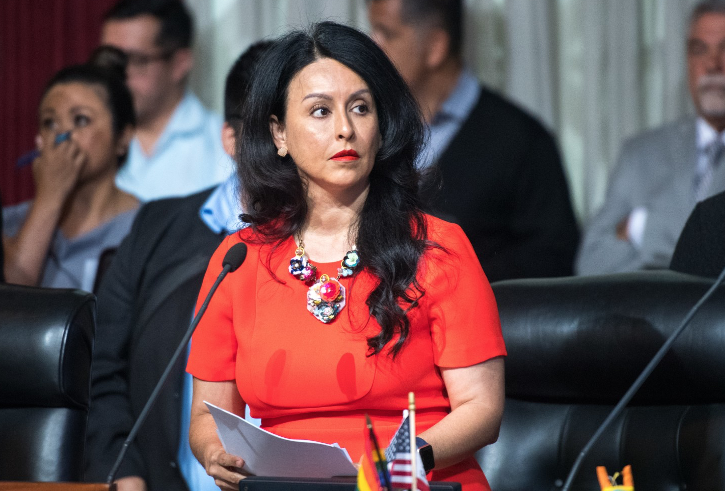 West News Wire: Nury Martinez, the president of the Los Angeles City Council, resigned after a recording of her making racial and derogatory remarks about other council members surfaced.

Martinez will still serve on the city council but will no longer be in charge.

“There are no justifications for my words, and I accept responsibility for what I said. Sorry again, “Monday, Martinez stated in a letter.

In a video of three Latino council members of Los Angeles, Martinez allegedly called the Black son of white council member Mike Bonin a “accessory.” The recording was anonymously shared to Reddit before being taken down; nevertheless, the Los Angeles Times reviewed the recording and confirmed its authenticity.

“I sincerely apologize to the people I hurt with my words: to my colleagues, their families, especially to Mike, [his husband] Sean [Arian], and your son,” Martinez wrote in the letter announcing she would step down as council president. “As a mother, I know better and I am sorry. I am truly ashamed. I know this is the result of my own actions. I’m sorry to your entire family for putting you through this.”

Bonin said on Twitter Sunday that Martinez should step down as president and resign from the city council along with Gil Cedillo and Kevin de León, the other two council members on the tape. Martinez also remarked on the tape that the child, who was just a toddler at time, was misbehaving on a parade float and needed a “beatdown.”

“We are appalled, angry and absolutely disgusted that Nury Martinez attacked our son with horrific racist slurs, and talked about her desire to physically harm him,” Bonin wrote. “It’s vile, abhorrent, and utterly disgraceful. The city council needs to remove her as Council President immediately, and she needs to resign from office. Any parent reading her comments will know she is unfit for public office.”

In response to Martinez’s comment that Bonin was using his child as an “accessory,” de León compared it to Martinez’s “Goyard bag or the Louis Vuitton bag.”

“There were comments made in the context of this meeting that are wholly inappropriate; and I regret appearing to condone and even contribute to certain insensitive comments made about a colleague and his family in private,” de León said in a statement Sunday. “I’ve reached out to that colleague personally.

“On that day, I fell short of the expectations we set for our leaders and I will hold myself to a higher standard.”

Los Angeles Mayor Eric Garcetti said the appropriate response from the council members would be to resign from their positions.

“Bigotry, violence, and division too often live in unseen and unheard places, but have severe consequences on the lives of our fellow Angelenos when they are not confronted and left to infect our public and private lives,” he said in a statement. “Stepping down from the council would be the right response by these members in a moment that demands accountability and healing at a time of great pain and deep disappointment.”

“I’ll spend my remaining days at City Hall moving kindness, transparency and respect forward as core values of our city. This is the time to not only stand up to the things we are against, but to do the hard work of bringing about the things we are for, a city of belonging and accountability,” Garcetti said.

On Tuesday, White House press secretary Karine Jean-Pierre said President Joe Biden was “glad to see” Martinez’s resignation and added that all participants in the conversation “should resign.”

The offensive comments came during a meeting discussing redistricting in the city. At one point, Martinez also calls Bonin when saying a fellow council member should take the area of the city, including Los Angeles International Airport, away from Bonin.

De León is considered a star in the Democratic Party in Southern California. He ran for mayor this year, but lost in the primary in June. His current city council seat isn’t up for reelection until 2024.

Martinez, whose seat also extends until 2024, has served in the city council since 2013. Cedillo is already leaving the council, as he lost his primary election in June and will be replaced later this year.

All four city council members involved in the controversy are Democrats.