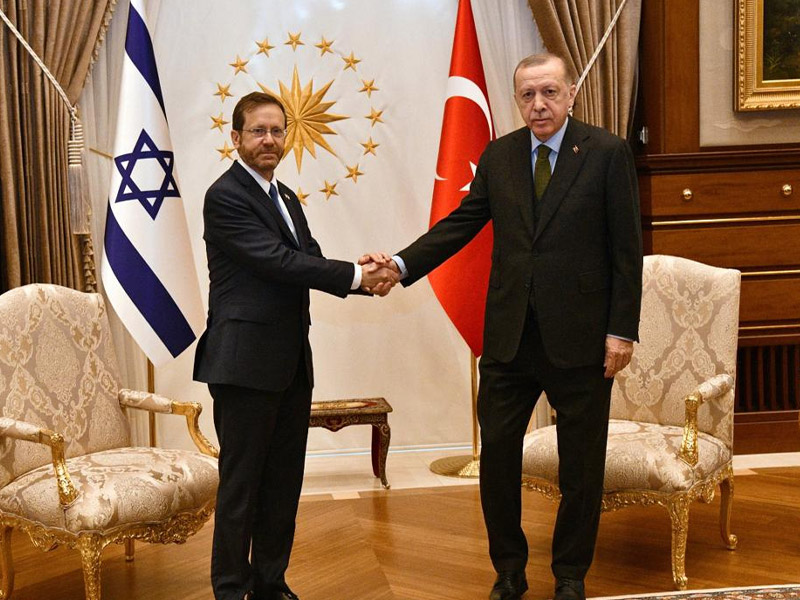 West News Wire: Hundreds of protesters gather at Taksim Square against visit of Israeli president Isaac Herzog to Turkey. The demonstrators swore to defend the Palestinian cause and rejected any normalization with the Tel Aviv regime.

Herzog was set to travel to Turkey on Wednesday in a bid to mend the sour relations between Tel Aviv and Ankara.

After then-Israeli Prime Minister Benjamin Netanyahu apologized to Turkey and the Tel Aviv regime paid $20 million in compensation to the victims of the humanitarian mission, relations between the two countries began to improve in 2013. Turkey and Israel reappointed ambassadors as part of the reconciliation deal in December 2016.

Relations broke down again in 2018, after Turkey, angered by the United States moving its embassy to the occupied al-Quds, once more recalled its ambassador from Israel, prompting the Tel Aviv regime to also recall its envoy.

Herzog’s two-day visit to Turkey marks the highest-level trip by an Israeli official since former Prime Minister Ehud Olmert’s 2008 visit. The visit comes upon the invitation of Turkish President Recep Tayyip Erdogan, according to the Israeli presidency. It also follows a series of public quarrels between Erdogan and Netanyahu, who occasionally attacked each other in recent years.

Erdogan has called Netanyahu a “terrorist,” an “occupier,” and a “tyrant.” But the Turkish president announced last month that the Israeli president would visit Turkey in March, saying it would be good for Turkey-Israel relations. He also said a possible gas partnership would be on the agenda of Herzog’s visit.

Before his departure for Turkey, Herzog said relations between Israel and Turkey were important but added that, “We will not agree on everything.”