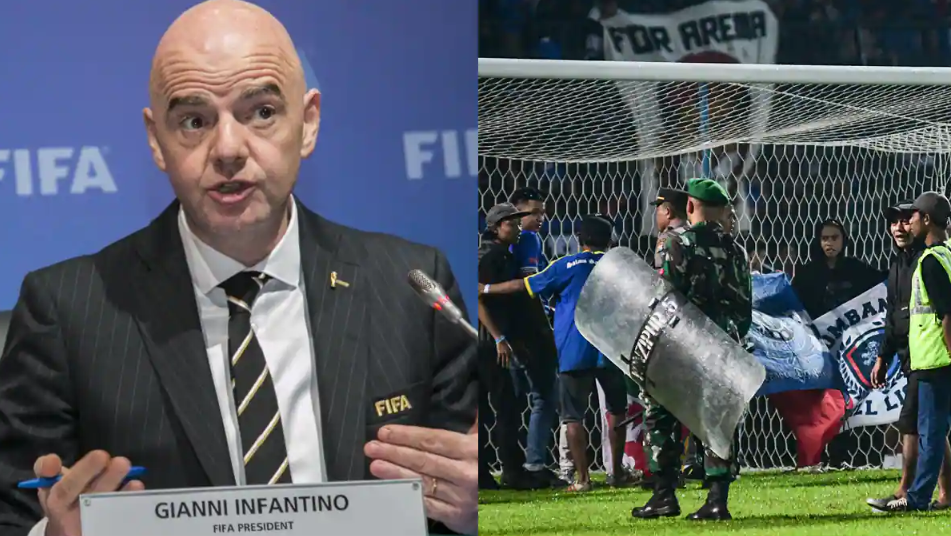 West News Wire: In response to the horrific stadium violence that killed at least 125 football fans on Saturday night in Malang, Indonesia, FIFA president Gianni Infantino has issued a statement.

The sad incident happened after Arema FC’s 3-2 Liga 1 loss to fierce rivals Persebaya, when police used tear gas to disperse fans who had entered the field.

Many people died as a result of suffocation when panic swept across Kanjuruhan Stadium and led thousands to rush for the exits.

Infantino stated that the football world was “in a state of shock” and that it was a “sad day for those engaged” with the sport in response to a catastrophe that he described “beyond comprehension” and which also resulted in hundreds of fans being hurt.

Infantino extended his deepest condolences to the families and friends of the victims and offered his thoughts and prayers to them, to those injured, and to the people of Indonesia.

Persebaya fans had been banned from buying tickets for the match due to fears of clashes. On Instagram, Chief Security Minister Mahfud MD posted that 42,000 tickets had been sold for the game at a stadium that has a capacity of 38,000.

Indonesian President Joko Widodo called for the tragedy to be the last “in the nation,” and ordered the suspension of all Liga 1 games pending an investigation.

The death toll in Malang was quoted at as high as 174 but has since been revised to at least 125 fatalities.

Saturday’s calamity takes its place on the list of the worst of all time at football matches alongside a 1964 stampede at a Peru versus Argentina Olympic qualifier in Lima that saw 320 people killed and 1,000 injured.

In 1985, 39 people died and 600 were left injured at the Heysel ground in Brussels, Belgium, when mostly Juventus fans were crushed against a wall that collapsed during their team’s European Cup final against Liverpool.

The fall-out from the incident resulted in English club teams being banned from European competitions for six years.

Four years later, in 1989, 97 Liverpool fans were killed when they were crushed at Hillsborough in Sheffield in a FA Cup semifinal tie with Nottingham Forest.